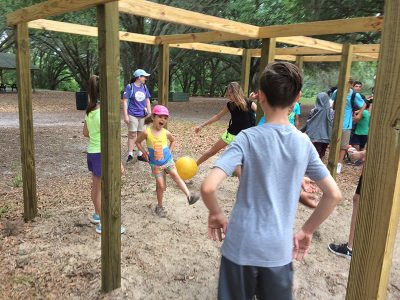 Kids enjoying their summer at the YMCA’s Camp Cristina are encouraged to unplug from their phones and tablets and enjoy the outdoors, honing their social skills. Photos Courtesy of Camp Cristina

They put down their cell phones and tablets, swim in the lake, race across the zipline, splash in the pool with new friends or dabble in art.

Camp Cristina, the 65-acre YMCA camp in Riverview, is currently hosting about 440 kids each week for day camp and numerous specialty camps, all meant to help youngsters focus on their social skills, while getting some fresh air and exercise at the same time.

“I think the fact that it’s outside and really a disconnect from technology is the big draw for both parents and kids,” said Camp Cristina Program Director Meagan Springer. “They are learning life skills and social skills, being able to function with their peers and having traditional fun.”

Part of what makes Camp Cristina unique is that it is 65 acres of outdoor space in the center of Riverview, she said.  “And that’s really good because that is something the kids may not have been exposed to.”

“We have your traditional day camp for first through eighth grade and we have specialty camps like horseback riding, fishing camp, high adventure camp and Artrageous Camp,” said Camp Director Mark Battig. “We also have Camper versus Wild camp, which is outdoor-living skills, like Bear Grills meets summer camp,” he said, referring to a popular cable television series. 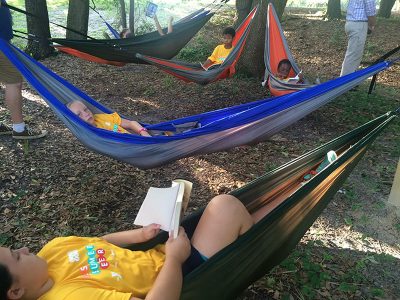 Artrageous Camp focuses on drama and Kids in the Kitchen teaches young ones how to cook. There is also a Paint Ball specialty camp.

“It’s split up pretty evenly, age-wise,” Battig said. “The specialty camps start at third grade and generally you see a lot of kids in those camps. But we also offer a counselor-in-training program for ninth and 10th-graders. We’ll have 20 to 30 in that program. We’ll have six to eight groups with 90 to 100 first- and second-graders and same with third through fifth. Half are in traditional day camp and half in specialty.”

Traditional day camp is about what a family would expect. It includes archery, arts and crafts, STEM (science, technology, engineering and math) projects, swimming every day and activities like the Gaga Pit, Human Foosball and Nine Square in the Air, which is a combination of Four Square and volleyball. “We’ve built nine squares at ceiling level,” Battig said. “They’re up in the air, so they are hitting the ball toward the ceiling.”

Most of the camps stay the same each summer, but as trends change, camps can change, he said. “Mostly, we’ve increased the number of camps we offer, and we fine-tune them.”

Each week, Camp Cristina has a different theme for campers. “For instance, we had Galaxy Galaxy Far Away with a Star Wars theme. With some of the theme days, we try to stay current, but it’s also an opportunity for kids to kind of get away from the phones and gaming consoles and spend time with other kids where they actually do things with kids and build friendships. It helps increase their social skills,” Battig said.

A typical day starts off with meeting the counselors and playing games, then a morning assembly to energize the campers, Springer said.

Springer said, “The morning assembly includes things that get the kids very excited for camp. Jumping jacks, pretending they’re going to climb the rock wall. We also sing songs and do spirit checks to check our spirits.”

One group heads to the pool or lake, while another group may go horseback riding, ziplining or enjoy other outdoor activities.

For those who need to hone their skills or learn to swim, the Tampa Bay Rays sponsor Go For Green, which are free swim lessons, she said. “At the lake, we have the Wet Willie slide, canoeing, the Gaga Pit, beach volleyball or they can swim.”

There is also a rock wall, a challenge course and a vertical playground.

Breakfast and lunch are included in camp, but campers also have the option of bringing their own lunch.

Camps range in price from $145 to $195 per week, depending on the camp and YMCA membership status.

“But we don’t say ‘no’ to anyone,” Springer said. Scholarships are available for low-income families.