PAWS Assistance Dogs raise, train dogs – then go look for veterans to give them to. 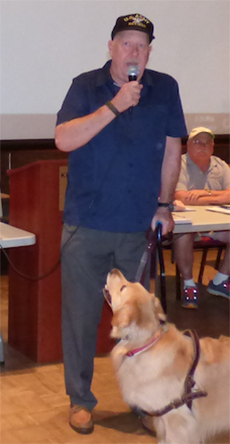 When retired U.S.A. Col. “Rick” Pater was gifted his mobility assistance dog, Rocky, during a ceremony on May 17 at the Kings Point Sportsman’s Club meeting, he turned to the audience and urged them to tell any wounded vets or ones with PTSD (post-traumatic stress disorder) that they know of about PAWS Assistance Dogs. Pater said that local veterans whose lives would be made better by a dog may have applied and given up because of the time it takes to get a dog.

Pater, a Vietnam veteran, was struck by a 122 rocket that left him with a traumatic brain injury (TBI). A component of his TBI is Ménières syndrome, which causes dizziness. These episodes have become more frequent and intense, causing him to lose his balance. Pater can lean on the leather support handle on Rocky’s harness and Rock can also retrieve Pater’s cane, keys or other items he might drop.

“It’s no wonder that wounded vets and those with PTSD give up.”

O’Neil said, “When I picked up the phone to call him, I thought, ‘Okay, I’m going to be speaking to a colonel,’ and when he answered and I told him that I was from PAWS Assistance Dogs, as the conversation proceeded he became almost giddy.”

Two days after the phone call, Pater traveled to the PAWS’ training facility in Naples, Fla., where they raise and train their dogs. There, he would meet the dog that would become his. At PAWS, the dog picks you ­— you don’t pick the dog.

About that meeting, Pater said, “I was alone in a room. Each trainer brought a dog in one by one, and the dog would sniff and walk around and show no interest. They would leave and another trainer and dog would come in. After several dogs, Rocky connected with Pater.  “Rocky picked me,” Pater said.

Thus began weekly two-day trips to Naples over the next three months for Pater to learn Rocky’s commands and work with him. During that time, there were intermittent “sleepovers” with Rocky, they would spend an occasional weekend together, until finally it was time for the two to go home together forever.

Having Rocky means that Pater’s wife, Maria, can leave her husband alone and not worry about him falling. About his dog, Pater said, “My wife is my best friend; Rocky is my second-best friend.”