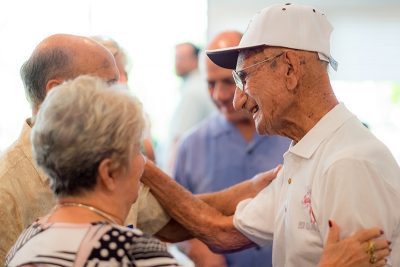 Centenarian Robert “Bob” Miely being greeted by family and friends at his 100th birthday party. He was born on June 1, 1917. Woodrow Wilson was president and World War I was beginning. MITCH TRAPHAGEN PHOTOS

When Robert Miely was born, Woodrow Wilson was the President of the United States. A decent income was roughly $800 per year (for a man, half of that for a woman). There was no national minimum wage. Gas, for those who had a car, cost about 15 cents per gallon; a loaf of bread cost less than a dime and a quart of milk only a few pennies more. The news and the world in which Robert “Bob” Miely entered was ever-increasingly consumed by World War I.

On Thursday, June 1, 2017, dozens of family and friends gathered at the Sandpiper Grille in Sun City Center to wish Bob a happy 100th birthday. A true gentleman, with the appearance and demeanor that defies his centenarian status, Mr. Miely credited swimming every day, red wine and olive oil on all of his salads. Oh, and he also plays golf. When looking at the large crowd gathered for his party he said, “I am amazed. I didn’t expect this many people. I have the greatest children in the world.” 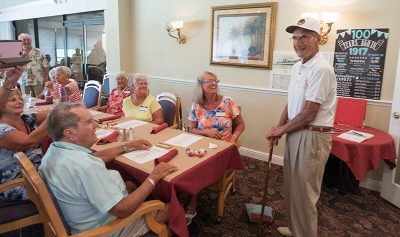 His bright outlook, as noted by family and friends, was apparent. From the words of his children, his life was spent devoted to his family. On Thursday, exactly 100 years after his birth, they, along with their children and dozens of others, took the opportunity to say thank you to a good man and a century of life.