Diners expected to flock to reopening of popular Ruskin restaurant 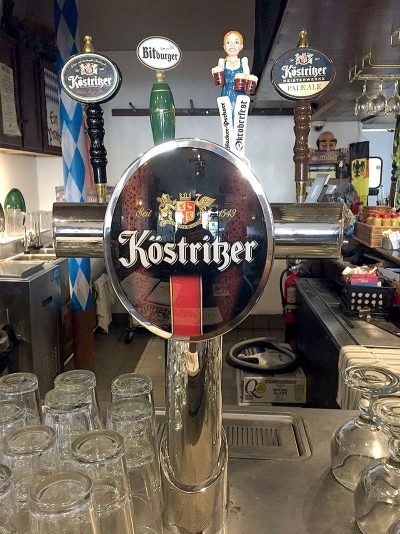 The taps will be flowing once more this week at Old Castle German Restaurant & Beer Barn as it reopens after an almost two-month hiatus so its owners could add more space and seating. Lois Kindle Photo

The well-known Ruskin establishment has been closed since April 3 for owners Ela Tscheu Stubbins and her husband, Stuart, to add 1,200 square feet of space for dining and imbibing to the existing 1,600 they opened with in 2006.

The additional space has an Old World industrial look, with stained concrete floors and zinc, copper and African tigerwood table tops. And it will also soon feature a party table with a self-serve tap.

“It’s not a remodel; we built a whole new restaurant,” Ela said. “We’re excited to have the opportunity to seat a lot more people now, and we’re looking forward to serving our home-cooked food to the community once again.”

To accommodate their customers, the Stubbins have hired 11 additional servers and eight more kitchen staff, a hostess for busy evenings and new front-end manager Trent Burke.

“We’ve added some new menu items like sauerkraut balls, giant pretzels, cheese spätzle and Landjaeger (a semi-dry, smoked sausage), but all of our old favorites are still there. Most are family recipes handed down by my German grandmother.

There are nine starters, including potato pancakes, schnitzel and dip and the knight’s snack (cold, smoked sausage and cheese bites, served with a pretzel). Menu items include goulash soup and a soup of the day; five salads, including the Castle salad (juicy, onion-crusted chicken strips, hard-boiled eggs, olives, bacon and pumpkin and sunflower seeds); 11 sides; nine sausage dishes; nine entrees; nine schnitzels, five desserts and more. There’s also a kids’ menu, lunch menu and list of eight sandwiches. Everything is prepared from scratch

Diners will find the Old Castle German bottles and on-tap beer offerings have gone from five to about 30, including the addition of Köstritzer pale ale. There is also a well-rounded, international wine list.

Originally from Berlin, Ela owned and operated restaurants there before moving to Riverview in 2005 to open The Old Castle German Restaurant in Ruskin the following year. She knew the area from visiting a friend in Summerfield while on vacation. 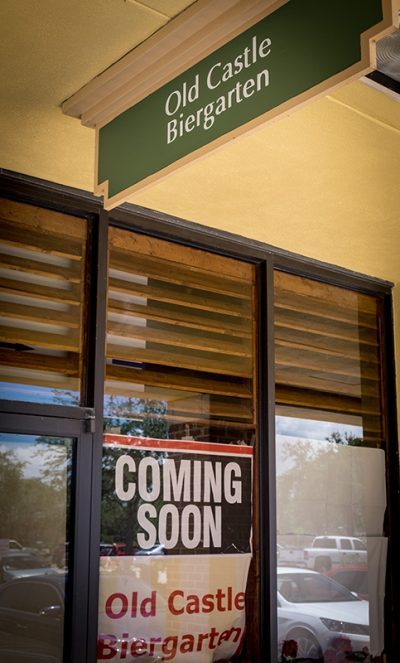 The Coming Soon sign at Old Castle German Restaurant & Beer Barn is coming down this week as the popular Ruskin establishment reopens with a lot more additional space for diners. Mitch Traphagen Photo

“I was surprised to find a large German component to the Sun City Center area,” she said. “Throughout the years, we’ve gained lots of regular customers. People have come from as far away as Sarasota and Naples to Winter Haven and Lakeland, even Ocala.”

She met Stuart in 2007. He was laying brick in the Cypress Village Plaza shopping center, where she had opened the Old Castle German Restaurant the previous year.

Born and raised in Frankfurt, Germany, Stuart came in to try her food. The couple married in 2012 and now own and manage the restaurant together.