Parrish resident took a chance to start his own successful business

Parrish resident took a chance to start his own successful business

Parrish resident Todd Anderson had worked in the printing industry since he was a high school student in the late 1970s, but always for someone else.

“I was unemployed for a year when I decided I had to change my mindset,” Anderson said.

While looking for a new job he said he realized he could make a part-time enterprise he started when he moved to Parrish in 2004 his full-time career. 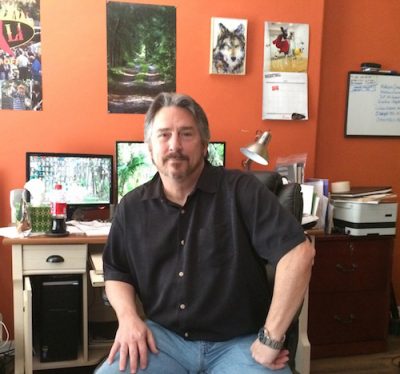 CARL MARIO NUDI PHOTO
Parrish resident Todd Anderson sits in his home office for his business, Parrish Marketing and Design, which he started in 2007.

Since then, Parrish Marketing and Design — soon to be renamed Anderson Graphics — has been providing Anderson with an income to help raise his family with his wife of 14 years, Nadine, in their Foxbrook Communities home.

Nadine Anderson is a teacher at Southeast High School in Bradenton and together, she and Todd Anderson have four children, two older daughters, Jordan, 24, and Shayna, 21; a son, Ian, 20; and a younger daughter, Aliyah, 12.

“We’re definitely a ‘hers, mine and ours’ family,” Todd said.

Todd, 59, came to Manatee County in 1971, moving down from Fort Thomas, Ky., when his father came to Bradenton to manage a printing business, Joyner’s Franklin Press, on Sixth Avenue West.

That was where Todd learned the printing business, working part time after school and full time after graduating from Manatee High School in 1976.

He took art in school and would do graphic and logo design work for his father’s customers.

During his nine years working with his father, Todd also learned all the new technology changes the printing industry was experiencing.

Computer knowledge was becoming essential in the printing industry, and Todd learned all he could.

When Franklin Press closed in 1986, he got a job at the Bradenton Herald.

He started as a process camera operator, but moved up the ranks to become the pre-press operations supervisor.

Anderson worked at the Bradenton Herald for 13 years before taking a position at the Sarasota Herald Tribune.

When he applied at the Sarasota newspaper it was for an opening on the web-design team, but was not given that job.

“I had the knowledge but didn’t have the degree,” Todd said. “I went back to school knowing I needed a degree to advance.”

After a while at the Sarasota Herald Tribune, Todd was promoted to run the newsroom imaging department until 2006, when digital photography replaced the work he was doing. 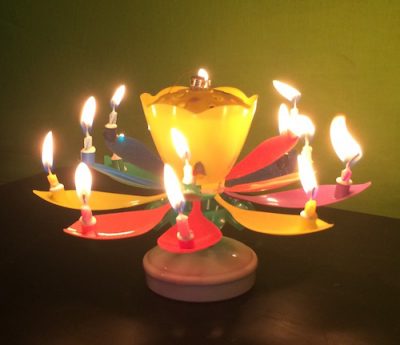 CARL MARIO NUDI PHOTOS
The Amazing Candle, a musical birthday candle shaped like a lotus flower, “blooms” when lit and turns while it plays the tune “Happy Birthday.”

He was moved over to the newspaper’s television news affiliate, SNN, as an assistant producer and eventually became the station’s graphics’ editor because of his computer knowledge.

He worked at SNN for almost two years before being laid off.

“It was only six months before I was to receive my college diploma,” Todd said.

The year of looking for new employment gave him the opportunity to expand his part-time web design business.

It was an easy transition for Todd.

“I started web design when it was in its infancy,” he said. “I wanted to put up a website with pictures so my family could see my new son.”

He would post photos of he and his brother, Doug, traveling around the United States, with his son Ian.

“Ian was a lap baby,” Todd said, referring to all the photos of him in an airplane seat with his son on his lap.

“It was kind of an experiment,” he said of his first website. “I would use it as a test site as I learned coding.”

Todd got his bachelor degree in visual communication and went on to earn a master degree in instructional technology, providing him with the skills to train others to use computer applications in teaching.

His computer skills include knowledge of Photoshop, Illustrator, Flash, HTML and most of the other applications needed to create a marketing strategy for any business, Todd said.

He said the success of Parrish Marketing and Design is in the full-service products it offers.

Ruth Brown said her Lakewood Ranch marketing and product development business has been very successful in part because of Todd. 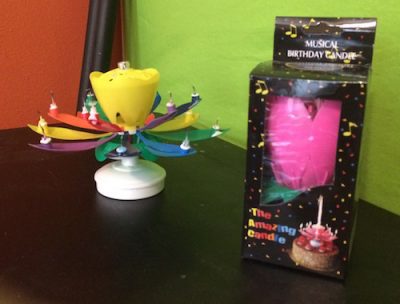 The Amazing Candle, a musical birthday candle, is one of the successful products Todd Anderson helped market through his home-based Parrish Marketing and Design.

“Todd has been able to get our product going,” Brown said. “Sales have been growing and growing.”

Her daughter, Candice McElyen, worked with Anderson at SNN and told Brown about his marketing and design company.

McElyen owns her own public relations firm, 360 Degree Marketing, and has worked with Anderson on marketing campaigns.

Brown’s main product, and name of her company, Wowzza The Amazing Candle is a musical birthday candle.

The candle looks like a closed lotus flower until it is lit and the petals expand downward, each with a lit candle at their tips, while it turns and plays the tune “Happy Birthday.”

Todd created a Facebook page and other social media marketing presence for the candle.

The candle also has been available in Walmart for about 1 and a-half years, Brown said.

“He is so multi-talented,’ she said. “He can provide a complete marketing package — even video.”

For more information about Parrish Marketing and Design, call Todd at 941-504-5518 or visit his website at parrish-design.com.

The marketing firm also can be found on Facebook at www.facebook.com/Parris.Design/?pnref=lhc

For more information about Wowzza The Amazing Candle visit their website at TheAmazingCandle.com or on Facebook at www.facebook.com/TheAmazingCandle/