In conjunction with an upcoming PBS film series called The Vietnam War to be aired on WEDU PBS in September, the station is producing its own 30-minute documentary.

To do this, WEDU is inviting all area veterans of the Vietnam War, those who remember the Vietnam era, those who protested the war and anyone who lived in Vietnam during the war, to provide oral histories of their experiences, which will be filmed at Freedom Plaza, 1010 American Eagle Blvd., Sun City Center, May 24 and June 3.

“By and large, the oral histories we record will be submitted to the Veterans History Project (of the Library of Congress Folklife Center),” said Jack Conley, vice president of content for WEDU. “Some of these could additionally be made into short vignettes to be broadcast and placed online.”

COURTESY PHOTO
All Vietnam veterans willing to share their experiences of the war are invited to one of two filming sessions May 24 and June 3 at Freedom Plaza. To schedule an interview or for information, call 813-642-1275 or 888-467-5202.

Conley said WEDU’s half-hour documentary will feature some of the oral histories and air with the national PBS project on the war.

The Retired Officers Corporation of Sun City Center at Freedom Plaza will facilitate the local interviews for WEDU PBS.

“They want to reach Vietnam veterans in the area, and we have a longstanding partnership with them,” said Connie Lesko, business development coordinator for Retired Officers Corporation. “We also have a connection to the military veterans in the community, so it’s a great fit for us to host these interviews.”

Lesko said all Vietnam veterans, regardless of where they live, who are willing to share their experiences are invited to one of the two sessions. The producers are looking for infantrymen, officers, chaplains, medics and cooks, virtually anyone of any rank and function.

“This is an opportunity for all Vietnam War veterans to provide an accurate account of what transpired during their tours in Southeast Asia,” Lesko said.

What they (and others who participate) talk about can be “good, bad or otherwise,” said WEDU PBS producer Spencer Briggs. “We want them to tell us what it was like.”

The Vietnam War began Nov. 1, 1955 and ended April 30, 1975. Many of the veterans who came home aren’t willing to share their wartime memories, said Mike O’Dell, immediate past president of the Vietnam Veterans of America. “They’re talking about it a little more now. But many have PTSD (Post Traumatic Stress Disorder) and they still don’t want to (discuss) it,” he said. “And the way they were treated when they came home didn’t help.” 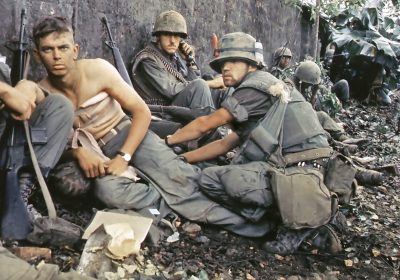 Nevertheless, efforts to learn more about what they went through are important, he said.

Freedom Plaza resident Roger Hassard, 75, one of those who is willing to talk, has an interview on May 24. He served in Vietnam as the commanding officer of a Coast Guard patrol boat in the mid ’60s.

“I’m interested that the Coast Guard gets a hearing,” he said. “There’s a lot that went on that people aren’t aware of. It’s important for them to know what happened there.”

The Veterans History Project of the Library of Congress Folklife Center was legislated by the United States Congress in 2000 and signed into law by President Bill Clinton that same year. The program collects and preserves the personal narratives of America’s wartime veterans. For additional information, visit www.loc.gov/folklife/.