Magic at the Ruskin Family Drive-In

Magic at the Ruskin Family Drive-In

The Ruskin Family Drive-In Theatre turned 65 years old on Easter Sunday. While many theatres have suffered from technology, the Ruskin Drive-In finds support from the community. They don’t take it for granted.

The air mattress was nearly pumped up and the pillows were piled high. It’s movie night at the Ruskin Family Drive-In Theatre. Don’t even think of bringing an air mattress and pillows into a multiplex theatre in a shopping mall. Sure, they have reclining seats now, but nothing beats your own pillows. 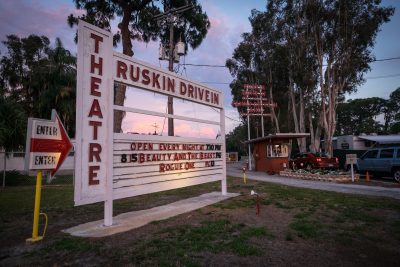 Some people believe the Ruskin Drive-In is the only remaining drive-in theater along the entire length of U.S. 41, from Michigan to Miami.

The air mattress nestled into the bed of a pickup truck, a pizza and snacks came from the snack bar. You would be amazed at what you can find at the snack bar. One item is a veritable delicacy that in all

of my travels around the nation and the world, I’ve only encountered at the Ruskin Drive-In.

“Mitch, can you eat a mistake?” Ted Freiwald asked in his unique warm and friendly manner. Ted owns the theatre with his wife Karen. The theatre turned 65 years old on Easter Sunday. That was also Ted’s birthday; he has celebrated a few more.

A chili cheese dog slid across the counter. At my age and expanding girth, I really didn’t need a chili cheese dog, but how could I refuse such generosity? I accepted the gift and walked out of the snack bar, trying to figure out how to begin with it.

I took one bite and my world changed. I changed, too. I quickly moved from the side of the snack bar to the back of it where fewer people were likely to witness what was to come: an adult male transformed into a ravenous wolverine, devouring that chili cheese dog like it was the first and last food on earth. I then lowered my dignity and myself further by licking out the remnants from the paper tray that, only seconds before, had cradled one of the finest foods I have ever had the pleasure to experience. No doubt I made a sorry excuse for a civilized human, what with chili and cheese all over my face, but what I was most sorry about was the poor person who ordered wrong and missed out on it.

That was no ordinary chili cheese dog. It had secret ingredients. 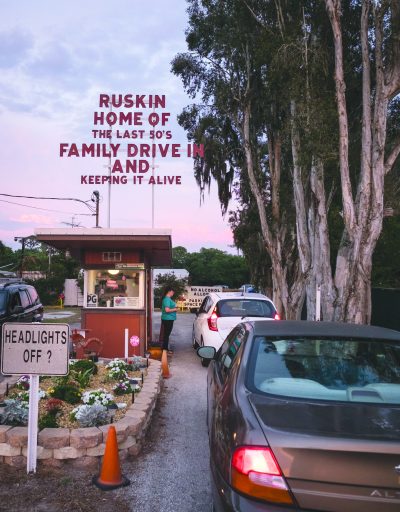 Karen Freiwald will happily share the recipe with anyone who asks. She even told me I could print it for this article. But I think it best for you to experience it for yourself. You’ll thank both of them and me for it later.

The last remnants of a glorious Florida Gulf Coast sunset painted the horizon. It was movie time. As always, it began with a reminder by Ted about this being a family theatre, that no alcohol was allowed, along with a few other words not everyone expects to hear these days.

But it works. The Ruskin Drive-In, not unlike their chili cheese dogs, is a very special place. You could continue driving south on Tamiami Trail, U.S. 41, and not encounter another drive-in. Some believe that you could follow the highway all the way north to Michigan’s Upper Peninsula and not encounter a single one. This drive-in truly does stand alone.

The drive-in is certainly affordable. Regular customers often tell Ted and Karen that they should really raise their prices. But they don’t, and they won’t. Entire generations have visited the drive-in. It is a place for couples and for families.

“Some have been coming here all of their lives,” Ted continued. “And then they bring their own kids.”

The drive-in has faced its share of challenges and always the community has stepped forward to help. One was an enormous property tax increase during the housing bubble more than a decade ago. The drive-in simply could not afford it — even if full each and every night, the ticket capacity just wasn’t there to pay that kind of tax increase. The community stepped forward and made their opinions known to county officials and, before long, relief was granted. 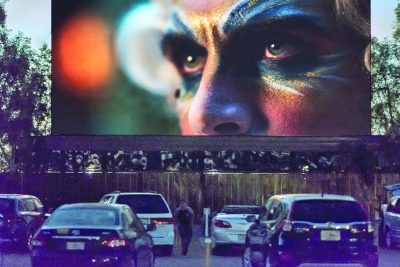 MITCH TRAPHAGEN PHOTOS
The movie begins at the Ruskin Family Drive-In. Technology could never replicate what the drive-in provides. The theatre is a special place for families, for couples, for everyone. It is a jewel in South Hillsborough.

Another challenge was in converting from an old film projector to a modern digital projector. Movies don’t come on film reels anymore — they come electronically. Again, the community stepped forward and the money was raised for an expensive digital projector. Any funds left over were not pocketed by Ted and Karen but were instead donated to charities.

“We couldn’t have done it on our own,” Ted said. “But we couldn’t walk away from something like this.”

Despite the challenges, there are no real problems. There are no drunken brawls, there are no pornographic films. Ted and Karen have created an affordable, safe and fun place for families to re-connect over a first-run movie.

Yes, that’s right. The Ruskin Drive-In gets first-run movies on the same day that the largest theatre chains, even those in Los Angeles or New York get them. Karen manages that by simply doing what is inherent to her: being a nice person. She knows the people at the production houses and distributorships. She doesn’t forget their birthdays, anniversaries or other important events. Her kindness is repaid, as it usually is, and the only theatre in South Hillsborough will be showing the next installment of the Pirates of the Caribbean, starring Johnny Depp, on May 26, the same day it will premiere in New York City. 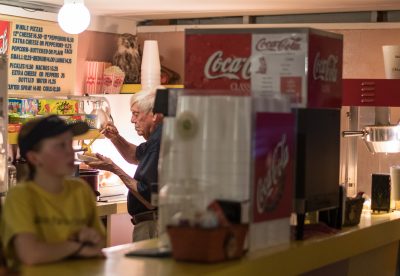 Ted Freiwald making up a delicacy for which words cannot do justice. You have to experience it for yourself.

“A while back a big guy came over and handed me some cash,” Ted said. “I asked, ‘What is this for?’ He told me that he had noticed a car sneaking in through the driveway out and didn’t want us to lose money because some people do bad things.”

The man wanted to make sure the drive-in would be here. Tomorrow, next year, through many more years.

The movie is running, people are kicking back in lawn chairs or in pickup beds staring at the big screen with just the faintest remnants of light in the sky, just enough to highlight the trees and to remind you of the freedom of a drive-in theatre. People are holding hands and guys have their arms around their girls. Some say the good old days are gone, but they are still here — and you can find them at the Ruskin Drive-In. A few people use the metal speakers for old time’s sake but most tune into the digital stereo sound available on their FM radios. 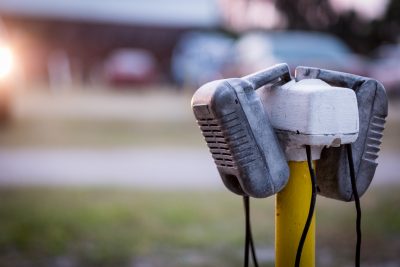 Although the old-style speakers still work, most people today use the high quality sound transmitted to their FM radios.

Talking with Ted and Karen over the snack bar counter, there are stories, enough stories to fill a book. There was the young man on vacation with his new bride. He only had a credit card, not the cash needed for popcorn and sodas, but Karen made sure that he went back to his car and his wife carrying both. It was just doing something nice for someone.

It is the snack bar that keeps the theatre in business. Ticket sales barely cover the cost of movies (many with draconian rules that help the producers and distributors but can hurt small, family-owned theatres). It is the snack bar that pays the bills and provides a living for Ted and Karen. The prices are more than fair, much less than most multiplex theatres, and the food is excellent with any number of wonderful surprises. Most everything served is popular.

And so, it hurts when people load up their cars with food before arriving at the theatre.

“I guarantee you that a fast food restaurant won’t show you a movie when you buy food from them,” Ted said with a smile, although with some poignant reality mixed in. One customer tried to order a pizza for delivery from a place a few miles up U.S. 41. The excellent pizza in the snack bar is served fresh out of the oven. 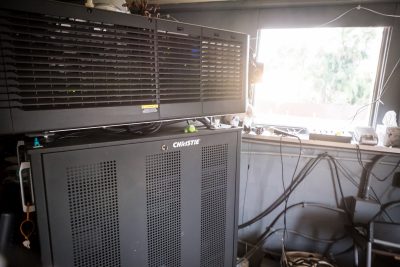 The Ruskin Drive-In is an experience that is unmatched; it cannot be replicated by technology. It is a special place ­— a place where children play and parents meet friends old and new. Being there is like being home — the home we all imagine as a remarkable place; a remarkable experience. Some people, like Ted and Karen, give off positive energy. They care — about their customers, both new and old; they care about the community and the families who live here.

I can’t remember the last time I’ve felt so comfortable, so relaxed, so at home as I did during my time in the theatre. That is the something special that Ted and Karen have.

It’s right on U.S. 41. There, the magic begins long before the screen lights up. 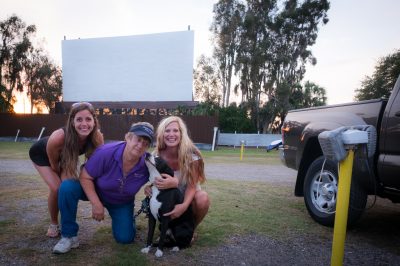 Before the double-feature begins: Karen Freiwald with Megan Shaffalo, Marisa Nooney and dog Cookie. Along with air mattresses and your own pillows, don’t try to bring your friendly dog to a shopping mall multiplex theatre, either. 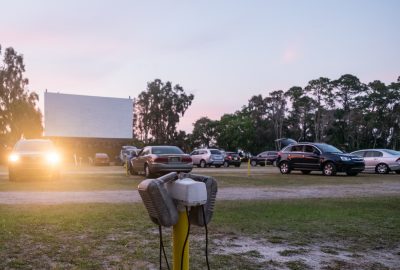 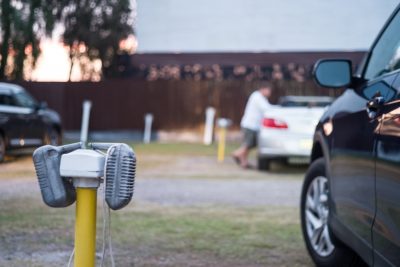 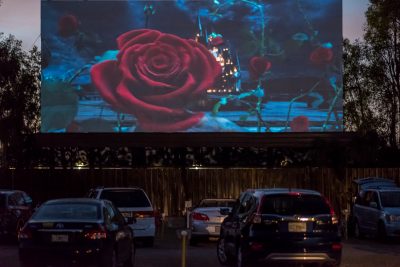 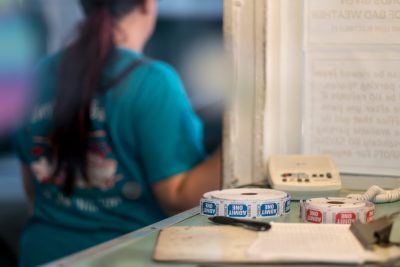 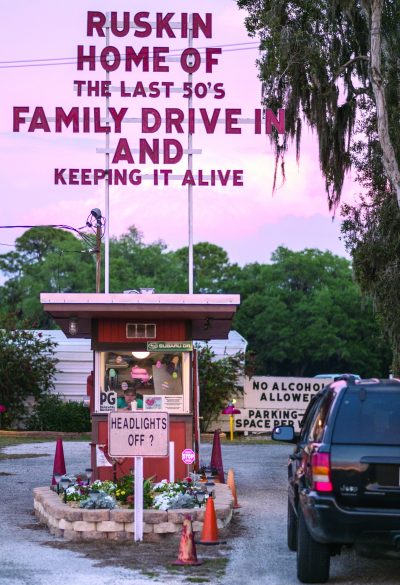