Home News Farewell to a good man and a friend
News

Farewell to a good man and a friend

Farewell to a good man and a friend

Brutus was the best dog. Nothing seemed to ruffle his feathers….or, rather, his fur. Like straight out of a stereotype, he would actually fetch the newspaper from the driveway. Who knew dogs actually did that? He was kind and patient to a seemingly infinite degree. He was also the long-time fishing buddy to my friend and one-time neighbor, Steve Fagen.

Eventually, due to advancing age, fishing became a challenge for Brutus but spending time with Steve, his human, was so important that he chose taking on the challenge, even if it may have hurt a little.

Until he no longer could. 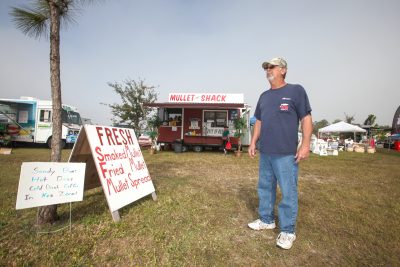 Steve Fagen was omnipresent at South Hillsborough events. He is pictured here at a recent Ruskin Seafood Festival. He was a good man and a good friend — to me and so many others.
Mitch Traphagen Photo

Not long after, Brutus left this world confident that Steve was able to fish without him. But he left a ripple in the universe. The world seemed less bright, less wondrous without Brutus in it. When we were neighbors, I would often see Brutus out front, never leaving the yard without permission, never wanting to, either. I would stop and tell Steve that someday I would dog nap him. While I scratched his graying fur he would look at me with his big brown eyes that had so much behind them…emotions, thoughts, loyalty, intelligence and more.

Last week, unexpectedly, heartbreakingly for those of us who remain, Steve Fagen joined his beloved Brutus somewhere over the Rainbow Bridge. The image of the two of them reunited is the only thought that provides some measure of comfort in this world, suddenly made less wondrous, less happy and palpably colder in Steve’s absence.

I honestly can’t imagine not seeing Steve’s smiling face on my frequent trips down my former street.

I can’t imagine South Hillsborough without the “Mullet Man,” a man who cared so deeply about his family and his community that he continuously gave of himself.

I can’t imagine going to an area event without him there.

I can’t imagine not seeing him and his red “Mullet Shack” on Saturdays at U.S. 41 and Big Bend Road.

I can’t imagine no longer having his inspiration — the man who did what he needed to do for his family and would always do what he could for his friends. And nearly everyone he met was his friend.

I can’t imagine that a man so full of life is no longer in this life. No one was more full of life than Steve.

I can’t imagine that I will no longer be able to revel in his photos from his fishing experiences.

I can’t imagine not seeing his words of “Uh oh” with a photo showing dark clouds taken from his boat somewhere on the bay.

Most importantly, I can’t imagine the grief felt by his son and his lovely, gentle, and generous wife, Bridget.

But I can certainly feel a little of it. When I heard the news, my reaction was disbelief. It was not possible. I told my wife, Michelle, and her response was, “No….no….no…”

The tears that formed in my eyes betrayed my refusal to believe it.

Steve was among the most dedicated, passionate, honest and hard-working men I’ve known. He always did what he had to do, even when that must sometimes have been difficult. And still, he had a smile for anyone he encountered.

He always overcame the challenges in life with such dignity and always with a positive attitude. And he faced some significant challenges. His smile never faded, though. His heart never turned cold. Somehow he became an even better man for all of it.

Though most people knew him as the “Mullet Man,” I never really called him that. I’ve been fortunate to have called him a friend.

I am so happy that you are with Brutus, Steve. I am so sad that you are not here with us, with your son and loving wife. I can only hope that, like Brutus, I’m worthy of seeing you again someday.

A celebration of Steve Fagen’s life, a man who touch so many, will be held at 11 a.m. on Saturday, April 22 at E.G. Simmons Park in Ruskin. There is a mandatory $2 per car entrance fee collected by Hillsborough County.