Home News From the Bronx to Brandon
NewsFeatures

Sitting on a bed in Room 304 at Brandon Health and Rehabilitation Center, holding hands with Bessie Walker, a 92-year-old African-American great-grandmother whose strong grip belies the health issues that got her here. That same grip is now channeling healing love into me. She puts one hand on my head and murmurs, “Lord, thank you for sending Susan to me to be my child.” 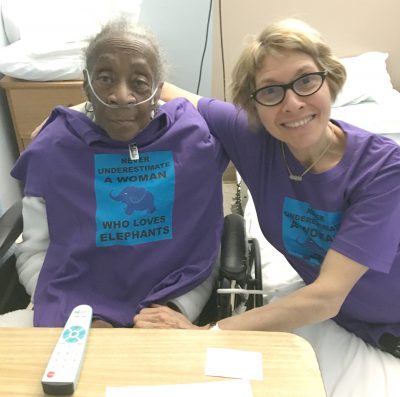 Ninety-two-year-old Bessie Walker is presented with her new T-shirt that says “Never Underestimate A Woman Who Loves Elephants” presented by her dear friend and adopted child Susanne Katchko from Walker’s hometown of Bronx, N.Y.

Bessie and I met four years ago as members of the College and Community Chorus of Lehman College in the Bronx, N.Y. She came onto my radar as the tiny, rich-voiced “Donation Lady” who collected cash from every choir member for our conductor’s semi-annual thank you gifts. You got your money to Bessie within a week or two, because there was no escaping her precise recordkeeping or willingness to approach individual scatterbrains with the dreaded, “I don’t see your donation here.”

I wanted to know her but figured her dance card was full. One week, my opening came when I remarked on her elephant-shaped brooch and she replied that elephants were her favorite.

A few days later, I came upon a vendor of elephant jewelry, picked up a bracelet and gave it to Bessie at our next rehearsal. She responded immediately with a sewing kit from her purse and a friendship was born.

Bessie was a young mom when many of her Bronx peers were Yiddish-speaking Holocaust survivors. She calls me “Mamale, Sheyndale” and I call her “Bessele,” affectionate Yiddish diminutives meaning “little mother,” “little beauty” and “dear Bessie.” Bessie cared enough to become familiar with her refugee neighbors and to honor them by absorbing some of their language and culture. To me, she is a bridge to my own people.

We became phone buddies, and her calls always arrived at the most oddly serendipitous of times. “So, how you doing?” in Bessie’s syrupy alto was like truth serum to me, eliciting tales of triumph and trials at work, and anything else lying on my heart. If it hurt or caused worry, my Bessele would get it out of me and respond with an instructional “fix” that left us laughing. 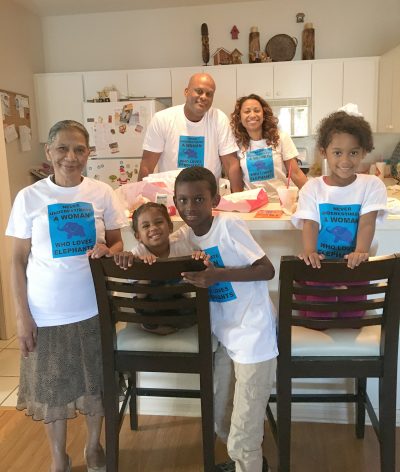 Bessie Walker’s grandson and his family in Apollo Beach. They are Randy and Ingrid Paige and children Raven, Josiah, Jamilla and Julia.

Jimmy, Bessie’s 15-years-younger second husband, died in his sleep next to Bessie on February 13, 2016. Jimmy was her world. Her only child, daughter Claudia Paige, died of acute liver failure in 2014. In stepped Bessie’s grandson and wife  from Apollo Beach, Randy and Ingrid Paige, and their children, Raven, 15; Josiah, 9; Jamilla, 4; and Julia, 2, to open their master bedroom and home to GiGi/Bessie.

Randy is a police officer and DJ of John Saxx Entertainment, the official music provider for the Miami Dolphins.

As our friendship angels would have it, I returned last fall for the second year in a row to lead Jewish High Holiday services as Cantor of the Kehillah of Lakewood Ranch (KLR) in Sarasota. Randy ferried Bessie to our Friday night service and discussion.

When a call to Ingrid revealed that my Bessele was in the hospital and then in rehab, I had to see “Mom.” Bessie had declared me her child during a condolence call after Jimmy’s death and has since taken care of my heart and soul just like a good mama should. My own birth parents are long gone and this “bonus daughter-mom” opportunity has been a win-win for us both.

During this most recent visit, between magical prayers, Bessie murmured, “Write about us. Write about us and show me a copy.”

Deep friendship is a treasure that comes when the heavens decree it. To have found Bessie Walker, a Yiddish-speaking, faith-filled mama and mentor, just when I needed her, could be seen as coincidence, but it comforts me to gratefully agree with my Bessele that she and I were sent to each other right on time.