For the past eight years, the Winthrop Arts Festival has drawn thousands to the intersection of Bloomingdale Avenue and Providence Road to enjoy an outdoor day filled with fine arts and the work of local and visiting artisans.

gain this year, the Winthrop Arts Festival will take place at Winthrop Common, located behind Boca restaurant. Anywhere from 5,000 to 10,000 guests are expected for the juried art show and artisans’ exhibit.
JABRAE FASTING PHOTO

This year, the festival takes place from 10 a.m. to 5 p.m. March 25 and 26 at Winthrop Common, behind Boca restaurant.

The juried art show and artisan collection features 30 individuals showcasing their work. The restaurants of the Winthrop Town Center, including Moe’s, Ciccio Cali, Boca and Remi’s Donuts will offer food for sale.

“We showcase all manner of mediums, from oil and watercolor to photography,” said Kathy Collins, a member of the Winthrop Arts Board of Visionaries and administrator for the Art Factory after-school program.

“In addition to the fine arts, we’ll have someone roasting coffee, glass blowing, jewelry and more,” Miller said. “It’s a nice mixture of artists and artisans.”

Artisan Tim Hoffmeister, of Brandon, will be showing his glass creations this year for the second time. He said he finds the Winthrop Arts Festival to be a huge hit with locals and something the community really needs.

“I had the time of my life last year. It was my very first festival ever, and the very first time I showed my work to the public,” he said. “The Winthrop group made me feel comfortable. I really enjoyed it and it had a pretty decent turnout, even with some rain.”

This year, a live band will perform on Saturday between noon and 5 p.m. 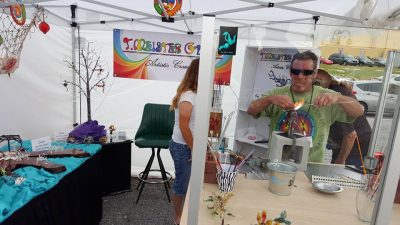 Glass artist Tim Hoffmeister conducts a live demonstration of his glass blowing during the 2016 Winthrop Arts Festival, which runs this year March 25 and 26 from 10 a.m. to 5 p.m. Photo by Roy Yanong.

“The crowd is young, old, kids, grandparents, every ethnicity and people brought their pets,” Hoffmeister said. “It’s a pretty wholesome event. You get the real community feeling when you’re out there.

“It’s a family-friendly event and just a good day out in the Riverview area,” Miller said.

“From an artist’s standpoint, it is a juried show and we have three judges and close to $4,000 in awards for this year,” Miller said.

“Winthrop Arts is creating a bridge between the arts and community in tangible and meaningful ways with a focus on developing and inspiring the next generation of artists and patrons,” Miller said, citing its mission. “By bringing the arts into central focus, we deepen our roots, enrich our local community, expand our global reach, and strengthen our humanity.”

That mission is furthered, she said, through the annual festival and artisan market, as well as through the Art Factory, where Winthrop runs its after-school arts program for children, provides art instruction to home-school students and offers senior citizens from The Bridges Retirement Community the opportunity to take a regular field trip and create art.

This year, for the festival, judges for the juried show are Richard Gaspar, a professor of Mass Communications at Hillsborough Community College; Michelle Moseley, senior development officer for the John and Mabel Ringling Museum of Art; and Kay Sullivan, president of the Winthrop Board of Visionaries. 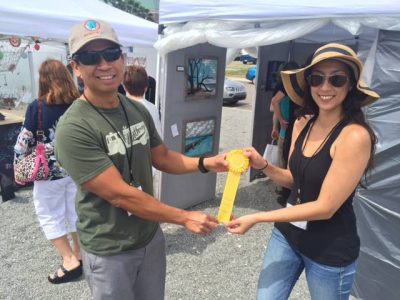 Miller said the judges were selected because of their commitment to the arts.

“The artists and artisans are juried into the show by the Winthrop Arts Festival committee, made up of members of the Winthrop Board of Visionaries,” she said. “We then invite two well-respected individuals, along with the president of the Winthrop Arts Board of Visionaries to judge the artwork of the artists.  Artisans are not included in the judging. We have monetary awards for Best of Show, first, second, third and honorable mention.”

“I think the artisans just like to be a part of a growing festival,” Miller said. For attendees, this year the board has worked really hard to get a lot of the restaurants on board.”

To learn more about the festival, visit www.winthroparts.org/2017-arts-festival-and-artisan-market.