Palmetto High School senior Jacqueline Perez always knew she would attend some kind of institute of higher education after graduating.

Her parents, Angelica and Pedro Perez, would tell her how important it was to continue her education.

“It was important to them for me to obtain more than just a high school diploma,” said Jacqueline Perez, 18, “even if it meant only attending a technical school.” 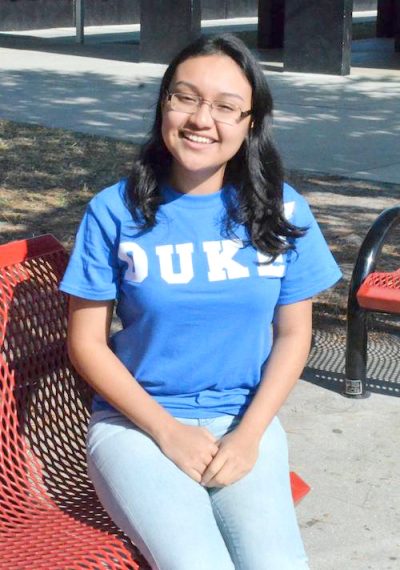 Palmetto High School senior Jacqueline Perez, a 2016 recipient of a $250,000 QuestBridge scholarship to Duke University in Durham, N.C., will be the first person in her family to graduate from high school.

Perez, who will be attending Duke University in Durham, N.C., in the fall on a $250,000 scholarship, said neither of her parents completed school.

Her mother only went to middle school and her father did not finish high school.

“They were just starting out and had to take whatever work opportunities were available,” Perez said.

Being the first person to graduate from high school in her family was a big motivation to achieve her goal, she said.

Perez was one of 767 high school seniors nationwide, out of 14,491 applicants in 2016, to receive full scholarships through the QuestBridge College Match program.

Each student was matched to one of the 38 participating colleges and received a full, four-year scholarship, including tuition, room and board, and other expenses.

“Jackie sets a precedent that hard work and perseverance can lead to life-changing opportunities,” Greene said.

She said QuestBridge was providing opportunities to students who may not otherwise have the means to attend some of America’s most prestigious colleges and universities.

“And there is a former QuestBridge scholar working at Palmetto High School, who helped Jackie celebrate her accomplishment,” Green said.

Andrew Vasquez, a Palmetto high faculty member, was a 2012 QuestBridge scholarship recipient and graduated from Stanford in 2016.

Perez applied to these six and received acceptance letters from four, and chose Duke.

“Duke was always in the back of my mind as a university I wanted to attend,” she said, “but I wasn’t sure if I could qualify.”

She said she heard great things about their medical program, and Perez wants to be a medical doctor.

The active teenager also heard that the college campus life at Duke was very vibrant and exciting.

Another reason for choosing Duke was that Durham is not far from home.

Because no Florida schools participate in the QuestBridge program, Perez had to choose an out-of-state school.

For Perez, being a doctor has been the plan ever since she could remember.

In middle school and high school, she took health science classes and is a member of the school’s Health Occupation Students of America, or HOSA, which is a national organization that promotes career opportunities in the healthcare industry. 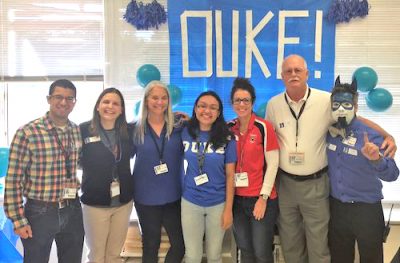 That was a repeat of last year when she also placed first in the regional competition.

Uptegraff and Perez will be going to the HOSA national competition, also in Orlando this year, later this month.

They presented a paper on Integrative Medicine Physicians in front of a panel of judges, as well as constructed a display board explaining how integrated medicine uses the least toxic method for a remedy.

Perez was thinking about pursuing integrative medicine as a career, but she also is leaning toward emergency medicine.

That was because she spent two summers volunteering at Manatee Memorial Hospital Emergency Room in Bradenton.

“That was the first time I ever stepped into an emergency room,” Perez said. “I got to see a little of everything.”

She interacted with the nurses, the doctors and the patients. 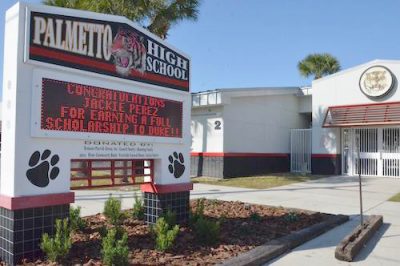 “I helped them with whatever they needed, including running errands or keeping patients company,” Perez said.

Along with the inspiration of her parents, Perez credits her teachers at Palmetto high for her scholarship award and getting into Duke.

“They take a big interest in all their students,” she said.

“Obviously Jackie’s an outstanding student,” Auckerman said. “But it takes a community effort to turn out students like Jackie.

“It really takes a village – parents, teachers and staff,” he said.

Auckerman said countless hours of help are necessary to ensure a student’s success, something teachers do daily and often do not get recognized.

“And look what the hard work gets us – students like Jackie,” he said. 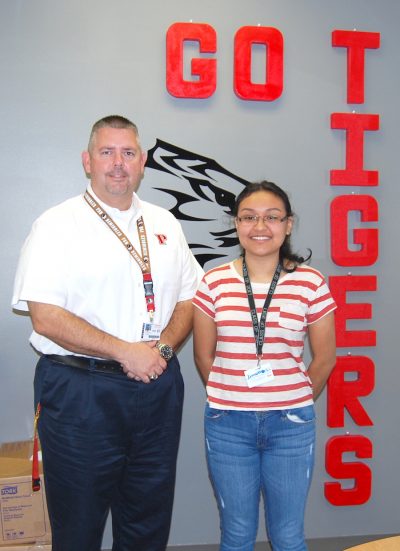 The goal is to provide an educational environment that allows students to go as far as they can, Auckerman said.

Along with the academics, schools need to provide other activities, such as sports, ROTC, and special-interest clubs, he said.

“The reward is increased graduation rates, and with students like Jackie it’s good to be a Tiger,” Auckerman said, referencing the school mascot.

Perez has lived in Palmetto all her life with her parents and brother, Jordan, 14, and attended Palmetto Elementary School, Lincoln Middle School and now Palmetto High School.

Attaining good grades was easy for Perez, except for math in middle school, she said.

“But with a little hard work and persistence I got it,” Perez said with confidence not always seen in 18-year-olds.

Over the summer she traveled alone to Northwestern University in Illinois for a QuestBridge conference where students receive advice on the application process and coaching on how to complete the forms.

Perez said she also will be going alone to visit the Duke campus in a few weeks.

“Jackie is proving that it is possible to achieve your dreams, said Superintendent Greene. “We look forward to following her future successes.”

For more information on Palmetto High School go to www.edline.net/pages/sdmcpalmettohs