Lamplighters to the rescue

Lamplighters – Finding a need and filling it 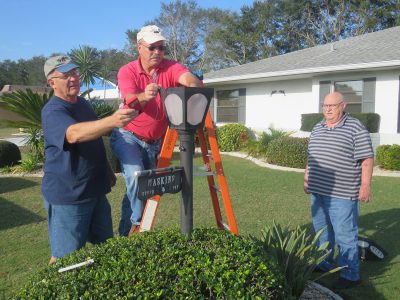 BILL HODGES PHOTO
Steve Haskins, right, looks on while Carl Rowoldt and Barnett Alpert replace the bulb in his lawn light. The informal group of Lamplighters is finding high demand in the early days of their new venture of helping homeowners keep their lights shining. This was their third of four jobs that day.

No, they aren’t lighting and extinguishing gas lights as “Lamplighters” did in the early days, but some mechanically inclined citizens in Sun City Center have found a way to make their community safer and brighter. These dozen or so Lamplighters epitomize the “neighbors helping neighbors” value that is ingrained into the SCC lifestyle.

Barnett Alpert, a member of the group, said the informal group was kicking around ideas about how they could use their know-how to help others. They decided on this project—replacing bulbs in the community’s lawn lights. They do emphasize that this help is for those who are unable to do it themselves due to health/financial issues or lack of know-how.

Bob Miller, a Lamplighter who is coordinating the calls, said that they want homeowners to be clear about the scope of their venture. If they determine the problem to be more than just the bulb, they will offer guidance about whether a handyman or electrician should be contacted.  Moreover, they certainly will not be scouting the area for darkened lights and start replacing them. A request must be initiated by the homeowner.

Street lights are a rare sight in residential areas of Sun City Center; the lawn pole lights were installed by various developers over the past 56 years. That means that emergency first responders (fire, sheriff, etc.) must depend on homeowners to ensure that house numbers can be read easily from the street so as not to slow down critical response time.

Steve Haskins, one of the first homeowners to call, was delighted to learn about the project. It has been bothering him for a few months that his light was out, but his ladder-climbing days are over due to a vertigo condition. He has no family nearby. “I am from a little Tennessee town where we were raised to be self-sufficient. Even minor home repairs are hard as we get older, and a lot of us don’t want to bother our neighbors and friends for this kind of thing,” Haskins said.