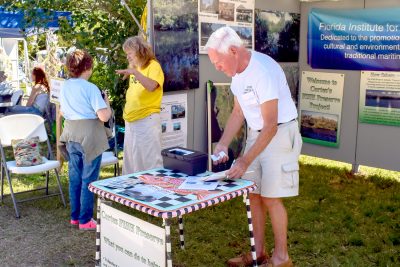 The Florida Institute for Saltwater Heritage, or FISH, had a booth to promote the organization at the annual Commercial Fishing Festival.

This weekend Cortez held its annual Commercial Fishing Festival, an event that filled the small village with seafood, live music and cultural history. The festival was held both Saturday and Sunday, although the wind, rain and cold kept the crowd to a minimum on Saturday.

Sunday, however, the people were out in full force as both residents and visitors flooded Cortez to partake in everything fish-related. The Florida Institute for Saltwater Heritage —abbreviated FISH — put on the event as a way both to raise money and to help promote the area’s unique history and continued ability to thrive as a small fishing village.

They aim to promote and preserve the area’s commercial fishing industry and to protect the history of other maritime populations. As part of their mission, the organization is operating the Folk School near the Maritime Museum where they hope to teach skills traditionally used by seafaring families. 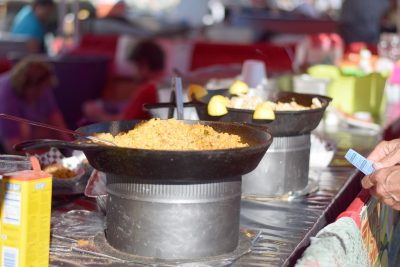 The FISH group also owns and is in the process of restoring a 100-acre preserve of natural land once used for everyday fishing by the native people who lived in the area. Last century, the land had been sold for development; however, no development ever occurred, and, before FISH stepped in, the land had fallen into decline due to corporate pollution.

Alongside the work that FISH currently engages in, the Cortez Classic Yacht Guild is attempting to move and restore an Italian schooner from the 1870s. The guild is currently raising money via Gofundme to help revive the 70-foot long ship.