Somewhere over the Rainbow Bridge

Somewhere over the Rainbow Bridge 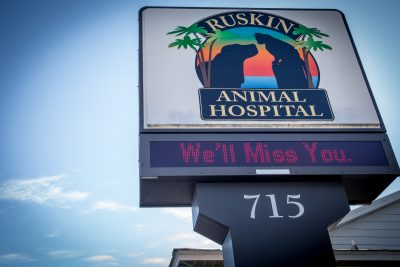 At the Ruskin Animal Hospital, the sign read, “Dr. Slaughter Rest In Peace. We’ll Miss You.”

I don’t know if there is a Rainbow Bridge, but I choose to believe there is. And with that, I can envision that Dr. John Slaughter, DVM, recently retired from Ruskin Animal Hospital, is being greeted happily by more dogs and cats than could possibly be counted. I have nothing but hope and faith that the little boy who grew up with a deep love for all animals is now basking in the love that they are returning to him. He helped them.

And the truth is, for those of us who love our pets, he helped us, too — often in ways beyond description. His words could be a source of relief or a source of grief — but there was never any doubt those words came straight from his heart. He had compassion, and he had empathy. When in grief, I’m certain he felt the sadness that we did.

I also hope he says “Hi” to Sammy and Sadie for me. Not that he’ll have a choice. I’m certain that Sammy will march right up to the front of the line, and Dr. Slaughter will scratch Sammy’s head, just where he likes it. Sammy will give him a kiss and then he’ll squeal his oh-so happy dog squeal.

Sadie will kiss him, too. A lot. And she’ll wag her tail so hard that the entire back half of her body will be wiggling.

Dr. Slaughter passed away early this month. Those of us, both biped and quadruped, who have had the privilege to meet him, will miss him dearly. Those who have gone on before, certainly my Sadie and Sammy, will be so very happy to see him at the Rainbow Bridge. For anyone who has loved an animal, it is the place where all is healed and where dreams come true.

Sammy was a 4-year-old boy dressed up in a white, furry, 105-pound dog suit. In other words, he was a big dog with a big-dog bark but was, more often than not, a frightened little boy when in unfamiliar surroundings. Which was pretty much anywhere but his home with his dog bed and couch — and that certainly included going to see the vets at Ruskin Animal Hospital. He would try to be brave but would turn inward, and even hugs around his big neck would only slightly comfort him. 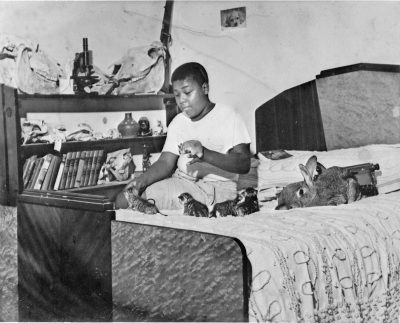 Dr. John Slaughter, DVM, as a child already displaying his love for animals. Dr. Slaughter, recently retired as a veterinarian at Ruskin Animal Hospital, passed away unexpectedly earlier this month.

Dr. Slaughter knew that, too. He knew that Sammy would be scared. He also knew that it would be extremely uncomfortable for him to get lifted up onto the examination table. Sammy didn’t like to be examined at all, and especially not on an examination table. So Dr. Slaughter would do what was best for Sammy — he got down on the floor with him so he could gently examine him there. He would only do what the dogs were comfortable with.

He broke the news that Sadie had cancer. He guided us through it, finally letting us know that it was time to give her whatever she wanted — be it steak or the pudding cups she loved so much. He told us that we would know when the time was best for her.

The problem was that Sadie and I were rarely apart; even when I traveled, I would talk to her. I couldn’t imagine my life without her, but my selfish hopes meant much less than allowing her to suffer. Every night she would curl up by my legs, and as the cancer progressed, I would stroke her fur as it became more difficult for her to breathe. Finally, I knew what Dr. Slaughter was telling us. That was a difficult time, but he helped us — all of us — through it.

A few years later, when the child-like light began fading from Sammy’s eyes, and his old body could no longer respond, we would go down that same road with him. Dr. Slaughter listened, he gave advice; but mostly, he was kind, patient, understanding and compassionate. He knew Sammy well. And he knew our pain, too.

My debt of gratitude to him could never be repaid.

But I hope Sadie and Sammy are getting started on it. Seeing him, Dr. John Slaughter, DVM, at the Rainbow Bridge, Sadie’s tail is wiggling her entire body. Sammy is yelping for joy in ways that I used to hear when I came home, but haven’t for the past year now, almost to this very day.

I’m glad Dr. Slaughter is hearing it. It is the sound of a very happy dog. His family, his friends and his patients — both biped and quadruped — miss him here. But somewhere else, somewhere over the Rainbow Bridge, he is being welcomed with love deeper than we can possibly imagine — in ways he probably dreamed about as that child who so very much loved animals.

Godspeed, Dr. Slaughter. Thank you for taking care of all of us.