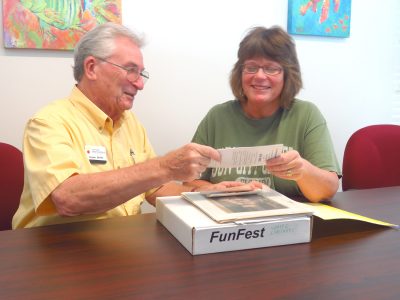 BILL HODGES PHOTO
Chairing FunFest is a new volunteer endeavor for Brigitt Lewis, who is fairly new to Sun City Center. Here she gets some pointers from Howie Griffin who chaired the popular community event last year.

With the burgeoning growth of the South Shore area, no doubt there are many newcomers who may not be aware of the upcoming Sun City Center FunFest on Saturday, March 18, 9 a.m. to 2 p.m.

FunFest is one of the area’s largest spring celebrations—and it is free and open to the public.  Last year’s event attracted thousands from SCC and surrounding areas.

FunFest is sponsored by the SCC Community Association, with all activities taking place on its Central Campus, 1009 N. Pebble Beach Boulevard. The festivities begin at 9 a.m. at the bandstand with the American Legion’s flag raising and a welcome from Brigitt Lewis who is chairing the event.

This is the 18th consecutive year that the CA has sponsored FunFest to showcase its members’ active lifestyle and their participation in its 160+ clubs as well as SCC civic and service organizations.

Plans for FunFest include continuous entertainment in several venues around the property that includes popular area entertainers such as The Dukes, Kevin Brooks and Elvis (aka Bill Lindsay).  The clubs will be offering food and items created by their members, and all club rooms will be open for browsing and gathering information about the groups. Area businesses and civic organizations will also be on hand to provide information about their products and services.

The very first FunFest in 2000 was the brainchild of then club liaison Walt Cawein. He thought it would be a good way for the clubs to raise funds and to tell others about their activities. “As I recall, the weather was beautiful, and we were overwhelmed with the huge turnout,” he said when reminiscing about those early days. No doubt subsequent years were easier in that organizers knew more about what to expect. Commercial vendors were not invited to that first event. Now, they are an integral part of the day and help “pay the bills” for permits, security, rented chairs/tents, etc.

FunFest Chair Brigett Lewis is a fairly new Sun City Center resident; she moved here in 2015 from Missouri. “I am delighted that most of the 17 committee members are seasoned in their roles and came back to help this year.  Members who had to step down for some reason have been more than willing to offer guidance,” she said. Volunteerism is an important part of the active senior lifestyle this community’s residents enjoy. Lewis views this project as another way for her to contribute.

Howie Griffin, who chaired FunFest 2016, sends kudos Lewis’ way for stepping forward. “When I agreed to chair FunFest last year, I had no idea of the complexity in organizing the large event. The monumental effort of these volunteers to make it memorable for the community needs to be applauded. Folks from other parts of the country often plan their vacation time in order to be here. In fact, my RV camper club of 12 units from Minnesota have been coming down for the past six years, and they will be coming again this year.”

Watch future SCC Observer News for more details about participants, entertainment schedules, parking, map, etc., especially the March 16 edition, which will include a section that you can take to FunFest with you.  For FunFest information, call the CA office at 813-633-3500.