Gedeon stays at The Language House 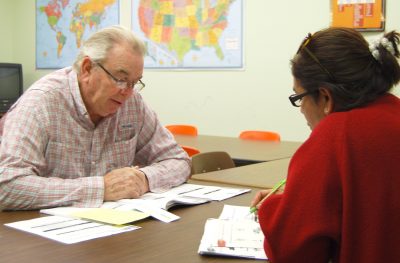 CARL MARIO NUDI PHOTOS
Alan Gedeon helps Maria Hernandez with her lesson during an English class at The Language House.

One of the first projects Alan Gedeon worked on when he started with the Manatee County Neighborhood Services Department as an AmeriCorps VISTA volunteer in 2007 was helping the Samoset residents to develop a plan for community improvements.

“One of the programs Samoset residents wanted was an English for Spanish-speakers class,” Gedeon said.

So since he knew how to speak Spanish, Gedeon started teaching English in 2008 and called the program The Language House.

Gedeon, 73, had learned Spanish because his wife Silvia was from Peru, and he “wanted to know what she was saying about me in Spanish to her family.” They have been married 17 years.

As a Palmetto resident, Gedeon was asked to work with Palmetto Library Supervisor Yoshira Castro, helping her develop an outreach program for the Hispanic community.

“Yoshira already had Spanish programs at the library, but with county support I began to help with testing English proficiency levels and finding volunteers,” he said.

Because Castro was born in Puerto Rico, she said her job was to reach out to the Hispanic community.

“I can identify with the problems some people have with learning English because I had to struggle,” she said. 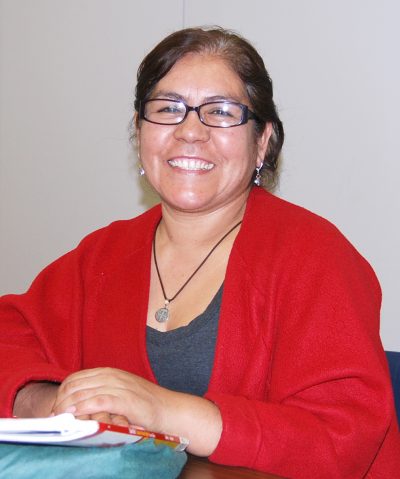 Maria Hernandez, who has been taking English classes at The Language House for about four years, said it has helped her in her job and in the community.

“I came from Puerto Rico and spoke mostly Spanish,” Castro said. “I got involved with a lot of different organizations, such as Toastmasters, and because I had to give presentations I became more confident.”

With Gedeon’s experience with The Language House in Samoset, they decided to start English classes at the Palmetto Library.

“The merger was good fit for The Language House and the Palmetto Library programs,” Gedeon said.

But because the library activity room was needed for other community organizations, they were not always able to offer classes on a consistent basis.

“At first we had a problem finding a permanent place to hold the classes,” Castro said.

Over the years, The Language House classes were taught at the Central Library in downtown Bradenton, and various other locations throughout the county.

Then one of the volunteer instructors suggested Holy Cross Catholic Church, 505 26th St. W., in Palmetto.

The church has a building with several classrooms it uses mostly on Sundays, and about half of the parishioners are Hispanic, so Gedeon approached Holy Cross’ leadership.

“They were agreeable, and now we can focus on teaching,” he said.

The road to establishing The Language House was not necessary a direct route.

Gedeon joined the Army after a year in college, because he did not think college was for him. 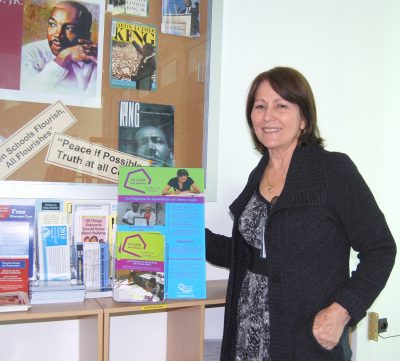 He served four years active duty and was discharged in 1968.

After working in a factory in his hometown, Cleveland, he realized he needed a college education to advance.

So Gedeon went back to college and got a bachelor’s degree in history.

When he graduated he got a job with Atlantic Richfield Company, later to become ARCO, in the human resources department, then in company relations and moved around the country.

“I even worked in Alaska,” Gedeon said.

But in 1985, oil prices started to drop and ARCO started downsizing and offered enhanced retirement plans for anyone over 45, but the catch was you would not receive benefits until 55, so Gedeon had to continue to work.

“I started working construction in Wisconsin, but being born and raised in Cleveland, Ohio, I wanted to get back to my home state,” he said.

Gedeon got a job with an Ohio company that made point-of-sale displays and traveled the country installing them.

He moved to Florida as production manager in Tampa for that company, but then  the company closed, so Gedeon got a job with Forest Lumber in Sarasota.

At 55 he took the ARCO money and started to volunteer with Habitat for Humanity.

But he moved to the AmeriCorps VISTA program in 2007 because it offered a medical plan, and he was assigned to the county neighborhood services department.

When Gedeon’s VISTA contract was up in 2009, the county hired him.

Now at 73, Gedeon is really retired. His last day with Manatee County was Friday, Feb. 3.

But he will continue to volunteer as a teacher with The Language House.

Over the years, more than 80 students have used the services of The Language House, and about 50 volunteers have helped out.

The only cost to the student is for the textbook and workbook, about $30, and Gedeon helps students find a way to pay for them.

“I’ll ask for a dollar a week if they can’t afford the whole cost,” he said. “Besides, when there’s a monetary cost, there’s a greater incentive to learn.”

With his background in the building industry, Gedeon uses a construction analogy with his students on how they will learn English. 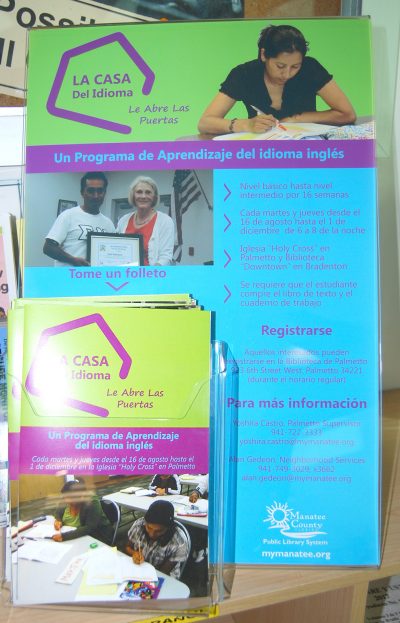 A poster and brochures explaining the benefits of The Language House are available in the Palmetto Library lobby.

“I tell them you start with a foundation of bricks, which are like words. Then you string the bricks together just as you would sting words together to make sentences. And you end up with open doors and windows to great opportunities,” he said.

Castro said the English classes are needed for the Hispanic community to be successful.

“I think knowing English is very important,” she said. “You need to know English, or you will not have access to the opportunities that are available.”

Maria Hernandez, a student at The Language House, agreed.

She said she always recommends the classes to her friends.

Recently The Language House has expanded its program.

A local community activist in Samoset, Taura Denis, started to get her neighbors organized again after the enthusiasm had lagged over the years, Gedeon said.

Denis asked Debbie Deleon, a coordinator in the county neighborhood services department, about English classes, and Deleon knew whom to call to help in getting them started.

Gedeon started classes in Samoset about five weeks ago with four students.

“It’s like we’ve come full circle,” Gedeon said. “The Language House started in Samoset nine years ago, and here we are back there again.”

But Gedeon emphasized none of the success would have happened if it was not for all the help he received.

There are two volunteer instructors to help Gedeon, Joanne DeSimone at Holy Cross and Sandra Garrison at the Central Library in downtown Bradenton, teaching about 15 students at the three locations, he said.

Classes meet at the Holy Cross Catholic Church, 505 26th St. W., in Palmetto, from 6 to 8 p.m. every Tuesday and Thursday, and the Central Library, 1301 Barcarrota Blvd., Bradenton, on Monday.