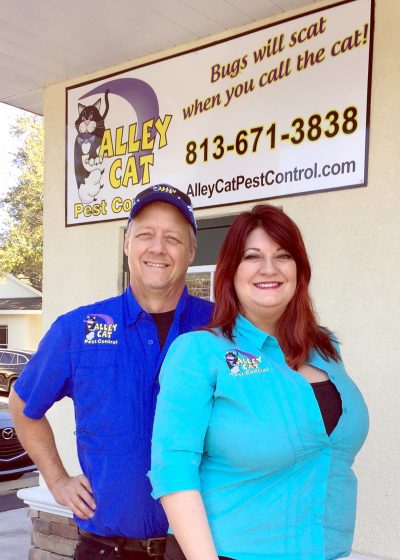 LOIS KINDLE PHOTO
Cliff and Lisa Kennedy are celebrating the 10-year anniversary of Alley Cat Pest Control with a multi-chamber ribbon-cutting at their office at 9420 Balm Riverview Road on Feb. 9.

On Feb. 7, 2007, Cliff and Lisa Kennedy opened a full-service pest control company on U.S. 301 in Riverview. It was located inside Bob’s Bug Blasters, which was owned and operated by Cliff’s father, who sold do-it-yourself pest extermination products.

“It was my dad who got us into the business,” Cliff said, adding Bob had been at it for decades and still is. “Over the years, he was ‘in and out’ of the service part of pest control, because people he knew kept ‘dragging him back.’”

After Cliff and Lisa married in September 2001, Lisa went to work with Bob as his office administrator. It wasn’t long after that Cliff followed and began handling pest control service requests for his dad.

That’s how the seeds of Alley Cat Pest Control were planted.

Lisa became certified by the state as a pest control operator, and Bob quit handling outside service calls. That enabled the Kennedys to start their own business.

“We named the company after our cat Alley,” said Lisa, who came to them as a stray and was adopted as part of their family and now includes three dogs, three cats and four turtles.

“We made our logo in her likeness, because we wanted something associated with us that we could brand, something family-friendly and something people would relate to,” she said, noting that cats were the “original form of pest control,” going back thousands of years.

Alley Cat Pest Control has come a long way since 2007.

“When we started, we had only 150 customers, which wasn’t enough to support both of us,” Lisa said. “For three years Cliff ran the day-to-day operations, I got a full-time job as an office manager and helped him whenever I could.”

“We lost our safety net but looked at the job loss as a blessing in disguise,” she said. “I began going door to door promoting our business and began attending every free networking group I could find.”

“At the time, I told her failure wasn’t an option for us, that this was an opportunity for us,” said Cliff, who grew up in Riverview and graduated from East Bay High School. “We decided we weren’t going to participate in the recession.”

Their tenacity paid off.

Today the company is approaching 1,500 customer accounts, and the Kennedys have two full-time technicians, Allan Dodsworth and Casey Gray, on the road. They also employ Margaret Stewart and Jill Schank in the office. 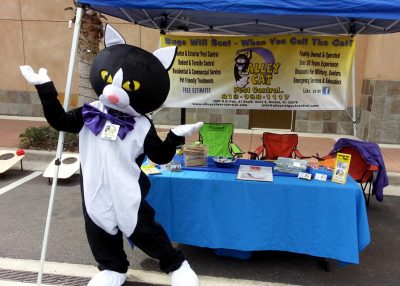 The couple has supported Honor Flight of West Central Florida, Mended Little Hearts, Faces of Courage, the South Shore and Riverview Relay for Life events and the Critter Adoption and Rescue Effort no-kill animal shelter. Both are members of the FishHawk Riverview Rotary.

Alley Cat Pest Control provides a full array of commercial and residential services for any size building, including pest management for bedbugs, cockroaches, spiders, subterranean termites, ants and rodents. No contracts are required.

“We may not be the cheapest pest control company out there, but we’re going to take care of you and stand behind our work,” Cliff said. “Our customers are our friends and neighbors.”

In 2015, the Kennedys moved their business to obtain additional space to the old Sam Cook building on U.S. 41 in Ruskin. Then, last April, they came back to Riverview and opened new quarters at 9420 Balm Riverview Road in the same plaza as Four Paws Veterinary Hospital.

LISA KENNEDY PHOTO
Alley Cat Pest Control was named after a stray cat owners Cliff and Lisa Kennedy, both ardent animal lovers, adopted and took home to be part of their family.

Alley Cat Pest Control is a member of all three South Shore chambers of commerce: Greater Riverview, SouthShore and Sun City Center. Members of those chambers will take part in a special ribbon-cutting ceremony at the Alley Cat office Feb. 9 at 5:30 p.m., and the Kennedys will host an open house from 5 to 7 p.m. to celebrate the company’s 10-year anniversary.