In South Hillsborough, ancients and pioneers, but few pirates 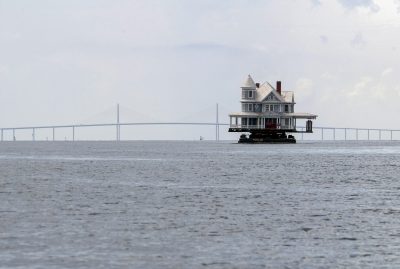 Ruskin has a rich and deep history and holds four of Hillsborough County’s sites on the National Register of Historic Places. One of which, as shown above, arrived only a decade ago. Contrary to the weekend’s festivities in Tampa, South Hillsborough’s history is less about pirates and more about a place to call home.
MITCH TRAPHAGEN PHOTOS

Hillsborough County is 1,266 square miles in size with more than 1.3 million residents. Within that large area are 94 sites listed on the National Register of Historic Places. Ruskin makes up a small portion of both size and population. Yet Ruskin is home to four of the county’s historic places.

History is fluid in the Sunshine State. It is home to the nation’s oldest city, but most of the state’s modern history is measured in a single century. Unlike states further north, there are few reminders of the three Revolutionary War skirmishes that took place here. The growing population of Florida is a fairly recent trend by historical standards.

Yet people have been here for millennia. Florida is an ancient land, and one of the Ruskin historical sites reflects that.

As they do every year, pirates invaded the city of Tampa during Gasparilla this past weekend. And during the golden era of piracy in the 1700s, certainly more than a few pirates sailed into Tampa Bay. There is little indication, however, that they stopped at Bahia Beach or attempted to sail into Cockroach Bay. Aside from being difficult in well-laden ships with the varying shallow waters, the welcoming party they could have encountered may not have been so welcoming.

Or, perhaps more likely, by then they would have found no one at all.

Ruskin may well have once been the capitol of the people of Uzita, with a territory running from the Little Manatee River all the way to Sarasota Bay. Explorer Hernando de Soto encountered them in 1539, describing a town, likely near Cockroach Bay, consisting of what was described as a chief’s house, less than a dozen other homes and what may have been a temple. The structures were made of wood and palm thatches. Historical records suggest that they weren’t the welcoming sort, and possibly practiced rituals of human sacrifice, with one early explorer reporting that his fate would have been upon a grill had the chief’s daughter not intervened on his behalf. 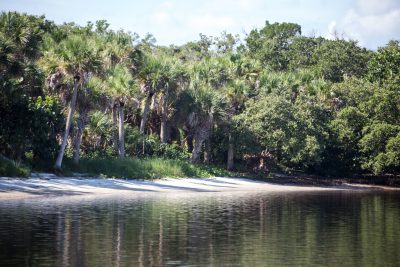 Five centuries ago, what is now Ruskin may well have been the capitol of the Uzita people. Cockroach Key, one of many islands (as above) off the Little Manatee River was Ruskin’s first designated national historic site.

By 1739, however, the Uzita and their successors appeared to be gone, according to the book, Indians of Central and South Florida: 1513-1763 by Florida historian John H. Hann. Their history is marked by the shell mounds they built, most gone today through development but a significant one remaining on one of the many islands off Cockroach Bay.

To see the islands up close would generally require getting wet. 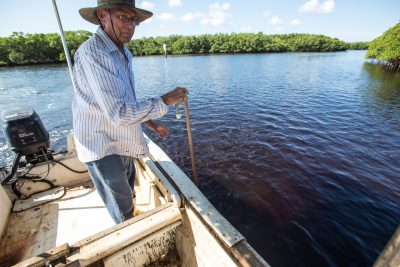 Ruskin naturalist Gus Muench along the ancient Uzita Trail, following the islands off the Little Manatee River and Cockroach Bay. Five centuries ago, it was part of the Uzita territory that stretched down to Sarasota Bay.

Ruskin naturalist Gus Muench knows the Uzita waters like the back of his hand. He was featured in a 2013 Observer News article about his hopes of creating an environmentally-friendly 12-mile-long waterborne path along the islands that he called the Uzita Trail. Much of which, according to Muench, could actually be traced on foot for those willing to wade, thanks to hard sand.

Of the many islands on that trail, Cockroach Key, among the most ancient of places in the area, was the first in South Hillsborough to be designated a National Historic site on Dec. 4, 1973.

The history of South Hillsborough is somewhat erratic in leaping centuries. Ruskin was founded in the early 1900s as what was effectively a commune. A college was constructed, and people worked, were educated, and were even entertained as a collective, or rather, as a Commongood Society. The next two of Ruskin’s historic sites are related to those founding days, when the Alafia River, yet to be bridged, effectively kept the area isolated from the growing city of Tampa. 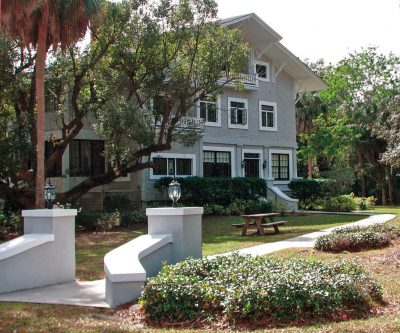 The George M. Miller House, today known as the Ruskin Woman’s Club, is located on U.S. Highway 41. It was built in 1914 to be the residence for the president of Ruskin College.

The home was Ruskin’s second historic site. It was added to the National Register of Historic Places on July 23, 1974.

From the same era is the A.P. Dickman House, located just off the Ruskin Inlet on Dickman Drive. In an article by Dr. Mac Miller (a descendent of the community founders) available at ruskinhistory.org, he describes it as, “Built entirely out of heart pine, the house was the first finished wood structure in South Hillsborough County.”

Dr. Miller further added, “The A. P. Dickman House is the finest eclectic dwelling in the county.”

The home, Ruskin’s third site, was added to the National Register of Historic Places on July 14, 2000.

Given the fluid nature of history in Florida, it should come as no surprise that Ruskin’s fourth historic site was not part of the history of Ruskin at all; and, in fact, didn’t even arrive in the community until Sept. 26, 2006. Appropriately given the centuries of history of the relationship between the water and the people here, that site arrived by barge.

The A.M. Lamb House, a large Victorian mansion, was built in Palmetto in 1910 by a Mississippi banker named Asa Lamb. By 2006, it appeared to be headed for demolition to make way for development. An agreement was reached with Manatee County to preserve the home and it was moved, in entirety, aboard a barge down the Manatee River, under the Sunshine Skyway, across Tampa Bay and into the Little Manatee River to Ruskin, where it sits today.

Photos from that enormous undertaking made news around the world. 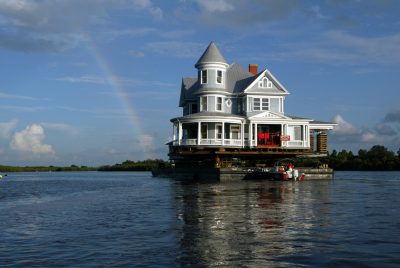 The A.M. Lamb Home, Ruskin’s fourth national historic site, was not a part of the community’s history. Appropriately, however, it arrived by water on Sept. 26, 2006.

The home was added to the National Register of Historic Places on Oct. 12, 2007.

The history of South Hillsborough is much more extensive than can be shown through four designated sites. One of the world’s most significant historical discoveries was made by Ruskin paleontologist Frank Garcia in July, 1983, at the Leisey Shell Pit, located near the Little Manatee River. Garcia’s discovery yielded what many consider to be the world’s largest known collection of ice-age fossils, with “history” meaning more than  1.5 million years in the past.

The history of South Hillsborough is both rich and deep. But, contrary to the festivities of Gasparilla just up the road, it is less the story of cannon fire and marauding pirates and more one of a place where people, both ancient and modern, have chosen to call home.