SouthShore Chamber of Commerce awards best of the best

Two-hundred-and-ten SouthShore Chamber members and guests turned out for a night of dining, fellowship and awards at the chamber’s annual membership banquet Jan. 27 at Southshore Falls. 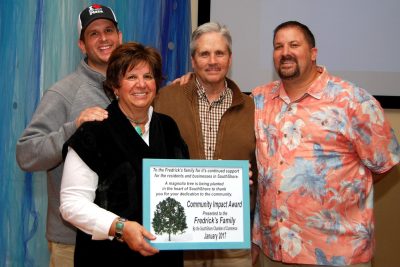 LOIS KINDLE PHOTOS
The SouthShore Chamber of Commerce presented a new award this year called the Community Impact Award to the Fredricks family for its personal and professional commitment, dedication and service to South Shore and its residents. From left are Aaron, owner of East Coast Pizza; parents Karen and Richard, and Jason, co-owner of Legal Shred and Red Bags. Missing from the photo is brother Sean, co-owner of both companies. Karen is president of NAMI Hillsborough, board member AMIkids and the Southshore Coalition on Mental Health & Aging and an active member Kiwanis of SouthShore.

“This event gives us the opportunity to reflect on 2016, look forward to what we have in store for 2017 and acknowledge the efforts of some of our most involved members,” said Executive Director Melanie Rimes. “The chamber is in a really good place right now. Our businesses are successful, and we’re finding the secret to that success is offering them the opportunity to give something back to the community residents who support them.

“When we do that, everyone thrives.”

• the Business Champion Award (to recognize the person who consistently offers tangible support to other chamber members and insight and ideas for growing businesses and attracting new ones);

• the Lead by Example Award (to recognize someone who, through their own actions, demonstrates to others the value of community involvement and service to others);

• the Shirley May & Bruce Scheller Commitment to Military Award (for the person exhibiting exceptional and continuous support for the military and its members;

• the Community Impact Award (to recognize someone who is committed both personally and professionally to serving South Shore and its residents;

• and the Alvarez & Madden Community Outreach Person of the Year.

Recipients were glowing after being named.

“I’m quite in awe of the award and about having a tree planted in our honor,” said Karen Fredricks. The family was truly overwhelmed. We are all so committed to being involved in the community and bringing about positive change.”

“I was shocked and surprised to say the least,” said John Smith, noting that getting to work with so many other community volunteers is a joy and privilege. “To be the first to receive an award that acknowledges two great people I looked up to is a wonderful thing.”

Following a tribute to outgoing President Joey Henderson by Rimes, Hillsborough County Commissioner Sandy Murman came up to the podium to give him a special commendation signed by each of her fellow commissioners in recognition of his outstanding dedication and leadership during 2016.

The event also included the passing of the chamber board’s leadership gavel from Henderson, of the Florida Home Partnership, to incoming President Deb Adams, of BMO Harris Bank. In their remarks, Henderson thanked the chamber board for its support throughout 2016, and Adams expressed her excitement about working with the board in the coming year.

“The banquet was a great way to kick off the year,” Rimes said. “Our chamber members are doing great things in the community, and I can’t wait to see what 2017 brings.” 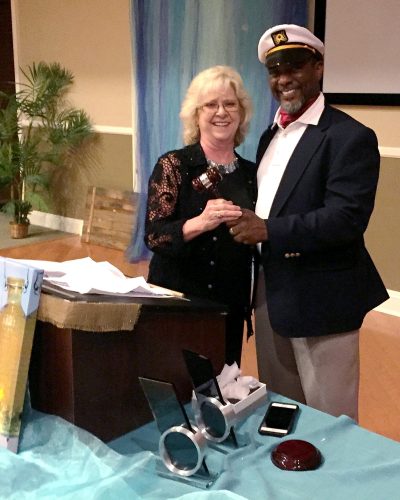 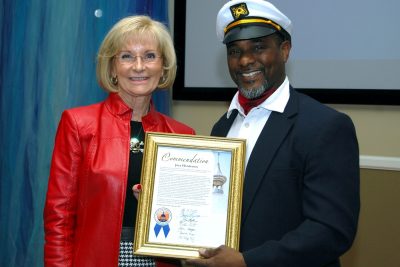 Hillsborough County Commissioner Sandy Murman, Dist. 1, presents a special commendation signed by all of her fellow commissioners to outgoing SouthShore Chamber President Joey Henderson for his outstanding dedication and leadership during 2016. The plaque was given Jan. 27 at the chamber’s annual awards banquet at Southshore Falls. 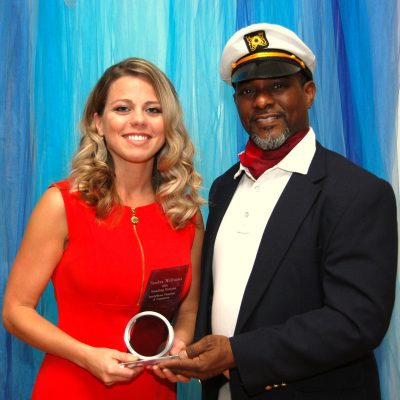 Sandra Williams, of Sir Speedy, poses for a photo with Joey Henderson, outgoing chamber president, after accepting the 2016 Standing Ovation Award, formerly known as the Ambassador of the Year Award. 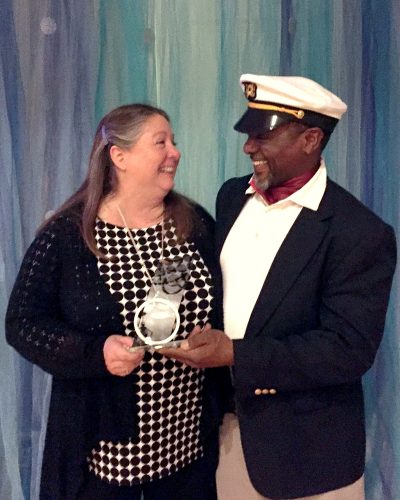 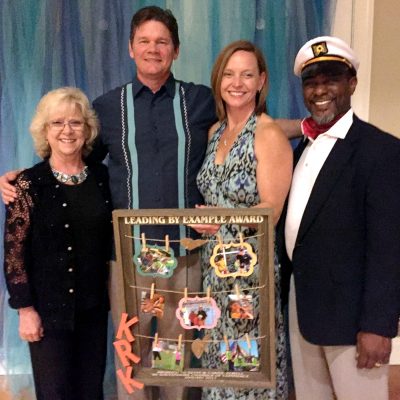 Deb Adams, incoming chamber president, left, and Joey Henderson, outgoing president, surround Kevin and Carrie Elwell, owners of Kids R Kids Southshore, after the couple was named recipient of the new Lead by Example Award, for their constant commitment to demonstrating the importance of community service and involvement to thousands of area children. 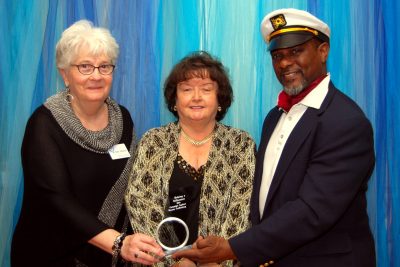 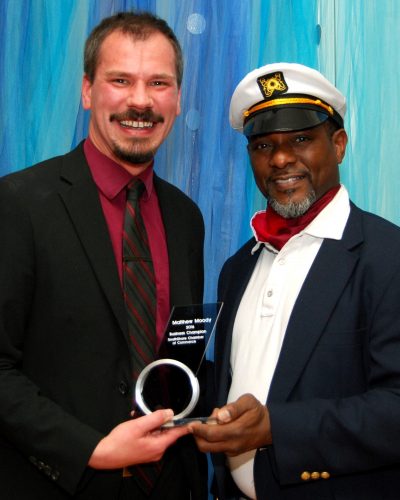 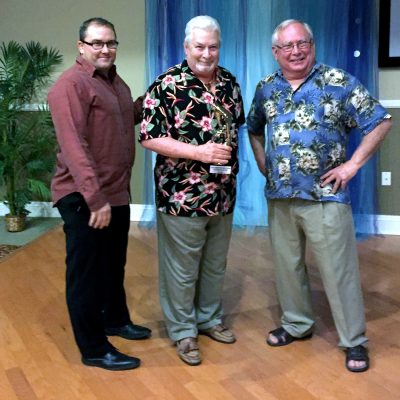 After being named the recipient of the new Alvarez & Madden Community Outreach Award, John Smith, co-owner of three H&R Block offices in South Shore, is photographed with Steve Alvarez and Dave Madden, son and husband, respectively, of longtime community supporters Jose Alvarez and Anne Madden. Both died in 2015. 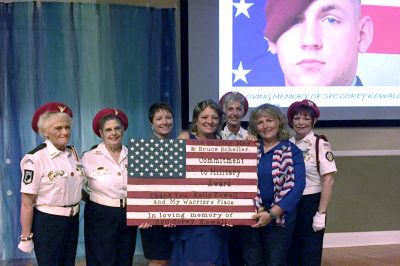 Kelly Kowall, of My Warrior’s Place, with microphone, thanks the SouthShore Chamber of Commerce for giving her the inaugural Shirley May & Bruce Scheller Commitment to Military Award at the chamber’s Annual Membership & Awards Banquet Jan. 27 at Southshore Falls. May’s daughters Marci Martinez and Lori Yeago presented the award. At left are members of the Ruskin VFW Women’s Auxiliary, Beverly Singleton, Shirley Turner, Beth Brooke and Pam Zilba. 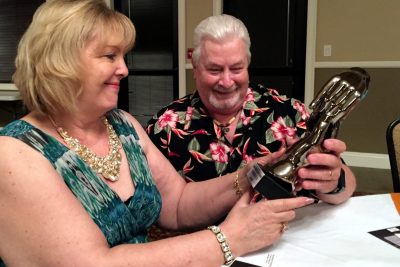 John Smith and his wife, Penny, of H&R Block, take a close look at the Alvarez & Madden Community Outreach Person of the Year Award, which Smith received at the SouthShore Chamber’s Annual Membership & Awards Banquet Jan. 27. 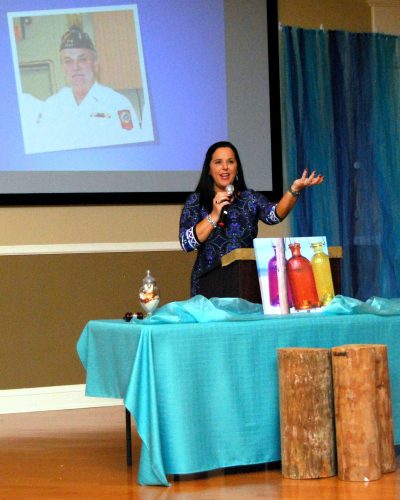 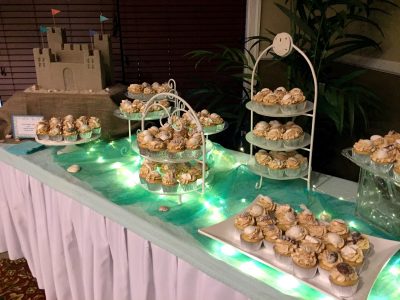 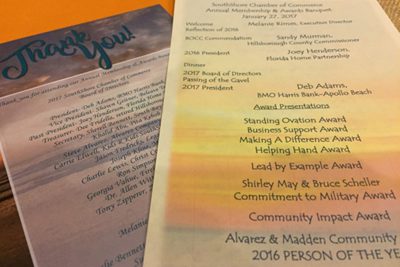 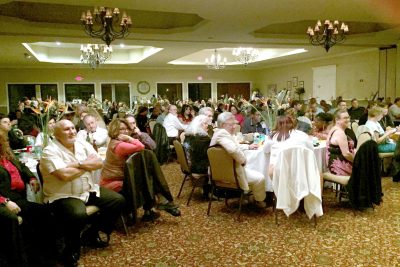 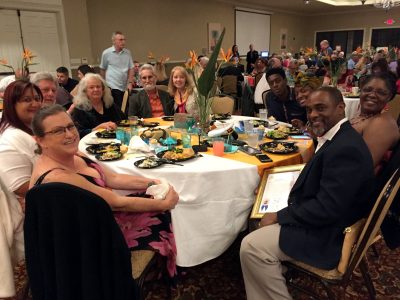 Joey Henderson celebrates his final evening as SouthShore Chamber president with his family and members of the Florida Home Partnership Board.