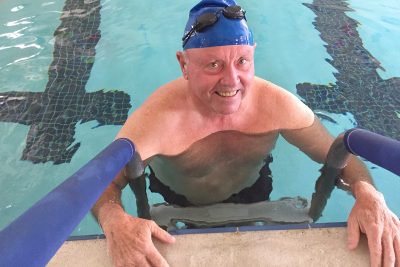 Every cent he collects goes to a special fund with Diabetes Youth Services, an independent nonprofit organization based in Toledo, Ohio.

Smith, 67, will celebrate his 68th birthday in the Sun City Center Community Association’s regulation-size lap pool by swimming 300 lengths (more than 4 miles) to meet this year’s goal of raising $30,000. As of Jan. 31, he had collected $20,305, and you can help him hit his target.

“I swim for DYS because it’s the right thing to do,” he said. “It’s become such a passion.

“I’ll keep doing this as long as DYS continues not to deny a child camp because of its parents’ financial situation. Every dollar I raise helps them do that. My wife and I cover all administrative costs.”

Smith said he’s had a lot of support since he began the annual campaign.

“Over the years, I’ve received donations from residents in 28 states and two countries,” he continued. “Seventy-five percent of those donations are under $100. They’ve been as little as $3 to as much as $2,000. Every dollar counts.”

The youngest of eight children, Smith began swimming at age 5. Although it was taught as a survival skill, he took to the water like a fish.

But his time in the pool went on hiatus when he graduated high school, went on to earn an undergraduate degree in social work from Defiance College in Defiance, Ohio and then served in the Army until 1973.

While studying for his master’s degree in mental health counseling at Heidelberg University in Tiffin, Ohio, Smith hit the water again.

“I started swimming regularly for fun and exercise to relieve stress,” he said. “I’ve kept track, and since then I’ve swum 4,000 miles.”

While waiting to swim at a YMCA in Defiance, Ohio, in the fall of 2003, Smith saw a flyer promoting the Diabetes Youth Services Swim for Diabetes program. It was soliciting swimmers to help raise money for children with Type 1 diabetes, previously known as juvenile diabetes. It can be a life-threatening disease, if not properly managed.

“That flyer changed my life,” he said. 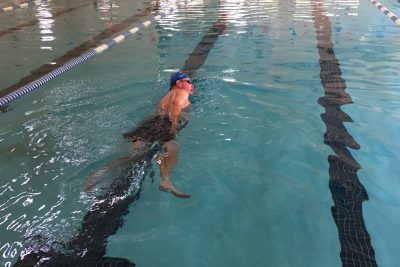 LOIS KINDLE PHOTO
Since 2004, Don Smith and his wife, Connie, have raised $203,995 to help kids with insulin-dependent diabetes go to summer swimming camp, where they learn to give themselves shots, test themselves and manage the disease.

He began swimming for the program the following February. At the time, his daily personal regimen included doing 70 lengths a day. But a bet made by one of his doctors led Smith to up his routine to 100.

Smith and his wife, Connie, were subsequently invited to attend a DYS awards night at the organization’s Little Shots Day Camp for youngsters with diabetes. The kids, all ages 5 to 10, were recognized for learning to give themselves insulin shots, test themselves and manage their disease.

The Smiths, who never had children, were deeply moved.

“A child with Type 1 diabetes who had also raised the most money asked me if I would have a picture taken with her,” Smith said. “On the drive home, my wife and I decided to get involved.”

The Smiths will collect tax-deductible donations through February. If you’d like to help, mail your check, made payable to Diabetes Youth Services, to Donald J. Smith, P. O. Box 6158, Sun City Center, FL 33571-6158.

You can also visit www.dys4kids.org. Diabetes Youth Services is a registered nonprofit organization with the state (CH50118). It has served children with insulin-dependent diabetes and their families since 1984.