…women pioneered in what were considered men’s jobs?

I certainly remember it.

While freelancing to women’s magazines in the late 1960s all through the ’70s, before I could support my three young children with a full-time writing job, it didn’t matter that I was the office manager at a motel or the manager of a small store. In both lines of work, I ended up making the coffee for men who worked for me; being told by district supervisors I had to wear skirts or a dress (no slacks) and at one position, even that I had to wear high heels.

Worse yet, twice I trained men who later came back as my boss, and in both fields, I was passed over for a higher position with the company — once by a man I had trained.

The district manager at the motel chain told me “It would be too complicated for me to find someone to take care of my children while I went for five days of training in another state,” and the convenience store division manager said I couldn’t become a regional store supervisor because “I wouldn’t stay at my job as long as a man would, so there was no sense in moving me up any farther than local management.”

This is why I give a very special kudos to Karen Gasser Johnson of Sun City Center.

Johnson was the first woman to work alongside men in the plant now called Mosaic Fertilizer.

When Johnson was hired back in the 1960s, the plant — which was, and is, inland from its offices in Gibsonton — was called U.S. Phosphoric, and the only women who worked there were cafeteria workers or secretaries.

Johnson had majored in research and development of inorganic chemistry and was hired as a chemist.

Having grown up in Elyria, Ohio, Johnson moved to Tampa when her husband, who had an accounting degree, was put in charge of procurement for items that pilots going to Vietnam required.

While he was stationed at MacDill Air Force Base, they rented a garage apartment and later bought a house in Tampa where they lived 32 years before moving to Sun City Center in 2003.

“Coming from up North where the plants were in buildings, I was shocked to find most of the plant’s work area was outdoors,” she said. “The tankers would come in from Texas with molten sulfur to be mixed with the calcium phosphate in the shells (of the prehistoric sea animals) that were scraped up from the earth to make the fertilizer.”

She explained that there are layers and layers of clam, oyster and other shells under the ground here that make calcium phosphate, an ingredient the plant workers would grind to the consistency of flour and treat so it would be soluble to plants and used as fertilizer.

“We would have to keep exact data on everything at all times from the wind speed to the readings of the discharge from the stacks in case the company was accused of ruining a crop,” she said.

When asked how she was treated by the men it didn’t take her long to tell too many stories to fit in this column. But basically, what follows is a good example.

“I and some women who were hired after me, did some really, really dangerous jobs. They made their own DC current — electricity — and we would sometimes be told to go up on a roof, walk across a catwalk, and then we had to jump over a 2-foot space to reach the place where we could dump the fertilizer. We all knew if you touched the sides at certain points, you could be electrocuted.”

Supposedly many of the men thought it funny to see women do these things, “But I did them,” she said. “I did everything that was required of me.” 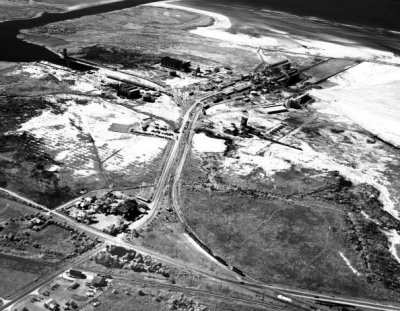 There were no outside women’s restrooms at the plant; only when they were inside where the secretaries were, so Johnson used the men’s rooms when working at the plant.

She still remembers the date of her hire: July 5, 1966; and that she worked 6 years in the plant, until she had the first of her three children.

“We decided that I’d be a stay-at-home mom,” Johnson said.

She told me so much more than that: All about what lies beneath our earth here in the Tampa Bay area and about the gypsum stacks and phosphoric lights that sometimes illumine the Alafia River. But this column isn’t about the phosphate industry and how it affects our lives. It’s about a pioneer with the guts and brains to break into what had been strictly a man’s world until that time.

Good job, Karen. Today’s women all owe you a debt of thanks.