Imagine your dismay if you call the Sun City Center Emergency Squad and are told, “Sorry, we can’t respond because an ambulance isn’t available.” 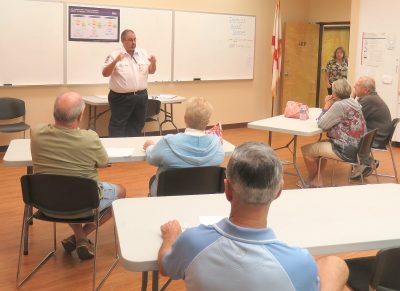 The dispatcher was forced to give that message to about five residents a day in the last three months of 2016. Those needing help were then faced with a gut-wrenching decision: Call 9-1-1? Call a private ambulance service? Wait for an available squad ambulance?

Why can’t the squad respond to all calls? After all, they have over 400 volunteers, four ambulances and two wheelchair vans. The answer, quite simply, is that some of those vehicles cannot be put into service because of limited manpower. The volunteer count has been steadily decreasing, and they can now staff only two ambulances during the day and one overnight. The squad also has two wheelchair vans for medical-related assistance but currently has only one in service because of the volunteer shortage.

Let’s take a closer look at the squad’s call numbers for 2016. Last year the squad responded to 4,851 calls requiring an ambulance and made 1,359 wheelchair van runs. Emergency calls — 4,851; wheelchair van runs — 1,359. Interesting fact: Falls routinely account for just over one-third of the calls — during some months, it climbs higher.

“The folks we lose are often due to aging out. If you can no longer do CPR, you can no longer be on the ambulance or van. Many leave for family health issues or move to be closer to their kids,” said Assistant Chief Robin Watt. “While the average age that someone joins us is 67, we have volunteers younger and older. The average length of stay for our retirees is about five years. Our younger volunteers move on to paying jobs usually within a year. Our youngest volunteer is almost 20, and our two oldest volunteers are 93.”

Chief Robert Leonard is a 50-year old Ruskin resident. He echoed Watt’s comments. “We don’t like to say, ‘Sorry, we don’t have an ambulance available.’ For every call we can’t respond to, that resident faces a lot more aggravation and expense. People here recognize that the squad is a valuable community service and are generous about helping with operating costs. In fact, we just received the Nonprofit of the Year award from the sun City Center Chamber of Commerce. But money isn’t helping us get volunteers; that’s our biggest challenge, and it is growing more serious every day.”

It is important to note that there are no residential requirements; volunteers can live anywhere. Anyone interested should explore the opportunities with no preconceived notions about what they can or cannot do. Joe Michaliszyn, for example, wanted to volunteer but had physical limitations. “When I learned about dispatching and scheduling, I thought, ‘I can do that.’ Since I have been working with the squad, I feel part of an extended family and have a sense of well-being from helping people,” he said.  There are other roles to play in addition to those mentioned, e.g., mechanics, vehicle maintenance, etc.

To check out volunteer opportunities or just to learn more about the squad, call 813-633-1411 or stop by 720 Ray Watson Drive any day between 8 a.m. and 5 p.m. They will give you a cup of coffee, a tour and information about this dedicated group of Neighbors Helping Neighbors (the squad’s motto).