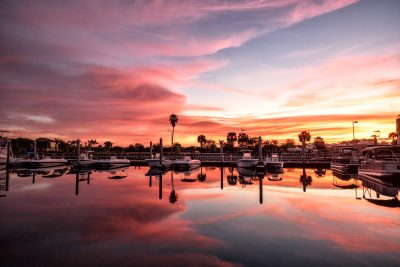 “Red sky in the morning, sailors take warning.” Storms and the weather in Florida are often a matter of perspective…and where you happen to be at any given moment. In this case, a red sunrise as seen from Little Harbor in Ruskin, provided a few days warning.

Perspective on weather in Florida (and in the tropics) largely depends upon exactly where you are at any given moment. It is the only place I know in which you often need to wear sunglasses while your windshield wipers are on. It could well be that a few streets over it’s raining, yet isn’t where you are.

Personally, the biggest distinction to me is being in a house or on the water. Except for serious stuff like hurricanes, living in an inland home means that the weather doesn’t often have a lot of impact. It might be nice; it might be breezy; it might be raining but it’s just another day in paradise.

On the water, however, weather can be significantly more ominous. Especially when your home is only secured by a few ropes to a dock. 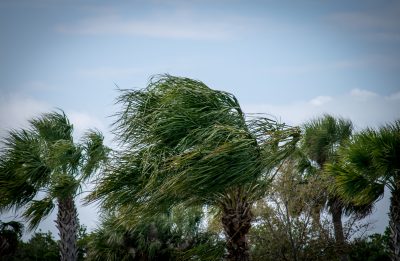 For those who dream of life in paradise, palm trees are always near the center of those dreams. But they are also a visual reminder of heavy weather.

It is Sunday. It is 80 degrees with sunshine; a beautiful day in paradise in most respects. But on the water, with less stuff to block the wind, it felt as though the apocalypse were approaching, made all the worse by the weather forecast. I did what I could to secure everything left outside, but even so, when heavier gusts hit, the boat heels over and there is the invariable, inexplicable crash on deck.

And the storm is still forecast as hours away. Sunday winds are just the result of the tightening pressure gradients before the worst of it. Somewhere in town, people probably had no idea, nor much concern for it.

From the National Weather Service Office, Ruskin on Jan. 22 (caps theirs):

Oddly enough, the only thing that isn’t worrisome in that are the waterspouts. I’ve seen waterspouts at sea, and they appear terrifying, but as long as you aren’t heading into one, they really don’t do much. 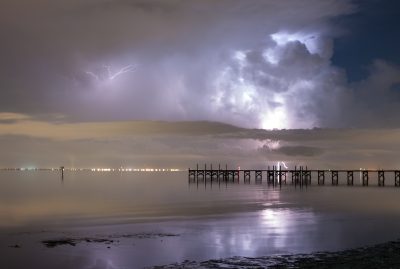 Sure it’s paradise…but storms are not to be taken lightly. All you can do is prepare and then, “Don’t worry.”

Years ago, we were sailing in the open Atlantic towards the Turks and Caicos Islands. We were set up with weather information from a wonderful man named Herb Hilgenberg. Sailors would check in with Herb using an SSB (long range) radio and he would estimate your progress and provide detailed, localized weather forecasts. Dozens of boats underway would check in with Herb each day. As we made our way towards the Turk and Caicos, storms were building heavily to the south of us. A few minutes before it came my time to check in with Herb, my wife and I saw three — count ’em — three waterspouts a few miles off our starboard side.

Herb was the voice of calm and sanity in that conversation, as is his nature. When he told us the weather for the remainder of our sail into Providenciales (Provo to you sailors out there) would be fair, I’m pretty sure I screamed back into the radio’s microphone, “HERB! THERE ARE WATERSPOUTS OUT HERE!”

“Don’t worry,” he replied in the most serene, rational manner possible, considering he was speaking to a grown man screaming like a little girl.

Nothing seemed to ruffle Herb. Well, nothing except when people were in trouble, Or when they decided against listening to him, thereby sailing into rough weather and afterwards hoping he could somehow reach through the radio waves to save them from the ocean waves. Then he could get a tad curt. But he was still always polite and always did what he could to to help.

That happened to us once, much later on our cruise; and his reply was again serene with an almost imperceptible level of irritation: “I told you not to go,” he said. And then he kindly told us what to expect and how to minimize the worst of it.

Regarding the waterspouts and storm, Herb was right. They stayed to the south. The weather was fine. But it was still scary for a while. We were on the ocean in a little boat, and the nearest land at that time was…straight down.

Herb, a man who had been known to occasionally even respond to large airliners crossing the Atlantic in heavy weather, earned his angelic wings on more occasions than anyone could count. And he certainly did on that day for us. After 25 years of helping those of us on and over the ocean, usually completely free of charge, Herb retired in 2013, and his call sign, Southbound II, has gone silent. 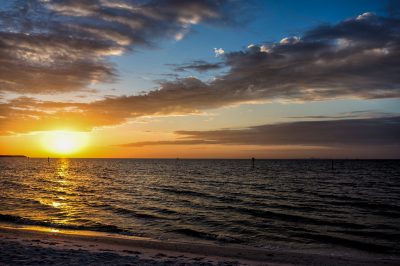 After the storms pass, tomorrow is almost always a better day.

And now today I am listening to a robot voice on the VHF radio talking of some nasty things that are expected to come, frequently interrupted by a computerized emergency signal.

It is dark outside. The wind is blowing hard, but as I stick my head out of the hatch, I can see someone’s driveway a mere 200 yards away. The boat is still here, the dock is still there. Things could be worse.

It is Monday. The wind is howling, but the sky is blue. Until it isn’t…a squall moves in quickly, things get dark, some rain pours down, and then…the sky is blue again. As Captain Ron, from the 1989 movie, would say, “They come on you fast, and they leave you fast.”

The bimini, which provides shade for the cockpit of the boat, is lost. Only flapping tatters remain. Some roads flooded in the Tampa Bay area, and lots of people have branches to pick up in their yards.

But the real impact and tragedy was felt just to the north where, as of Monday, 19 people had lost their lives, and many more were injured as the storm blew through the Southeast.

Storms in paradise depend much on where you are: A little too far to the south, and you get waterspouts; too far north, and you get tornadoes. And sometimes you need sunglasses while driving in the rain. In the end, while being prepared for the worst, Herb’s advice seems best: “Don’t worry.”

As it usually is, tomorrow will be a better day.