Jan. 13 was a big night for the Sun City Center area business community when its 450-member chamber hosted the 2017 Installation of Directors and Awards Banquet at Club Renaissance. 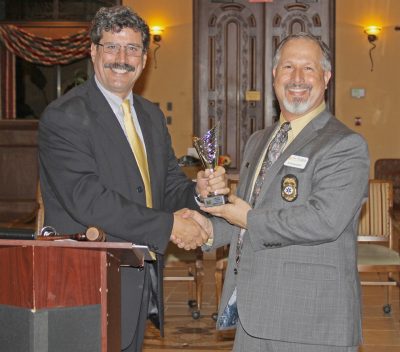 REGINA DEXTER PHOTO
The Rev. Bill Cruz, of the Good Samaritan Mission, left, congratulates Robert Leonard, chief of the Sun City Center Emergency Squad, as he accepts the SCC Area Chamber of Commerce’s 2016 Nonprofit of the Year Award on behalf of the Squad.

The sixth annual event drew 120 members and guests, who came to learn who had won one of the chamber’s six annual awards and welcome its 2017 leadership group.

“Our board is purposely comprised of highly motivated directors who represent all aspects of the community,” said Fran Fabbro, board chairwoman. “We’re so excited about the year ahead.

“This year’s theme is ‘building bigger, growing stronger for our future,’ and our primary goal is to strengthen the relationship between our residents and the business community.”

Outgoing Chairman Cedrick Wilson thanked retiring board directors Michael Wills, of Morgan Stanley; Chuck Bingham, of Lifestyles After 50; Mike Langjahr, of Sun City Center Funeral Home; and Rick Lanese, of Lanese + Associates, for their service throughout 2016 and swore in new board members Jeanne Burkeson, of Square One Inspections; Robert Leonard, of the Sun City Center Emergency Squad; and Matthew Moody, of Little Harbor. (Eric Allen, of EA Fitness, was out of town and not present.)

Wilson also swore in the rest of the board and the chamber’s 2017 officers: Fabbro; Chairwoman-elect Connie Huber, of Mark Rossmiller State Farm; Vice Chairman Kevin Kerbow; Treasurer Marcille Buzbee, of MLB Services; and Steve Scuiga, of A+ Heating and Air.

Fabbro provided an update on the chamber’s upcoming expansion project, which will involve a complete remodeling of its banquet room: A fresh coat of paint, new flooring, new lighting and the construction of three new offices in place of previous storage space. 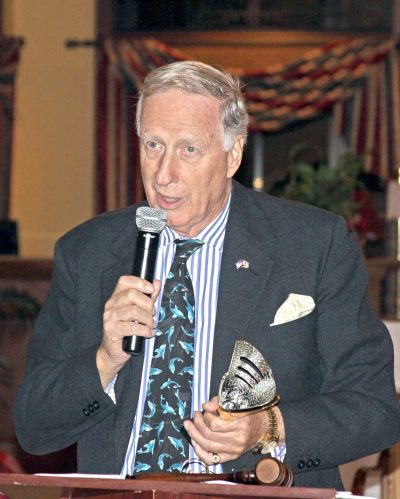 “The goal is to increase non-dues revenues and provide a much-needed update to a facility built in the 1980s,” said chamber CEO Dana Dittmar. “After an 18-month renovation of my own home, I’m looking forward to this one, which will take only 45 days or less.”

A construction loan for the project, which will cost between $60,000 and $80,000, was secured through Cadence Bank.

“Any monies we have previously collected (for the project) will help round out the balance and any going forward will help pay the loan back,” Dittmar said.

One of the night’s highlights, of course, was the awards presentation.

The gala was emceed by Tony Del Castillo, of the Tampa Bay Times.

“I thought it was one of the best ever,” said chamber CEO Dana Dittmar, about the event. “It was well-organized, everything went smoothly and the food was excellent. Club Renaissance’s new management team did a phenomenal job. 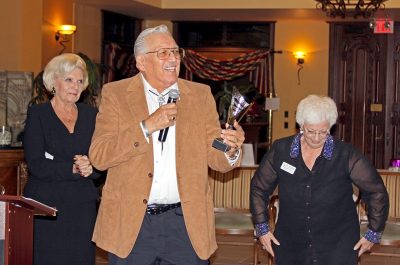 Retiree Larry Brigant thanks the SCC Area Chamber of Commerce for naming him the 2106 Frank King Volunteer of the Year. At left is Frank King’s widow Mary, and at right, Margaret DeLuca, the 2015 award winner. 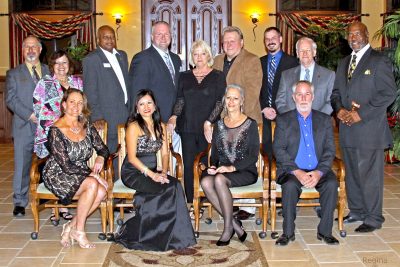 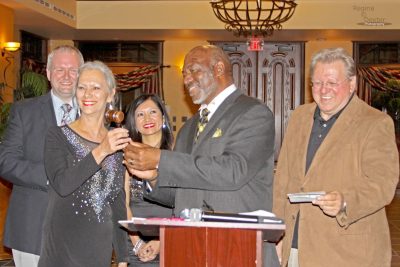 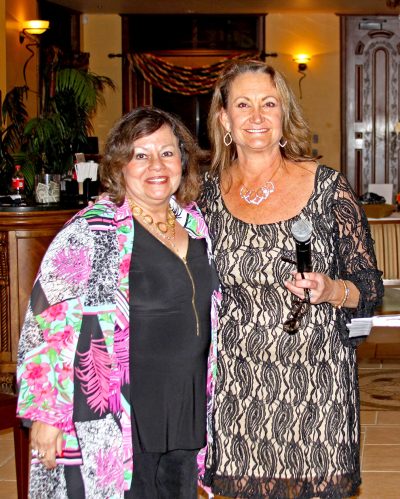 REGINA DEXTER PHOTOS
The 2016 Ambassador of the Year, Jeanne Burkeson, poses with the 2015 winner Marcille Buzbee at Club Renaissance during the Sun City Center Area Chamber’s 2017 Installation of Directors and Awards Banquet Jan. 13.

Big band tea dance is back