An Evening with Nicholas Sparks

‘An Evening with Nicholas Sparks’ 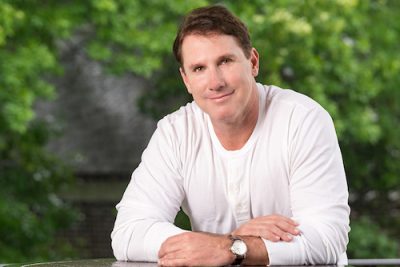 BRAD STYRON PHOTOGRAPHY
Nicholas Sparks will tell stories about his 20-year career as a writer and answer questions from the audience at the Manatee Library Foundation fundraiser, “An Evening with Nicholas Sparks” on Feb. 7.

Following the great success of the last two fundraising events, the Manatee Library Foundation will hold another called “An Evening with Nicholas Sparks.”

Sparks, author of such best-selling novels as The Notebook and Time in a Bottle, will tell stories about his 20-year career as a writer, and answer questions from the audience.

Former Manatee County Commissioner Larry Bustle and his wife Edie, will co-chair the event to be held at 7 p.m., Feb. 7, at the Neel Performing Arts Center, on the campus of the State College of Florida, 5840 26th St. W., Bradenton. 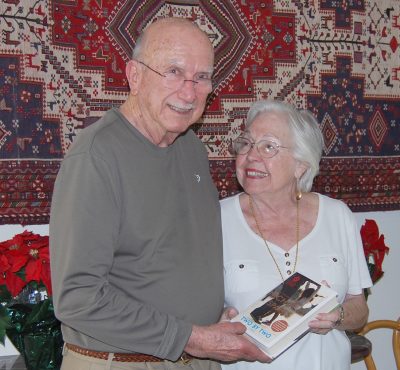 “We’re excited about being co-chairs of this event,” said Edie, who just retired from the Manatee County Library Board of Trustees after serving for 16 years.

“The Bustles have been outstanding champions for the Manatee County Library system and the Library Foundation for a very long time,” said Susan Wilcox in a quote in a press release. “Their willingness to take on this project is just another example of their exceptional commitment to improving literacy rates in our community.”

Wilcox is organizing the Sparks event for the foundation.

Edie said this was an important fund-raising event because the proceeds will go to the library’s “I Am a Lifelong Learner” program. 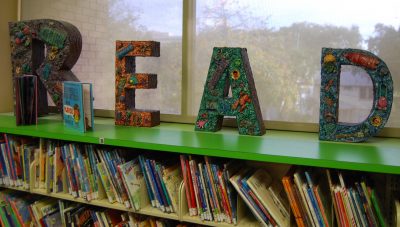 Giant sculpted letters encouraging children to READ sit on a window seat in the Children’s Area of the Manatee County Central Library in downtown Bradenton.

“The literacy level in our elementary schools is low, and this money will go toward ways to raise the literacy rate,” Edie said.

According to Florida Department of Education 2016 statistics, more than 50 percent of third-grade students in Manatee County read below their grade level.

“Edie and I were talking about why the children can’t read, and we think a lot of it is the difference in family life today compared to when we were growing up,” said Larry.

“The kids are influenced by TV, cell phones, computer games, and sometimes English isn’t spoken in the home,” he said.

Ava Ehde, the Manatee County Library System services manager, said the “I Am a Lifelong Learner” campaign was an outreach program to help inform families how to work with their children to become better readers and lifelong learners.

“We want to get them excited about reading,” Ehde said. 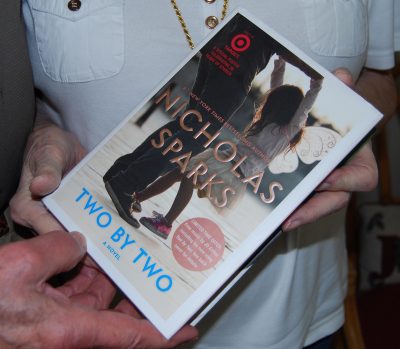 Pre-signed copies of Nicholas Sparks’ latest novel, Two By Two, will be available for sale at the Manatee Library Foundation fundraiser, “An Evening with Nicholas Sparks.”

Ehde said Williams’ outreach includes working with children up to the age of 5 years old to improve their reading skills.

She also meets with the parents and provides them with materials and kits for them to use to get more involved with helping their children become lifelong learners, Ehde said.

“We let the parents know there are other resources and organizations available to support them,” she said. “This program takes us out of the traditional library walls.”

Since it was established 29 years ago, the Manatee Library Foundation has raised funds for several projects for the Manatee County Library system, including the monies for the Lifelong Learners program and $100,000 for upgrading the library system’s computerized card catalog.

According to Sparks’ website, all of his books have been on the New York Times Best Sellers’ list.

One of his best-known works, The Notebook, published in 1996, was adapted into an award-winning movie, as were 10 other novels Sparks wrote.

“There’s the emotion of a family breaking up and the positive feeling of a new family forming,” she said. “Nicholas Sparks handles it well with his great writing skills.”

The Bustles have been active in the community since Larry returned to his native Manatee County in 1984 after 27 years as an officer in the United States Air Force.

Larry represented District 1 of the Manatee County Commission from 2008 until he decided not to run for the office again in this last election.

Prior to serving on the county commission, he was mayor of Palmetto for six years.

The Bustles will be married 60 years this November.

“We met at a dance at the Naval Yard in Philadelphia,” said Edie.

Larry was attending the Naval Academy in Annapolis and was in Philadelphia, Edie’s hometown, for training, she said.

They eventually became engaged, but when Larry, who was training in Sebring, was not given leave to get married, Edie came to Florida, and they were married on Thanksgiving Day, 1957, in Somerset.

Edie traveled with her husband to all of the posts he was stationed, except for Vietnam.

“I was in the first class to graduate from the University of Pennsylvania’s nursing program,” Edie said, “And wherever we were stationed I always was able to get a job with my bachelor’s degree in nursing.”

Larry Bustle was commander of an Air Force base in Turkey and Edie made contacts with Turkish rug suppliers there.

After they retired and returned home to Palmetto, Edie started a rug import and selling business, which she ran for nearly 11 years.

To ensure the Sparks’ event is a success, the Manatee Library Foundation offered sponsorship packages from $500 to $10,000.

All sponsors are invited to pre-event receptions and those at the Silver Level of $2,500 and above can attend a special VIP party attended by Sparks.

Reserved seating tickets are $150 and general admission tickets are $100. Tickets can be purchased online at www.manateelibraryfoundation.org, or by calling 941-216-8746.

To help celebrate Valentine’s Day, a special deal of two general admission tickets for $100 will be offered until Jan. 27.