The circus came to town

In Gibsonton: The show did go on…

Photo gallery at end of article. 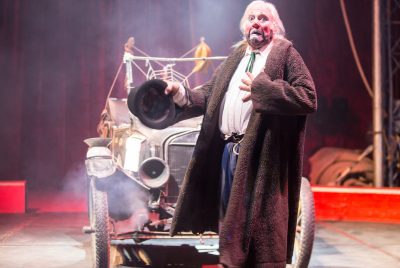 Saturday morning started under gray and rainy skies with a temperature of 71 at 8 a.m. By 1 p.m., the first of three showtimes for the annual Gibsonton Charity Circus, it had fallen to a chilly 58 degrees. But that didn’t stop the crowd from showing up. It certainly didn’t stop the performers from showing up. After more than 30 years of performances to raise money for local and national charities, this circus did go on … and was among the best ever held.

In a world that is becoming increasingly virtual by the day, there is almost nothing that you can’t find, almost nothing you can’t see, with a few clicks on your web browser. But it is easy to fake stuff on the web. What isn’t easy is hanging from a trapeze bar…just by using your bare heels. Oh, and doing it without a safety net. What isn’t easy is standing up on a huge galloping horse. What is even less easy is leaping up and doing a backflip from that same horse and landing on your feet. On the horse. What isn’t easy is riding a bicycle across a tightrope — again, without a net below.

And what is most amazing is seeing it all in person. The Gibsonton Circus provided that increasingly rare opportunity on Saturday in three sold-out shows. There were no special effects and the thrills were real time, playing out live before those lucky enough to have attended.

The performers, who have dedicated their very lives (and often risking them in the process) to their art and to their craft, all worked for free. And make no mistake: It was work. In addition, those who labored to raise the big top in less than ideal weather, the ringmaster, the circus band, the clowns, the concessionaires, the volunteers in the parking lot, all worked for free. As they have for the past 34 years, the members of the International Independent Showmen’s Association have given of themselves to raise money for others.

It was the first Gibsonton Circus in many years in which Chuck Schlarbaum, one of the world’s foremost circus band conductors, was not leading the band, thought to be one of the largest circus bands remaining in North America. Schlarbaum, once featured in The Observer News, passed away in June. Lee Stevens, in opening the shows on Saturday announced a tribute performances and the band played on in his memory. Schlarbaum was a conductor for more than half a century.

With vendors hawking cotton candy and glowing light sticks, with clowns, the ringmaster and the band maintaining the continuity between performances, it was, as it should be, the performers who stole the show. But all made up the show — none could be without the others.

And while there was no shortage of families with young children in the crowd, there was also a significant number of retirees, proving that children of all ages love a good circus. And the Gibsonton Circus is among the best — there are few circuses left today where ringside seats are literally ringside.

The circus, held each January, is the largest of the charitable events held each year by the IISA, although the organization works nearly continuously to raise money for local needs. The circus itself, is a long, ongoing project for those involved in planning it.

“It is a year-long effort,” Lee Stevens of the IISA confirmed during an interview a few years ago. “We have a committee of 24 people. We sit down and decide who needs what from the circus — maybe someone needs more this year than last year,” Stevens said. “We’ve had years with 15, 16, 17 charities. Most of them are in the area.”

During the same interview, Stevens added, “The people in Sun City Center … I always start the show asking them to raise their hands. They come here and feel like they are 10 years old again. They love the tents and the seats and the smells. They are so much fun to have here. It is wonderful.”

Which is how he opened the show again this year.

Scanning the crowd as performers enacted dazzling feats, the smiles on faces young and old proved Stevens to be right. Members of the media generally don’t applaud along with crowds for a variety of reasons: We are too busy taking notes or photographs, and there is the standard to maintain some sense of neutrality. But in seeing each performer in an amazing show on Saturday, I couldn’t help but to join the crowd in applause.

It’s what you do when you feel like you are 10 years old again.

For information on the International Independent Showmens Association visit their website at www.gibtownshowmensclub.com.