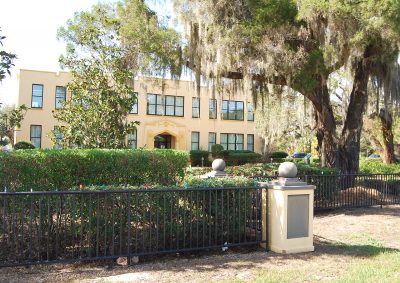 Manatee County renovated the historic Parrish School, built in 1924, in 2007 for $2 million and deeded it to the Parrish Foundation.
CARL MARIO NUDI PHOTOS

The historic Parrish School has housed a branch of Manatee YMCA since 2009, but population growth in this once rural ranch community has led to the local non-profit’s leadership to plan for expansion.

The Manatee YMCA recently purchased five acres across U.S. 301 from the schoolhouse location for $625,000 to build a future full-service facility.

“We’re busting at the seams,” said Stacey McKee, executive director of the Parrish YMCA branch. “Sometimes we have to run classes in the parking lot.”

Over the years many housing developments have sprung up throughout the Parrish area, creating a need for more family services.

“Young families are moving into the area,” said McKee, who has been at the Parrish YMCA for three years.

Because the building is not big enough or does not have the right facilities, many programs are held off-site, she said. 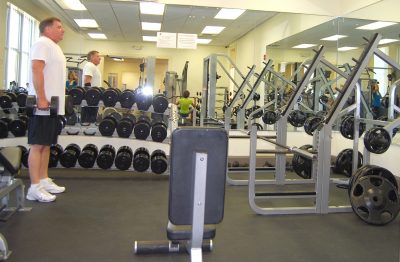 Several of the youth programs, such as summer camp and soccer are held at nearby churches.

“And during the summer we use the Cross Creek development community swimming pool,” McKee said.

The new facility, to be accessed from Rutland Road, will have two basketball gyms, an outdoor swimming pool, community rooms to hold meetings, exercise facilities, and classrooms for such things as yoga and art classes.

Staff at the Parrish Y will have to deal with a shortage of space at the schoolhouse at 12214 U.S. 301 N. for a few more years, McKee said.

“We’re about 6 months away from our capital campaign kickoff,” she said. “In the interim we’ll be building relationships with people who want to be involved.” 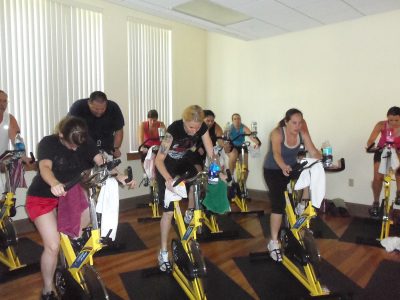 The new complex will cost between $6-8 million, according to a press release, but the director does not think they will have any problem raising the funds.

“We think people are very engaged in the community,” McKee said, “and as the heart of the community everyone wants to be involved with the expansion.”

Community activist Iris McClain, who was instrumental in having the Manatee YMCA expand into Parrish, agreed that the community would support the fundraising campaign.

McClain, a board member of the Parish Foundation, the Parrish Civic Association and the Parrish Arts Association, helped start a summer camp program in the old schoolhouse in 2001. 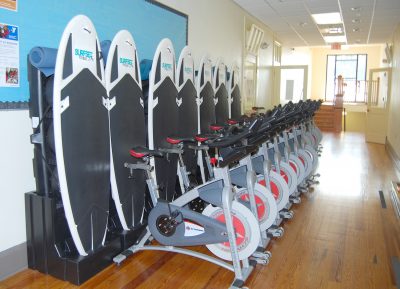 The Parrish YMCA Branch, which has outgrown the facilities at the Parrish School, stores exercise equipment in the halls between uses.

“The Parrish Civic Association saw a need for the young people of the area during the summer,” said the retired banker. “We got a lot of volunteers to help and took the children on field trips, provided swimming, and had classes for dancing and arts and crafts.”

The program was very successful, but the fifth generation Floridian said they could only provide summer camp for about 50 children.

“We really needed a program that could take more children,” said McClain, who moved to Parrish from Sarasota in 1973.

The leaders of the Parrish Civic Association talked to the YMCA and the non-profit took over the program in 2009 after Manatee County spent $2 million to renovate the Parrish School.

The summer camp now has more than 140 children each year, and the Parrish YMCA Branch has almost 3,500 members. 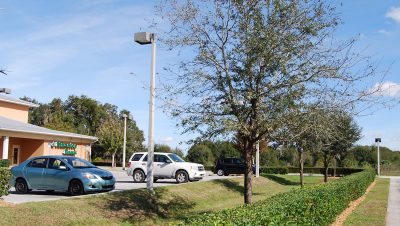 The Parrish YMCA Branch has plans to construct a new complex across the street from the current location in the Parrish School, 12214 U.S. 301 N., on five acres it purchased behind the Manatee Bank building.

“Having the YMCA is probably the best thing to happen to Parrish,” McClain said.

“We surveyed the members and they all wanted a front porch,” said McKee. “They have that now (at the Parrish School) with the wonderful patio out back providing an area for sitting and talking.”

Rothhaar said the YMCA would continue to be part of the Parrish community.

“The heart of the Y is the health and wellness of the community,” she said.

Providing exercise and sports activities are important functions of the YMCA, but the non-profit is organized to help people and give back to the community, Rothhaar said.

She pointed out several examples of the work the YMCA was doing to help in the community. 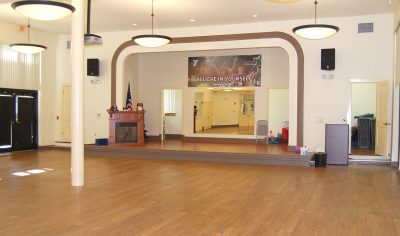 The Parrish YMCA Branch is housed in the Parrish School, which has a large auditorium with a stage. Manatee County renovated the historic building, built in 1924, in 2007 for $2 million and deeded it to the Parrish Foundation.

“We collected hundreds of bicycles at Christmas for children identified by the school district as being in need,” Rothhaar said.

They also have a diabetes prevention program and the Special Organized Adult Recreation program, or SOAR.

The program is all volunteer-run under the direction of the YMCA’s fitness director, Amy Skillman.

“Our work here is about caring about people,” Rothhaar said.

For more information about the Parrish YMCA Branch call 941-798-9622 or visit the website at www.manateeymca. 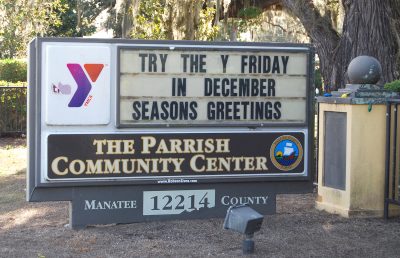 The Parrish YMCA Branch operates out of the Parrish School at 12214 U.S. 301 N. The non-profit will be holding a capital fund campaign to construct new facilities across the street.

Thunder By The Bay