Observations: The magic in Gibtown 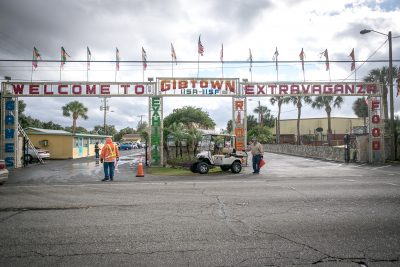 The International Independent Showmen’s Association in Gibsonton. Today, Gibtown is becoming more a suburb than show town, but many good show people remain. And I am grateful for that.
MITCH TRAPHAGEN PHOTO

I feel fortunate to have lived in this part of the Tampa Bay area before it was discovered. When I moved here, more than two decades ago, Gibsonton was known as Gibtown — and more, it was known as the winter home for Showmen. I had actually had the opportunity to go to the Giant’s Camp (now only a memory). I have to tell you: It was good. I enjoyed being there. I enjoyed the vibe.

Today Gibsonton is becoming more a suburb than show town. But it is still a very special place.

The 34th annual Gibsonton Charity Circus took place in three shows on Saturday. If you missed it, I’m sorry because it was fantastic, certainly one of the best I’d seen … and I’ve seen quite a few over the years.

When you are inside the big top, it’s easy to get lost in the magic of it all. It’s easy to see life through the eyes of a child. That is what they work toward, after all. But if you take a moment or two to look around as an adult, you become aware of just how much work goes into making that circus happen. No one gets paid — the money goes to charities, most of them right here in this area.

Just putting up that tent is an enormous engineering feat. And then there is the lighting (which was spectacular) and the sound system (ditto) and the various needs of the performers, everything from ropes to climb, to tightropes to walk, to a trapeze, to protective fencing for a big-cat show.

And then take a moment to see the performers through the eyes of an adult — you can’t help but see that they have dedicated their lives to their craft and for many of them, it must be incredibly tiring and physically demanding. Yet they put on three back-to-back shows, without asking for anything but the privilege of the applause from the audience. That is their entire life, it is how they make their living, many of them risk their lives, and they did all of that, all day long, only to help others.

It is extremely difficult to categorize or generalize about groups of people. Not all Lutherans or Baptists are the same. Not all guitarists or pianists are the same. Not all woodworkers or homemakers are the same. The same holds true for the group of people known as “Showmen.” That group includes men, women and children, often entire families and, while the wonderful woman who proof reads the paper may initially want to change it, for the duration of this column, I’ll keep the capital “S” in that group.

Of course not all Showmen are the same, but in getting to know them over more than a decade, having the privilege of calling a few of them my friends, I’d like to share with you some commonalities I’ve found in that group.

Some people think there is a bloodline involved in those who perform — and certainly many of them perform feats that are well beyond what most of us are capable of doing. But I think it’s more than that. I think it is also a cultural thing. They are simply good people. They are absolutely dedicated to their families; seemingly without exception, the children are bright, polite, conversational and extremely talented. They are also devoted to country. This country.

So just a few things: The charity circus is just one of the events they hold to raise money and help those in need. The members of the International Independent Showmen’s Association hold events throughout the year to help people. The Showmen are among the most generous people I’ve ever met.

By and large, Showmen are masters at reading people. Few, if any, people could pull something over on one. If it were critical to my job to learn some aspect of human behavior, I’d choose to hire a few Showmen over a team of demographers and social scientists with PhDs. They know people, they understand people. They can see the good and the bad. But you would never hear that from them. They do not judge publicly. Never. They have integrity.

They are also masters of promotion. They can promote anything, and make it sound like a miracle (and, they often aren’t far off the mark). But what they don’t promote — not at all — are the many good things they do for people in the community. They promote events, they do not go out to tell anyone, “Hey, look at the nice stuff we’re doing!” They have grace and they have humility.

They have empathy. I am aware of news reports of animal abuse in circuses. But I highly doubt you’d find that in Gibtown. The animals are not only expensive and their livelihood, they are often largely part of their families. Years ago, I once interviewed a true gentleman in Gibsonton with a miniature horse. The horse had a doggie door on the back door of the man’s house. He would come in to have his meals and would even sit down on the couch to watch TV with him. That horse would not have been happier in the wild. And he had a very large yard to run and play in.

I met another Showman with monkeys and other primates. The entire interview revealed a very tight bond between the man and his animals. They loved him, as he loved them — had someone offered to set them free, I have no doubt they would have refused. And their lives would have certainly been much shorter by doing that.

And this one bears a repeat: I’ve yet to encounter any group of people so completely devoted to family. Entire families work together — they stay together 24 / 7. They help and respect each other. In these modern times with smart devices eliminating personal interaction, most families could learn a great deal from Showmen families. I know that, because I’ve seen it many times and always walk away impressed and with admiration.

Many of the people in Gibsonton, back in the heyday and even today, are stars — certainly for the moments they were performing in one city or another along the road. They do everything in their power to put on a show. Their life dedication to their craft, to entertaining people … they deserve that designation.

And to me, they are among the brightest of stars.

Writer’s Note: Lee Stevens, thank you for the many good things you and your fellow Showmen do in this community, all without even an expectation of a thank you. And thank you for many years of friendship. It was good to see you on Saturday at the circus. And, as for the circus … Bravo!

Click here for photos from the 2017 Gibsonton Charity Circus.