The abandoned Spanish-style building in Ruskin was a theater?

I moved to South County in January 1980 and have always wondered about the Spanish-style two-story building on the west side of U.S. 41 right in the heart of Ruskin. Even at that time, the building was abandoned and in a state of disrepair, but still showed that it had once been a site of great importance.

I didn’t know what the building had been, but Kenneth Faulk does.

Faulk recently wrote to inform me that the building so many newcomers often wonder about was a movie theater when he was a child. His family moved to the area in 1940, when he was 3 years old. He told me that when he was in the 6th grade at Ruskin Elementary School, his class walked to that theater to go to the first movie played there. It was Mr. Peabody and the Mermaid.

Faulk’s letter brought back two extremely vivid memories for me.

One was that Mr. Peabody and the Mermaid was the very first movie I saw on our first 13-inch television back in Asbury Park, N.J.  I guess I was about 10, which was a year or two after we got our first TV.

The movie came on the weekly “Million Dollar Movie” that used the theme song from Gone with the Wind. I wasn’t permitted to stay up past 9 p.m., but I remember hearing it playing from downstairs while in my bed in my attic bedroom. 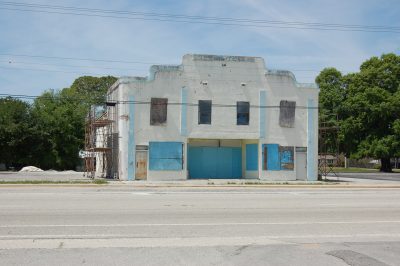 As soon as Faulk wrote me last week, I remembered how much I loved that movie and looked up the history of “Million Dollar Movie.” According to Wikipedia, the show was named “million” because in those times, spending a million dollars to make one movie was a ton of cash, where nowadays that’s considered “small change” considering the cost of special effects and stars’ multi-million-dollar pay.

Many readers from the Northeastern part of the country will remember it as WOR-TV Channel 9’s special night on their black- and-white televisions beginning sometime in the mid-1950s.

But Faulk remembers it on the big screen.

“We walked there because the school board said it would be a good thing for us to see,” he said in his e-mail to me. “I still remember Ann Blyth and David Niven (in the two major roles).”

Meanwhile, what I remember is the haunting tune that played every time the movie’s hero stood out looking over the sea watching for signs his “impossible” love was near.

The second thing Faulk’s letter brought up for me was remembering the abandoned theater on Deal Esplanade in a small suburb of Asbury Park (called Deal) where we used to ride to on our bicycles and spend whole days.

The place had been a live theater from the turn of the 20th century until about 1940, and by the time I was 8 or 9 years old, had been closed up quite a while — leaving everything — including costumes and clothing from the Roaring Twenties and more!

There were boas and large feathered hats, fancy coats, tulle ballet skirts and ball gowns, as well as men’s suits and knickers and all kinds of shoes.

I never got permission from any adults to go into the building (which we entered through a broken-out window covered by a piece of loose plywood), and I now see the reasoning behind that because there was plenty of evidence of squatters living there, like beer cans and cigarette butts around small “camp-type” fires. But we’d go in groups of three and four and try on costumes that were often fraught with cobwebs or dirt; get up on the big stage and sing and dance and have a grand old time. Several times we found shed snakeskins in the closets. I guess we were just lucky we never got hurt.

When I went back to New Jersey for my 25th class reunion in 1988 I visited the site of the Deal Esplanade Theater and found no sign of it; only homes.

Faulk’s letter brought back these two childhood memories for me, and made me wonder just how many children similarly entered “forbidden” places like the old theater in Ruskin and did the very same things. We don’t seem to sense the danger until we’re old enough to look back, or maybe things are just different now.

But thank you Kenneth Faulk for telling us more about the theater’s early days. You also wrote about the old Cabaret and the recreational facilities you and your eight siblings visited as children, which included a large community swimming pool with several diving boards and a roller skating rink. The Cabaret and facilities occupied the entire west side of Shell Point Road just past what is now the entrance to Little Harbor.

I’ve received several e-mails from people who remember South County “back in the day” and hope readers continue to write. We all have memories that are sparked by the stories of others so please write me at penny@observernews.net and tell me some of yours.

It’s always good to look at years past while we’re making plans for new things in 2017.