The Circus is coming! 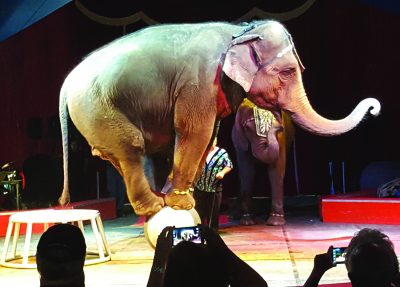 The annual Showmen’s Charity Circus is Saturday, Jan. 7, at the Showmen’s Event Center at 6915 Riverview Drive in Gibsonton, with three big shows under the big top at 1, 4 and 7 p.m. Advance tickets are available at the Showmen’s Club (address above), or at The Observer News office and M&M Printing, 210 Woodland Estates Ave. SW, Ruskin (cash only); and at Paradise Pet Salon, 9417 U.S. 301 in Riverview. Adult tickets are $12 in advance, $15 on show day. Children 12 and under are admitted free when accompanied by a paying adult. Pick up a free child’s ticket at one of the locations above or cut out the ad on page 3.

This is a traditional American circus under the big top with acts from around the globe accompanied by the world’s largest, live circus band.

And no circus would be complete without performing animals. This year there will be two center ring spectaculars with Captain Wayne and his performing Bengal tigers, and the amazing Franzen and his performing elephants. You will be amazed as these ponderous pachyderms entertain you.

The Showmen’s Club has been presenting this charity circus for 35 years. All performers and staff volunteer their efforts, with all proceeds going to local charities.