Dreams of a bullet-free sky

Dreams of a safe New Year free of falling bullets 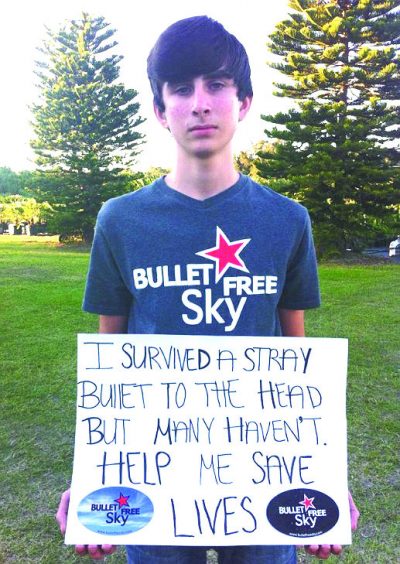 After being critically wounded by celebratory gunfire in 2012, Diego joined in his mother’s effort to educate the public and gun owners of the dangers involved.
Photo courtesy of Sandy Duran

Somewhere among us is an individual who’s celebratory bullet struck a 12-year-old boy in the head. The shooter could have been either a man or a woman, but statistics suggest it was probably a man. He has never been caught; he has never paid a price for his crime. He walks among us, somewhere. He may have even tried again.

Despite the best efforts by law enforcement, the person who shot Sandy Duran’s son, Diego, in the first moments of 2012 remains free.

The Duran family is close-knit. The parents are loving and attentive; their kids polite, secure and grounded. They knew that New Year’s Eve could be a dangerous time to be on the roads, but they had no reason, no idea whatsoever, that the front yard of their Ruskin home, a calm and peaceful acreage oasis, could be an equally, if not more, dangerous place to welcome in the New Year, together as a family, watching distant fireworks.

And then, suddenly, Diego collapsed. A bullet had entered the top of his skull and lodged itself deeply, perilously inside his head. His condition was critical. Still a child, he endured multiple surgeries and a recovery period that stretched into years.

Somehow, even in 2016, this is a difficult concept for some people to grasp: You cannot shoot the moon with a gun while standing on earth. If you fire a weapon into the air, your bullet (and yes, when you pull the trigger, it is your bullet) will come down somewhere. Given the increasing population density of South Hillsborough County, it could come crashing down through a roof down the street, through a lanai in Sun City Center, or into the skull of an innocent child.

With the strong support of his family, with seemingly endless medical procedures and therapies and perhaps with a miracle or two, Diego survived being the victim of so-called celebratory gunfire. Although knowing what the young man went through to survive — it is difficult to describe him as “lucky” — not everyone is so lucky.

Just three years after Diego was shot, on January 1, 2015, a 43-year-old man in Houston was killed when he was struck in the head with a bullet while he was watching fireworks with his family.

On July 3, 2015, a 60-year-old man was struck in the chest while sitting around a campfire with his family in Colorado. 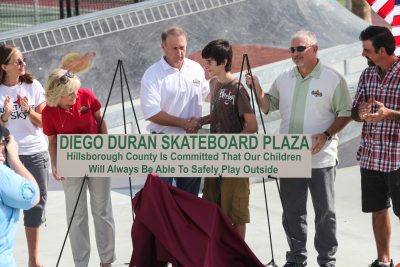 In 2012, the Hillsborough County Board of County Commissioners voted to name a new skateboard park in Apollo Beach in Diego’s honor. Above, Commissioner Ken Hagen shakes Diego’s hand while Commissioner Sandra Murman and Diego’s parents look on.
MITCH TRAPHAGEN PHOTO

The tragedies go on endlessly…from a 28-year-old mother of two who was struck in the eye and killed (the shooter in that case turned himself in) to a 4-year-old boy in Georgia who was struck and killed by a bullet while inside of a church. Law enforcement described that death as, “most likely the result of a bullet fired into the air by someone celebrating the New Year.”

When her child suddenly collapsed that night, Sandy Duran had no idea he had been shot. She felt blood coming from his nose and mouth. The x-rays revealed the reality: A full-metal-jacket 45-caliber bullet had traveled through his skull.

Just stop and imagine the horror of the examples above. Innocent people with their families senselessly, silently struck down. One moment there is peace and happiness; the next there is tragedy. The senselessness of it is staggering.

The person who shot Diego may have pulled the trigger from miles away. The family didn’t hear the sound of the shot that critically wounded him.

With her son still in the hospital, Sandy Duran felt driven to do what she could to ensure that no other families would suffer from such needless, senseless horror. She would go on to be the founder of a nonprofit organization, Bullet Free Sky, and began working overtime to educate people of the dangers of celebratory gunfire. She set up booths at nearly every local event, along with many throughout Hillsborough County. She raised money to pay for public service videos and educational materials.

There is no possible way to estimate the impact of her hard work over the years. There is no way to count a bullet that was not fired into the air  thanks to education.

But almost certainly she did have impact. Because of her work, which was in addition to being a devoted parent to her children, and holding two jobs, there are likely people alive and uninjured today because of her. 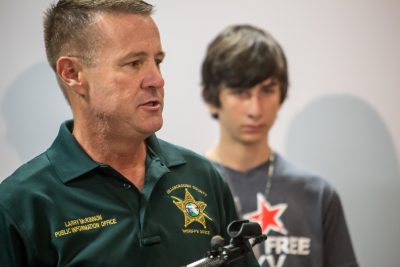 Hillsborough County Sheriff’s Office Public Information Officer Larry McKinnon has long supported the efforts of Bullet Free Sky, using his podium to spread the word on the dangers of celebratory gunfire. Diego is pictured behind him at a 2013 press conference.
MITCH TRAPHAGEN PHOTO

Yet the challenge remains. Every year there are news reports, even in the Tampa Bay area, of people injured by falling bullets on New Year’s Eve and the Fourth of July, the two holidays with the most instances of celebratory gunfire. But there have been no recent deaths in the area.

“We have done our part in raising awareness on the dangers of celebratory gunfire,” Duran said. “We have worked hard to get the word out since 2012 and learned a lot. We also gathered facts, created videos and many useful tools for those who are also interested in spreading the word about a deadly practice that affects us all. It will take the participation and continued effort of many more to put a stop to celebratory gunfire.”

For the past four years, Duran and the board of directors she invited to manage Bullet Free Sky have done everything possible to spread the word of the dangers of celebratory gunfire. Her mission was not anti-gun by any measure — she completed firearms safety and proficiency training — it was simply to stop the reckless and deadly practice of firing bullets into the air.

The motto of Bullet Free Sky was simple: “What goes up must come down.”

In those past years, she has given up weekends to attend craft, art and food fairs; she was sought out by media every New Year’s Eve and July 4th for interviews and in the process has relived the nightmare of the first moments of 2012 when someone, perhaps from miles away, attempted to kill her son through ignorance and a complete lack of responsibility in handling a weapon. She forged lasting relationships with officers at the Hillsborough County Sheriff’s Office and at area gun shops.

And now it is time for her to step back. It is time for her now-teenage son to move on, too. Her focus has always been on family: Often your family is working to educate people on the dangers of celebratory gunfire. But now it has to be on her own family once again. 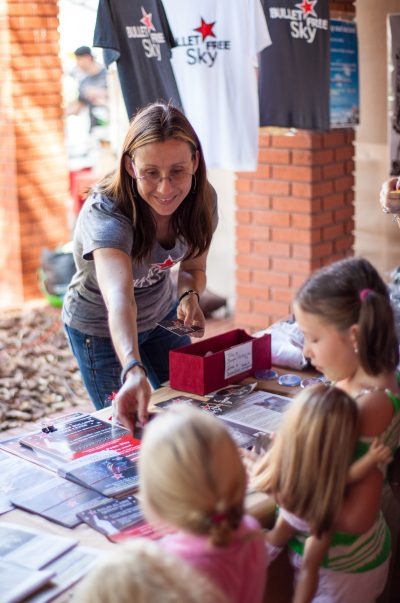 Sandy Duran, founder of Bullet Free Sky, attending one of many dozens of events and markets in Hillsborough County providing information over the past four years.
MITCH TRAPHAGEN PHOTO

On Dec. 1, the board of directors of Bullet Free Sky voted unanimously for a voluntary dissolution of the organization. There were enough remaining funds to produce a Spanish-language version of a public service video and to ensure the Bullet Free Sky website would remain online for years to come.

When the television cameras came on and when the microphones went live, Hillsborough County Sheriff’s Office Public Information Officer Larry McKinnon has stood beside her; the owners of Shooter’s World, a Tampa firearms store that also offers classes, have stood beside her — with Sandy in the center, an expert on a subject she could never have imagined knowing anything about. And now going forward, Officer McKinnon is continuing to spread the world from his podium, asking others, from Shooter’s World to the Board of County Commissioners, to join him.

“This awareness effort still stands strong and will continue to be available to all English and Spanish-speaking communities,” Duran continued. “It is everyone’s responsibility to take action if we want to see true results.”

Somewhere out there is a person who struck a 12-year-old child in the head with a .45 caliber bullet. There is no vengeance in Sandy Duran’s heart. There is only compassion and love, and that hasn’t changed. She only wants for her family to be safe, for your family to be safe and for our skies to remain bullet free forever.

For more information, including educational videos for individuals, schools, media and gun instructors, along with graphics for posters and t-shirts, visit www.bulletfreesky.com.

Disclosure: Mitch Traphagen was a member of the Bullet Free Sky board of directors. 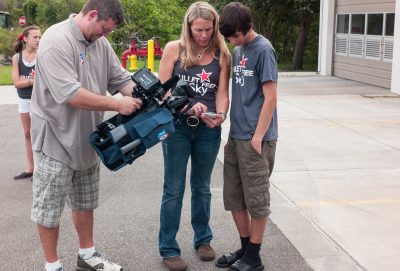 For the past four years, media interviews have been a part of the lives of Diego and his mother Sandy, with interviews every New Year’s Eve and Fourth of July. Above, Diego with Bullet Free Sky board member Kim Skidmore before an interview with Bay News 9 in 2013.
MITCH TRAPHAGEN PHOTO

The Circus is coming!