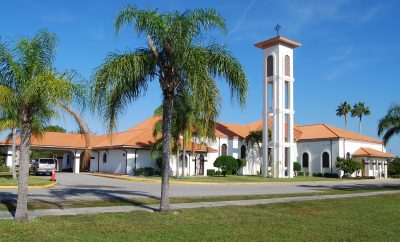 Just as other Christian churches in the area, parishioners of Holy Cross Catholic Church north of Palmetto were busy preparing for Christmas for the last few weeks.

It started four weeks ago when they placed the Advent wreath next to the altar in their sanctuary. Each Sunday as part of the liturgy, another candle would be lit to symbolize the anticipation of the birth of Jesus.

During their religious education classes the children of the parish were busy practicing for their Nativity play.

And there was the decorating of the church and grounds for the special day.

These weeks of preparation and activity will culminate at Christmas morning Mass.

These or similar celebrations and liturgies were practiced at all Catholic churches in Manatee County, but with a large population of parishioners with Hispanic heritage there were special events to make the story of the birth of baby Jesus more meaningful for them. 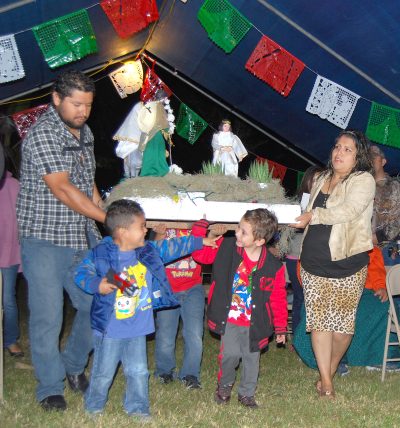 The Moreno family carries figurines of Mary, Joseph, and an angel to the front of the gathered parishioners of Holy Cross Catholic Church during the Dec. 15las posadas ceremony.

“We are all brothers and sisters in Christ and part of God’s family,” said the Rev. Bernard Evanofski, the pastor of Holy Cross Church at 505 26th St. W. in Palmetto.

There are almost 700 families of the 1,100 in the parish who are of Hispanic ancestry.

Father Evanofski, who served at a mission in Honduras for three years, remembers some families there would have a life-size statue of baby Jesus.

“At Christmas Mass they would come up to the front of the church to have the statue blessed,” Evanofski said. “Then they take it to the back of the church where the husband and wife would put the figurine in a blanket and gently swing it as if rocking it to sleep while everyone sang lullabies.”

Tania Rangel, the receptionist and coordinator of religious instruction at Holy Cross Church, said she still follows the Christmas traditions her grandmother brought to the United States from Matamoros, Mexico.

As a little girl, the 29-year-old Rangel remembered food being a big part of the celebrations.

“There were lots of tamales, rice and beans and hot chocolate,” said the Palmetto native.

“Christmas Eve is like New Year’s Eve to us,” Rangel said. “We would go to Mass, then after Mass the families (would) get together to wait until midnight. 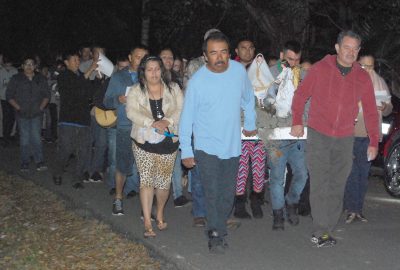 Parishioners of Holy Cross Catholic Church follow men carrying the figurines of Mary, Joseph, and an angel down a neighborhood street during the Dec. 15 Las Posadas ceremony.

“We would recite the rosary at around 11:15 (p.m.) until midnight, then at midnight we would open our presents,” she said.

Another custom many Hispanic families observed, Rangel said, was to have a nacimiento or nativity scene set up in their home and each year a couple would be chosen to be the “Godparents” of the baby Jesus. They had to create the family nacimiento with a manger.

One of her fondest memories of Hispanic Christmas traditions was the Las Posadas held at the homes of parishioners.

“Every year we couldn’t wait to get the schedule of the Posadas; it was such a beautiful thing,” Rangel said.

Las Posadas are held each of the nine evenings before Christmas and are a reenactment of the expectant Mary and her husband Joseph’s journey to Bethlehem and search for shelter along the way.

“Today I want my kids to know what a beautiful thing it is,” said Rangel, who has two daughters, Marissa, 5, and Marie, 1. She has a baby boy on the way.

“As a child I remember walking from house to house with all the people, and some of the homes would have beautiful lights,” she said. “As I got older I realize what a really powerful thing the Las Posadas was. 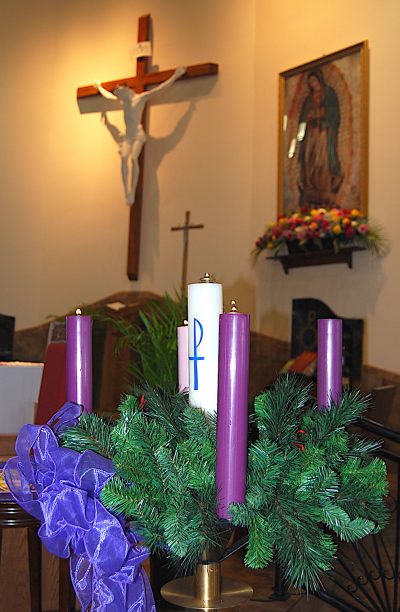 The Advent wreath near the altar in Holy Cross Catholic Church symbolizes the anticipation for the birth of Jesus.

“More people have to realize how important Christmas and Jesus’ birth is,” Rangel said.

The first night of Las Posadas for the parishioners of Holy Cross Church was held Dec. 15 at the home of Adriana Moreno, just east of the U.S. 41 and U.S. 19 intersection.

As a band of guitars, a mandolin and piano played, people sang traditional seasonal hymns in Spanish, and more than 100 people gathered under and around a large canopy set up like a church.

Brightly colored banners of red, white and green, the colors of the Mexican flag, hung from the canopy, and bright, multi-colored lights twinkled up front.

With everyone seated, the ceremony began with the family of Adriana Moreno carrying the figures of Mary and Joseph from the back of the gathered group to the front and placing them on a decorated platform.

Then Isabel Kurzke, coordinator of Spanish ministry, led the group in song and began to recite the rosary in Spanish

There were lots of children, some sitting on their parents’ laps, and others enjoying the evening by chasing their friends and siblings through the crowd.

The procession down the middle of the street to the first house started as the Moreno family, carrying the figurines of Mary and Joseph, led the way. 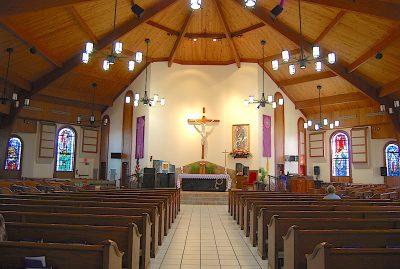 The sanctuary of Holy Cross Catholic Church before the church staff start to decorate it for the Christmas holy days.

Then the band and everyone else holding a lit candle followed, singing traditional Las Posadas songs.

In a call and response manner the crowd asked three times if there was room in their home for Mary and Joseph, and the family of that home would sing back.

“This is a very Mexican tradition, said Kurzke.

“The family at the first house says no, and we walk to the second home and ask the same thing,” she said. “They say they don’t know who this couple is, so they also say no.

The procession ends up back at the host family’s home where they say yes and receive Mary and Joseph.

Brenda Moreno, cousin to the host, Adriana Moreno, said as an adult she appreciated the meaning of Las Posadas.

“As a child it was just a party, but as I got older I realized it was about the Virgin Mary,” she said. “It’s important because tradition is how kids learn.”

“As a child I learn about the story of Jesus’ birth in church,” she said, “but they didn’t have this ceremony.

“I will continue this custom,” Maria Moreno said. “It’s through experience that your faith may grow stronger.”

The Las Posadas at Holy Cross was very special for Teresa Leon. 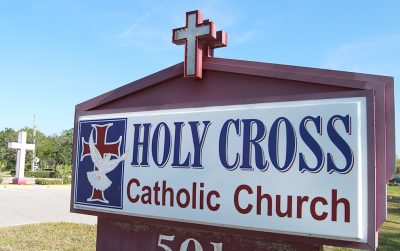 She said her father, Victor Leon, who passed away three months ago, brought the custom of Las Posadas from his hometown of Celaya, Mexico, to the parish 38 years ago.

“He brought the figurines of Mary, Joseph and the angel from Mexico,” Teresa Leon said.

She was 7 years old when she moved to Palmetto and grew up with the Las Posadas tradition.

“We brought the tradition here to show everyone our customs,” she said.

The chilly evening ended with a large feast of food and hot drinks, and then a piñata was hung for the children to take turns in trying to break it open with a whack with a stick while blindfolded.

When a lucky blow to the piñata was made, the hundreds of pieces of candy and treats flew to the ground where the children scrambled to pick up as many as their little hands would hold.

The Rev. Evanofski said the holiday season at Holy Cross would not end on Christmas 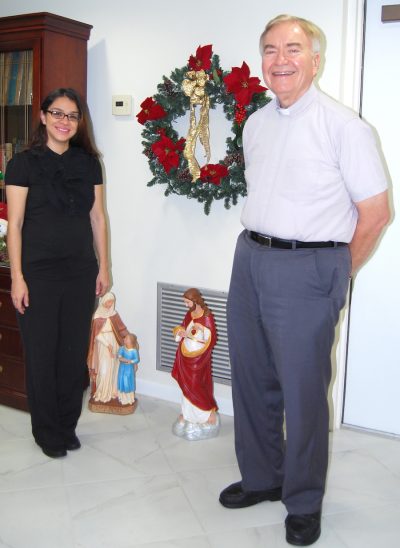 Tania Rangel, receptionist and coordinator of religious instruction at Holy Cross Catholic Church, left, and the Rev. Bernard Evanofski, pastor of the congregation north of Palmetto, pose in front of a Christmas wreath recently as they prepare for the holy days.

Parrish leaders also were getting the word out about a special holiday concert.

World-renowned tenor Michéal Castaldo will hold a Christmas in Our Heart concert at 4 p.m., Jan. 8, to celebrate the Feast of the Epiphany.

Castaldo also will sing at all the masses on Jan. 1.

The concert will be free, but attendees will be asked to donate to the scholarship fund for students of the parish.

For more information about Holy Cross Catholic Church go to their website at holycrossdov.org.