Apollo Beach teen is a man on a mission 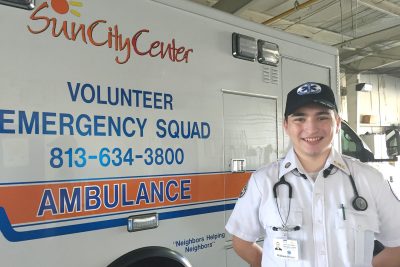 At age 19, William Reyes has accomplished more than many other guys in their mid to late 20s. After graduating in 2015 from East Bay High School, he immediately enrolled at the Florida State Fire College in Ocala to train for certification as firefighter I and II. He completed that training November 2015.

“There are few jobs available solely for the role of firefighter throughout the state,” Reyes said, so I also needed to be certified as an emergency medical technician.”

He had to wait until April for the next class offering.

Meanwhile a Hillsborough County employee and friend of Reyes’ grandmother recommended he apply to work as a Sun City Center Emergency Squad volunteer for some on-the-job-training. Anyone working on a Sun City Center Emergency Squad ambulance crew is required to start as an emergency medical responder, someone who takes patient histories and documents meds, allergies, medical histories and all actions taken by the ambulance crew, including the EMT and driver during each patient interaction.

After his three weeks of squad training, Reyes was certified as an EMR, but by the time that happened he had to return to the Fire College for 10 weeks of training as a certified emergency medical technician. He then returned to the squad and began working on a crew as an EMT. 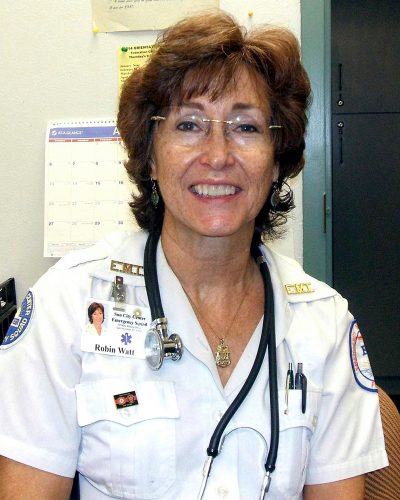 “We were very lucky William came to us and had all of his training completed,” said Robin Watt, assistant chief of communications and an EMT on Team 7. “William is enthusiastic, reliable and good with patients. We love his youthful energy and having him around the squad.”

“We see our role as mentors for both the job he will one day hold and his further development as a young man.”

As an EMT, Reyes leads an ambulance crew of three, is responsible for assessing a patient’s medical condition and providing basic interventions such as dressing wounds, applying oxygen or splinting a broken bone. He also determines if the patient requires transport to the hospital for advanced care and if Hillsborough County Fire Rescue must be brought in.

Reyes said he didn’t always see himself on his present career path.

“When I was a kid, I wanted to join the military,” he said, adding his father, Army Sgt. Maj. Raymond Reyes, is a Ranger. “But my grandfather, Michael “Pop” Covine, (who served Hillsborough County Fire Rescue for 28 years), recommended I become a firefighter when I was in high school,” he said. “He told me the military would always be (an option), but now was the time to become a firefighter because so many jobs had opened up after the state’s retirement system changed under Gov. Scott.”

After talking with his family, Ryes decided to follow his granddad’s promptings.

“Now that I’ve gone through training, I love it,” he said. “There’s no other way to describe how I feel about the job and of making it a career.”

“Not only do I get to ride in a truck with flashing lights and sirens, I also get to help people and be part of the community,” Reyes continued. “I like being able to be there for someone in their time of need.”

To further his credentials and qualifications, he will begin working on an associate’s degree in fire science at Hillsborough Community College in January, and he plans to attend classes next summer to earn certification as a paramedic.

The squad is always in need of adult volunteers interested in working as emergency medical technicians and students (ages 18 and older) considering careers as EMTs or paramedics.

All applicants must take at least one semester (250 hours) of training at Hillsborough Community College and be licensed by the state. The squad is willing to foot the bill for those who trained and worked as EMRs for about a year.

Anyone interested in learning more can drop by the squad’s main office at 720 Ray Watson Drive and speak to Chris McCann, attend an informational meeting the second Wednesday of the month at 124 S. Pebble Beach Blvd., visit sccems.com, or call 813-633-1411.