A home for Christmas

Observations: A home for Christmas 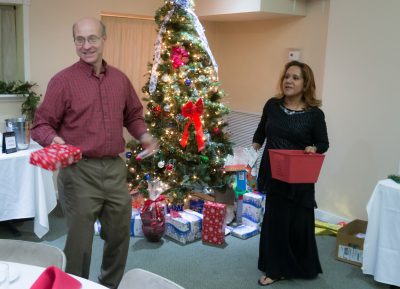 Owners Wes and Karina Mullins passing out gifts at their company Christmas party. Everyone was family that night.
MITCH TRAPHAGEN PHOTOS

I doubt I’m alone in describing the formative years of my life as made up of blessings along with a curse or two. The youngest of four, by the time I had reached my teenage years, I was the last child in the house. It was the late 1970s, and life was about as good as it could have been on the wind-swept plains of rural Minnesota, a place where the vast majority were neither particularly rich nor particularly poor.

At some pivotal age, I believe it was 13, a man from the telephone company came to install a telephone in my bedroom. No, it wasn’t a private line. It was a simple, rotary-dial desk phone that was an extension of our home phone. But I was awestruck. My parents were certainly loving and generous.

Later that same year my Dad came home from work early. In those days, his position at the town’s college was both critical and demanding. He often worked late into the night; as a family, our first sight of him was preceded by the sound of his footsteps on the tiled floor of the family room leading to where we were all gathered around a massive piece of furniture that was a television then — it was often after 9 p.m.

So I was the last child, my parents had already sent three off to college, and if my Dad came home early, on the rare times he was able, I was 95 percent certain that it was something good — perhaps to build a kite or a go-cart or our (actually his, but he let me think I helped) crowning achievement: A fort with screened windows and storm shutters. He even found a square of cement for a doorstep, placed a small padlock on the door and gave me the key. There could not possibly have been a happier kid in all of Worthington, Minnesota.

But the 5-percent chance of something not so good somehow always had more weight in my mind. Adolescent boys do have the tendency to be idiots now and again. 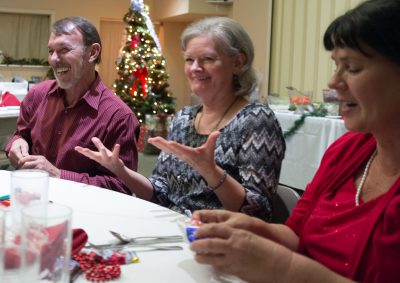 So when he yelled harshly from the top of the stairs, I didn’t stop to think, I ran…to find him sitting in the living room (not far from the not-so-private kitchen telephone I no longer had to use); he was smiling and next to him was an electric guitar and small amplifier. It was the same setup I had been admiring in the J.C. Penney catalog for weeks. Things like that just didn’t often happen in the 1970s. He ordered it; the local store called him at work when it arrived, he drove to get it and came home. It was just the two of us and that guitar in the room — a kid and a Dad who made a dream come true.

He believed that if I wanted to be a musician, if that is where life would call me, then he would help me along that rocky path. He later bought my first real camera (I was to pay him back with my royalties later in life). He believed in dreams. He paid for guitar lessons, and I learned a few songs that he told me were his favorites. A few years later I became a guitar teacher myself. I hope I helped some of my students learn the songs their parents would say were their favorites.

When I was 15 my Dad died suddenly. I remember every detail of last seeing him alive. My Dad was well-known in town, and when the call went out in the dark, early morning hours, our house filled with EMTs, police officers and volunteers. One officer, seeing my shattered Mom at our kitchen table, told me that I had to grow up right then and be a man. I would have to help her.

At that point, she was 10 years younger than I am now. It was 1978 and she never remarried. She passed away just two days shy of the 36th anniversary of her husband’s death.

Through the act of writing, I’ve long known that I’ve spent life since looking for a place called home. One of my dearest friends in the world, Brenda Knowles, the late editor and publisher of this newspaper, recognized it and encouraged it. She allowed me the freedom to search. And when that once carried me to a small town in Iowa for a year, we still had long talks every week over the phone. Even today, another dear friend, Chere Simmons, the editor and artistic mind of this newspaper, along with the owners, Wes and Karina Mullins and David Payne — people I’m honored to call friends — still support that as I fly back and forth from a city in the north.

How is this a Christmas story, you might ask.

Earlier this month was The Observer News / M&M Printing Christmas party. The above mentioned owners invited everyone, including freelancers. Freelancers (including me) aren’t technically employees but to Mullins and Payne, we are all family.

I’ve been with The Observer News for the better part of 15 years. And on that night, as Wes passed out gifts to everyone, with all of the associated spouses and partners enjoying the evening, I became aware again of just what home meant.

Ironically, the youngest of four, a guy in search of a place or time in which the footsteps on tile late in the evening meant our family was all together again, I am the only one of my siblings who left Minnesota and never returned to live there again. I love my family dearly…more with each passing day. But I looked around to see Wes, Karina and David smiling and laughing with real happiness. I saw people I’ve known for years and those I had just met. A tree was decorated, the food was delicious and the company was incomparable.

All this time I had been looking for a home. I found it at work. I found it at that party, with people who would help me to walk the rocky path of being a writer and a photographer.

I had the chance to say goodbye to my mom and to Brenda. I didn’t have that chance with my dad, nor with a life-long friend I lost last year. Life can be so short and sudden; you reach a point where you simply can’t take things for granted.

As I left the party, I gave Wes and Karina a hug; I shook David’s hand. I doubt they know the true depths of the gratitude I hold for them. But I hope they do.

And the same holds for you, dear reader. Thank you from the bottom of my heart for reading these words, whether for years or even just today.

So with that, Merry Christmas. May the season and the coming year be filled with blessings and happiness for you. I’m not certain if you can know the depths of my gratitude for you. But I hope you do.