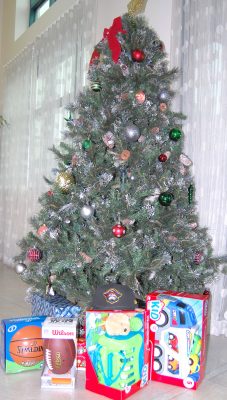 Even though baseball is in its off-season, Marty, the loveable mascot of the Bradenton Marauders, will be busy this Saturday collecting toys for the Christmas season.

Marty and the 100 or so staff members of Pirate City will be there to collect unwrapped new toys to be donated to The Salvation Army’s Adopt-a-Family program.

“Close to 600 toys were donated last year,” said Carley Paganelli, marketing and community relations coordinator for the Pittsburgh Pirates organization. “So we hope to reach more than 800 this year.”

All of the Pirate City staff will be bringing in toys for Marty the week before the event, and Hooters restaurant has donated $500 to purchase additional toys, so Paganelli said she thinks they will reach their goal.

“We want this event to grow every year, and with Hooters’ help, to make an impact in the community” she said.

The Adopt-a-Family program has been part of Salvation Army for three years, said Kelly French, community relations and development director for Salvation Army.

Before that the program had been a community program run by volunteers for many years, but they asked the Salvation Army to help.

French said Adopt-a-Family was very important to the parents who want to provide a good Christmas for their children, but cannot afford it.

“If you think how as a parent you would feel if you couldn’t provide the great excitement of your children opening gifts on Christmas morning,” she said. “with Adopt-a-Family it gives the parents a chance to share that excitement,” said French. “And for the community it provides a good feeling to know you helped make a child’s day.”

She said they are in need of new clothing for children between the ages of 10 and 14.

The Salvation Army Adopt-a-Family program will help provide gifts for more than 1,500 children whose families are in need of assistance.

Members of the community sign-up with the Salvation Army to “adopt” an entire family, or as many children as they can, and provide toys and gifts for Christmas. 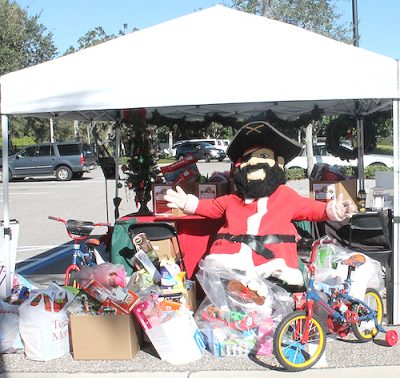 Marty Claus rests after a day of collecting toys for Marty’s Toy Drive last year. The toys collected this year also will go to help children in the Salvation Army Adopt-a-Family program.

Community donors already have pledged this year to buy gifts for more than 900 children, according to a Pirate organization press release.

Marty’s Toy Drive will help The Salvation Army fill the wishes of the other children yet to be adopted, Paganelli said.

“Lots of parents brought their children to teach them the lesson of giving,” she said.

Paganelli said they also are looking forward to having the snowbirds join in the festivities to make it a nice turnout.

“We want everyone to join us,” she said.

Those attending will enjoy a light breakfast and receive a Marauders promotional item, such as a hat or T-shirt.

They also will be entered into a drawing for four spring training tickets, and can have their picture taken with Marty Claus. A digital copy of the photo will be e-mailed back to the donor.

The focus of Marty’s Toy Drive will be more with Marauder fans, Paganelli said.

The Bradenton Marauders have been the Class A-Advanced affiliate of the Pittsburgh Pirates since October 2009, playing in the Florida State League.

The Pirates have been coming to Bradenton for spring training and playing at McKechnie Field on Ninth Street West since 1969.

But come April, after the major league players head to their home city of Pittsburgh, the Bradenton Marauders take over McKechnie, giving the community hometown baseball excitement for five months.

According to the Marauders’ website, the team has had great success through the years.

In the postseason of their first year, they won the Florida State League South Division second-half championship.

They also saw postseason play in 2010 and 2014, and in 2016 the Marauders captured their first Florida State League championship.

For questions or information on volunteering for Salvation Army’s Adopt-a-Family program, e-mail Annette.Horner@uss.salvationarmy.org, or visit SalvationArmyFlorida.org/Bradenton.

Sounds of the Season