Three-quarters of a century, decades of remembrance 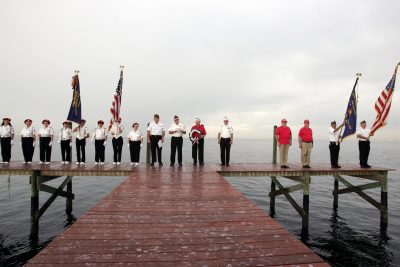 The Ruskin VFW Pearl Harbor Day ceremony at Little Harbor Resort in 2006. Some of the participants are no longer with us. MITCH TRAPHAGEN PHOTO

It was a beautiful Sunday morning in paradise. A Yeoman 2nd Class in the United States Navy was wearing his dress whites, waiting … having just missed the first launch to shore so he could attend church service. Just like any other Sunday.

But that Sunday changed rapidly. Edward Socha was waiting for another ride to shore when he saw the “big red ball” of a Japanese Zero flying directly overhead. He believes he saw the first torpedo splash into the water, aimed specifically for death and destruction.

Socha, ran from the USS Oklahoma, where he was only moments ago waiting to go ashore to church, back to his ship, the USS Maryland and his battle station. By the time he arrived, he looked back on the Oklahoma and saw that it had already turned over in the water.

His own ship, the Maryland, suffered two bomb strikes but stood fast. Socha describes it as the luckiest ship in the fleet.

Today the USS Arizona remains a monument to the day that has lived in infamy — December 7, 1941. 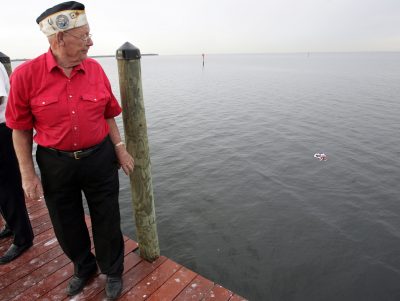 Pearl Harbor Survivor Ed Warren glances back at the wreath after the 2006 Pearl Harbor Day ceremony held at Little Harbor in Ruskin. He said he remembered Dec. 7, 1941 as though it were yesterday. In taking this photo, I could imagine his thoughts.

Imagine for a second the sheer terror and destruction of that day. It came from nowhere on a beautiful Sunday morning at the U.S. Naval Base at Pearl Harbor, Hawaii. It ended with the mass destruction of ships and airplanes, and more importantly the loss of 2,403 Americans, with another 1,200 wounded. Furthermore, the attack, which began at 7:55 a.m., was sustained. The death and destruction continued as men like Ed Socha began to fight back.

This month marked the 75th anniversary of the attack on Pearl Harbor, an event that carried the United States into World War II. The Navy wasted no time in rebuilding the Pacific fleet. The Maryland was repaired and back in service in just over three months. Only six months after the attack, the Navy had their revenge in the Battle of Midway, an extraordinary victory over what had once been considered an invincible Japanese navy.

It is now three-quarters of a century in the past. But even as the years rolled on, the members of the Ruskin VFW Post, with the VFW Ladies Auxiliary taking the lead, did not forget. In 2002, there were four survivors living in or near Ruskin to take part in a wreath ceremony at the Little Manatee River. By 2004, there were two survivors taking part. By 2006, there was one. 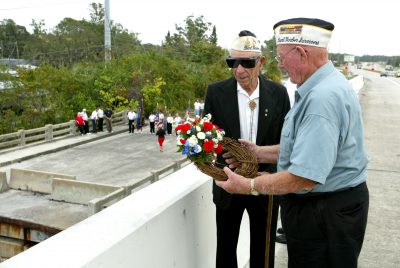 From Pearl Harbor Day, 2004, survivors Michael J. Tiberio and Ed Warren prepare to toss a wreath of remembrance into the Little Manatee River in Ruskin. The events were organized by the Ruskin VFW Post Ladies Auxiliary. By 2006, only one survivor remained for the ceremony.

Today, Retired USN Commander Ed Socha stands alone in South Hillsborough as a survivor of that fateful day. He is a lifetime member of the Pearl Harbor Survivor’s Association — an organization that exists more in spirit than in function. In December 2011, with a membership of 2,700 members, it effectively disbanded.

There are no exact estimates for how many survivors remain with us but all are in their 90s today. In decades past, more than 3,000 would attend the Pearl Harbor Day ceremonies at the USS Arizona monument in Hawaii. This month, for the 75th anniversary, it was estimated there may have been 100 in attendance.

In New York City a ceremony was held aboard the USS Intrepid, a former aircraft carrier now permanently moored as a museum. There were only two survivors in attendance. With some assistance raising it over the high gunwales of the still mighty ship, they tossed a wreath into the Hudson River on a cold, dark and cloudy day. 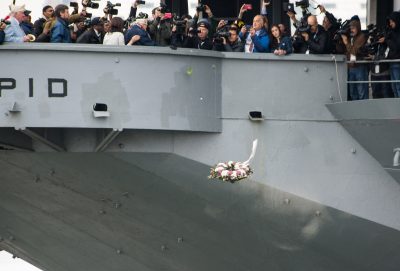 In New York City, on Dec. 7, 2016, two survivors, Aaron Chabin, 93, and Clark Simmons, 95, toss a wreath into the Hudson River while engulfed by members of the media from the USS Intrepid, an aircraft carrier turned museum.

Those who perished on that day 75 years ago, and those who have passed since, are not honored by their deaths. They are honored in remembrance — it is honor from the ultimate sacrifice, from bravery, from pain, from perseverance in the face of the unimaginable, all bestowed by a grateful nation. The decades cannot change that gratitude. Those who survived deserve the endless gratitude of all Americans, and of all the free world today.

Commander Edward Socha is an American hero — not just because he survived, but because he fought for us. And the day after, on December 8, 1941, he continued the fight; he kept going until the United States won the war. And then he kept on serving this nation. Today he stands tall among us, taller than many presidents, many generals, or royalty. Despite the passing of decades, he still stands with the men and women who have and continue to put their lives on the line to protect and preserve this nation. 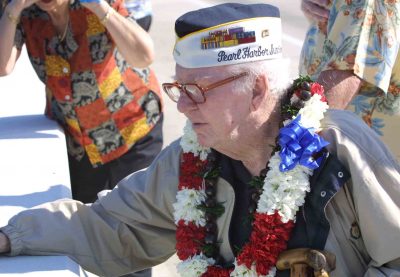 For men like Edward Socha, for the men and women who put their lives on the line yesterday and today, every day is Pearl Harbor Day; every day is Veterans Day. The gratitude of a nation cannot be restricted to a holiday or a date on a calendar. But for those who survived and fought back in the first American battle of World War II on December 7, 1941, time is running out to express that gratitude in person rather than only in our prayers.

Reporter’s note: I’ve known Ed Socha for well over a decade. When I see him, I can envision the young man in his dress whites expecting to attend a church service but immediately turning to fight for his nation. I can envision his bravery and his despair at what he witnessed that day. He is a brave man of honor, of dignity and of integrity. I am proud to call him a friend, and he is a true American hero. He is my hero.

I would encourage all readers to thank him for his service — and certainly “Thank you” is sufficient as words are often difficult to come by. You can do so by e-mailing me and I’ll make certain he receives your messages. E-mail mitch@observernews.net. 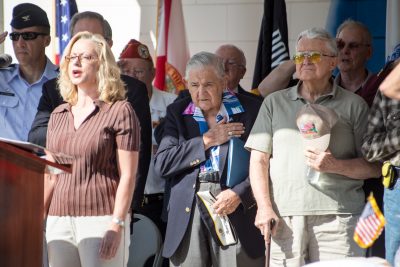 Retired USN Commander Ed Socha of Sun City Center, a Pearl Harbor survivor, was the keynote speaker at a Pearl Harbor Day ceremony in Tampa in 2013. His words stunned the audience into absolute silence. All in attendance were honored by his presence. Today it is likely that he is the only remaining survivor in South Hillsborough.