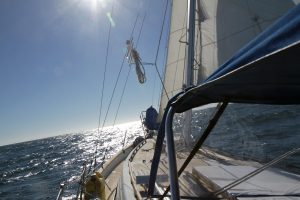 You are on your own on the ocean in a small boat. It is an adventure, beautiful, sometimes terrifying, but always memorable.
MITCH TRAPHAGEN PHOTO

I tried to sleep, but my mind, churning aimlessly, prevented it. My thoughts were swirling like a tornado in a junkyard, the ephemeral detritus of my life and memories colliding in a dark cloud that only I could see.

I tried to focus on something, anything, that could lead to sleep. Suddenly my mind settled on an April night in 2000. I could see my boat shoes as I stood on the deck of my sailboat, Hetty Brace. We were out in the Atlantic, under sail in the night. The ancient light of the stars, some of which have been shining down for millennia longer than humans have been looking up, is enough to illuminate an island the size of Mayaguana.

Mayaguana, the furthest of the Bahamian Out Islands, is a mysterious place. Sailing in is not necessarily difficult, but it isn’t easy, either. It involves running an unseen pass in the protective reef and avoiding shallows and coral heads, ominously black in the clear, shallow water. For those of us who needed six feet of water to remain afloat, that meant anchoring far from the town dock, creating an uncomfortable isolation, something not easily achieved for people in search of just that on small boats sailing the ocean; and it was an odd scene of calm inside the reef while the open Atlantic rolled past, with the wave barrier of the invisible reef keeping it at bay.

The people on the island were very kind. One young man gave us a tour in his pickup truck. There is a lot of “what was” on Mayaguana. There is a former resort, long since shuttered. Building projects that began but were never finished and, perhaps, most eery for inexplicable reasons, was a very tall tower next to what was a large airport that was formerly manned by the U.S. military. The base housed some kind of advanced radar or satellite detection system that has long since gone out of use. The tower stands dark and empty, and much of the huge runway has crumbled, but enough remains for the small private planes that make the flight to the island today.

I noticed that many small boat cruisers reported having a sensation of being watched while anchored off the island. While it is likely there is some form of criminal enterprise here and there, the island is remote and well out into the Atlantic. After all, the people didn’t seem to be the “watching” sort. One explanation I had heard was that fish often emerge from the waters inside the reef — and the sensation of being watched was actually dozens, if not hundreds, of fish, all poking their heads out and looking around.

We had heard of cruisers making their last sail to the island, after hitting a coral head and losing their boats. We heard a lot of things that made Mayaguana, an island with friendly people, sometimes seem like a foreboding place. I have no explanation for that.

On the beach inside the reef was one of nature’s best flea markets. Somehow an enormous quantity of stuff that floats in the ocean winds up on that beach. You could find nearly anything if you were willing to look. But something told us that we probably shouldn’t look too hard; or for too long. One fellow cruiser found a lightbulb. Think about that — it is one of the most delicate objects made, and it somehow survived possibly hundreds of miles of ocean, along with a trip over a reef and through coral heads to land, completely unscathed, on the beach of that island.

Perhaps there is a metaphor for life in that. Perhaps, blessed with good fortune, a lot of us are like that lightbulb.

We were sailing north that night in April 2000 on which my memory landed. We were headed home and our sail up from the Dominican Republic had been uneventful. At least until we passed Mayaguana. I maintained our course a healthy few miles off the reef, but as we neared the island, our navigation lights suddenly went out. I had installed nearly every inch of electrical wiring on that boat myself so I knew where to look for potential problems. One odd issue was that some of the lights were on completely different circuits, yet all went out. After an hour of jiggling wires here and there and checking connections, the lights mysteriously came back on. The island, still somewhat visible by the ancient light of the stars — a dark tropical mass on a dark and empty ocean — was five miles behind us.

The next day dawned bright and beautiful, and we had an enchanting sail into the indescribably clear blue and shallow waters of the Exuma Island chain. Except for a short run out of Nassau and an overnight crossing from the Bahamas Banks to Florida, the deepwater portions of our trip were over. Everything was perfect, and my memory traced back to my thoughts then: That I could sail like this forever. I was a much younger man then; my confidence was high but not overly cocky.

Lying in my bed in 2016, I realized that I was no longer that man. Some confidence, perhaps, had been eroded by life experiences. I have many more years behind me than I have ahead of me now. But I think I just let it slip away. If anything, I should be more confident now — the reality is that I have much less to lose. A fatal mistake back then could have cost possibly 40 years of life, now I’m down to 20-some years.

The sun was shining in a way that it does in memories and in moments of absolute freedom and happiness. I looked out at the water and mentally traced a line out into the open sea, where islands both beautiful and mysterious await. There are no tow trucks, mechanics or hardware stores — out there you have to make do with what you have and with what you can do. It’s an adventure, but life has always been an adventure, although these days it’s easy enough to forget about that.

On this beautiful December morning, I sat in the cockpit of my sailboat and realized that I am still the man that I was. I am no expert or ironman — on more occasions than I could count, I am certain I was saved by the hand of God over my own incompetence — especially on the water. But we are all the best of what we have ever been, regardless of age, if nothing else but in our minds and in our behavior. And then I thought about following the course line in my mind and imagined sailing out of the marina. And that night I slept and dreamed the dreams of a younger man.