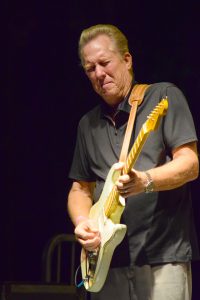 Bradenton’s Blues Festival has been named by Blues411 Radio as the United States’ top blues festival, and the event had already sold out before noon on Saturday, Dec. 3. Performers traveled from all across the country to be a part of the festival including soulful headlining vocalist and guitar player Ronnie Baker Brooks and his band. Other performers who played the main stage on Saturday included the well-known and aptly lauded harmonica player Jason Ricci and pianist Victor Wainwright. The Golden State/Lone Star Revue and Sugar Ray and the Bluetones also took to the stage on Saturday.

Throughout the day, food trucks filled the main entrance while a line of vendors snaked around the main stage. Vendors included local favorite Liz Wilde’s Firestone Gallery as well as Blues Music Magazine, Anna Maria Oyster Bar, Rhythm & Blues Cruise and the Amish Baking Company among many others.

Members and representatives from blues societies across the nation also came together on Saturday to celebrate the blues and connect with each other. According to Mary Ward of the Southwest Florida Blues Society, Saturday’s festival brought together people from blues societies representing 22 different counties. People came from as far away as Pennsylvania, Indiana, Georgia, Idaho and even areas of Canada. She estimated that somewhere between 50 and 70 people from the various blues societies gathered during the Bradenton Blues Fest for a group photo.

“It’s a great venue for blues enthusiasts, that’s why we go every year,” said Ward. She also mentioned that many of the blues societies attending on Saturday support blues education. “They’re not just a group of people saying ‘Hey, we love blues;’ they’re nonprofits promoting blues education.”

The Southwest Florida Blues Society is most active in Lee County, Fla., although they also cover Collier, Charlotte, Hendry and Glades counties. They also have a “blues for vets” program where they work with Cape Coral veterans. The organization is able to get guitars donated to them, and they are able to give vets free instruction for 10 lessons. The goal is for interested veterans to have the opportunity to use blues music as therapy.

Roy and Mary Ward sit on the board of directors for the Southwest Florida Blues Society. Many members of nationwide blues societies attended the Bradenton Blues Festival over the weekend. ANDREA SHAY PHOTO

Liz Wilde stands at her booth with her partner and a variety of handmade goods she sells in her Firestone Gallery in Bradenton’s Village of the Arts. ANDREA SHAY PHOTO

Thousands of visitors to the 5th annual Blues Festival had a variety of food vendors to choose from. ANDREA SHAY PHOTO