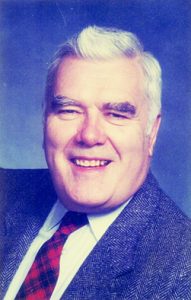 An intimate funeral mass for immediate family has already taken place and a memorial service is being planned in Ann Arbor, Mich. for mid-December.

Jack was born in Cranston, R.I. February 26, 1928, to parents John and Margaret Larkin Baker. An eager student, Jack excelled in his class work and studied at West Point Military Academy,  the Massachusetts Institute of Technology and Northeastern University earning a BSME and MSME in 1949 and 1951 respectively. As a senior student at MIT Jack served breakfast to Winston Churchill, was a member of ROTC, and later became a Captain in the Army Reserve.

Jack is survived by his beloved wife of 32 years, Susan Williams Baker, his children David, Jack (Dianne), Cynthia (Tom), Geoff and Carole, stepsons Michael and Frank Williams, 27 grandchildren and 12 great-grandchildren from his and Susan’s combined families.

He was preceded in death by his sister Judith Ellis, his daughter Pamela Trostle, his stepchildren Katie and George Williams and his first wife Mary Jesson Baker.

Jack was active in civic and community organizations his entire life including serving as a scoutmaster, PTA President, a life member of Rotary, and co-founder of Neighborhood Senior Services with his first wife, Mary. He was nominated for a Community Lifetime Achievement Award from the Geriatrics Center at the University of Michigan in 1999. He was a life member of the Engineering Society of Detroit and the Society of Professional Engineers.

Jack would engage anyone he met in conversation, and family members often heard years later how a story he had shared had resonated with them.  He was a sought-out speaker for engineering professional organizations, and won first place in 2009 in a Toastmaster International speech contest. He always had a yarn to share, accepted everyone for who they were, and had a never-yielding positive outlook, right up to the very end of his life. He will be deeply missed by all who knew and loved him.

In lieu of flowers memorial donations can be made to Neighborhood Senior Services, a program of Catholic Social Services, 4925 Packard, Ann Arbor, MI 48108 or online at http://csswashtenaw.org/seniors/neighborhood-senior-services/. 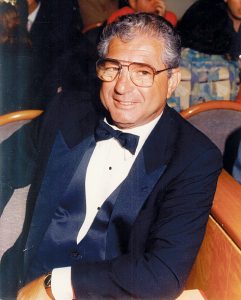 John Amazzo, 85, passed away on Nov. 10, 2016. He was an Army veteran of the Korean conflict and retired from State Farm Insurance as a fraud investigator. 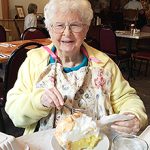 Margaret N. Gutelius, 98, of Sun City Center, Fla., died on November 7, 2016 at the home of her daughter, Mary Gutelius, in Trumansburg, N.Y. She lived a full and giving life.

Margaret grew up in Beirut, Lebanon, the daughter of Presbyterian Missionaries. She attended Oberlin College in Ohio, and graduated from Columbia University in New York City, with a Bachelors in Nursing in 1940. Along with her physician husband, Doctor Stanley K. Gutelius, she worked in rural community health for 31 years.

She lived her faith in a quiet determined fashion. Her family was very proud of her for attending the 1963 March on Washington for civil rights, and then working for fair housing in upstate New York. When Margaret (“Mogs” to her friends) retired to Sun City Center in 1978, she was very active in the St. Andrew Presbyterian Church. She was a member and treasurer for the Interfaith Social Action Council. She worked for the Nearly New Shop and also volunteered at the Beth El Farmworkers Ministry. Mogs loved music and sang in the church choir for 35 years, as well as SCC Woman’s Chorus and St. Andrew and Friends Chorus.

Her family benefitted from her down-to-earth practical talents: She was a superb pie baker, a knitter of beautiful sweaters, and a raiser of Scottish Terriers. She loved boating and was an excellent synchronized swimmer at SCC.

The family will have a private memorial service in the spring in New York State.

Norbert Imhof, 91, passed away Nov. 12, 2016 after a long illness. He is survived by his wife Claire, his son Tim his daughter-in-law Norma, two grandsons, Michael and David and five great-grandchildren.

Norb was a World War II veteran and had been active in community affairs. He had just received his 25 years certificate and pin for the Pinellas Blue Lodge for service in the Masons.

We will miss him greatly.