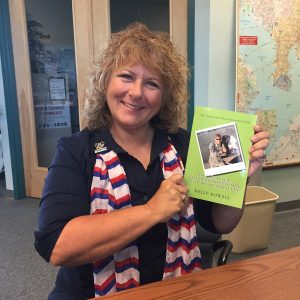 Kelly Kowall, founder and president of My Warrior’s Place in Ruskin, recently published a book about her life since losing her son, Corey, who served in the Army and died in Afghanistan in 2009.

When Kelly Kowall was in junior high school, she wrote a poem from a mother’s point of view about a soldier who had died in the Vietnam War.

“Little did I know that one day I would actually know how that mother felt,” referring to her own son, Corey, who died during a combat mission in Afghanistan Sept. 20, 2009. She will never forget the day three solemn-faced Army officers knocked on the door with news that Cory, 20, had been killed in a vehicle that rolled over after hitting an improvised explosive device.

At the time of his death, Kowall’s marriage was failing. Just five days earlier her husband had e-mailed to say he wanted out.

“I went from burying my son and dealing with divorce proceedings to finding a new place to live and trying to pick up the pieces of what life I had left,” she said.

As part of her healing process, Kowall founded FAVE Boating Expeditions in 2010 to provide a variety of boating trips for veterans, active duty military and families who had lost a fallen warrior.

“As I was doing this I noticed some of the those I was serving seemed to be truly struggling with their grief,” she said. “So I began looking for a program designed to specifically help them deal with their losses. There weren’t any.”

Kowall contacted one of the foremost grief experts at the time, Darcy Sims, of the American Grief Academy and Grief Inc. Sims confirmed what Kowall had already discovered. There were no grief counseling programs specifically for military men and women who had lost a comrade in combat.

“What are you going to do about it,” Sims asked her.

The question led her to open My Warrior’s Place in 2012, a retreat in Ruskin providing respite and support services for veterans or active-duty military grieving over such losses. She also founded the Project Corregidor grief and peer mentoring program.

Two years ago, she added first responders to those who could come to My Warrior’s Place.

“Now I have (guests) coming from all over the country from as far away as Alaska,” Kowall said.

Her story becomes a book

All along people kept telling her to write her story.

“I had so many miracles happen along the way that enabled me to create My Warrior’s Place and its programs,” she said. “I decided to write them all down and put them in a book.”

Kowall self-published My Life After the Death of My Son: A Story of Miracles in August.

“It took me only two months to write, but a year and a half to get it edited,” she grinned.

Every chapter in the book is a miracle story, she said.

Some of the chapter titles sound compelling: “Knock at the Door,” “Bullet in the Sand,” “God Winks,” “Spirit Orbs” and “The Dog Tag.”

“It’s about more than five years of my life, starting from one week before I lost my son through January 2015,” Kowall said. “I’ve already started on book two. The miracles continue to this day.”

My Life After the Death of My Son: A Story of Miracles is $20 and can be ordered on amazon.com or by calling 813-321-0880. Credit card payments are accepted.

All proceeds from the sale of the book go to My Warriors Place.