After nearly four centuries, a tradition of Thanksgiving remains

After nearly four centuries, a tradition of Thanksgiving  remains 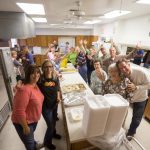 At churches, at businesses throughout South Hillsborough, the spirit of Thanksgiving remains intact with many donating their time for others less fortunate. In many respects it is a uniquely American holiday and rightly so: We have much for which to be thankful.

In Massachusetts, over a three-day period during autumn, 395 years ago, the early settlers of the Plymouth Colony held a feast to celebrate a bountiful harvest. They offered their thanks to God for that which they had received, although there can be little doubt that many were thankful simply to be alive. In addition to the colonists, history suggests that the Wampanoag Indians joined in the feast. It was 1621, and that was considered to be America’s first Thanksgiving, although there is indication that other settlements held similar feasts of thanks as early as 1619.

Over the centuries, what changed from sparse colonies to American states did not change our gratitude. On Oct. 3, 1863, President Lincoln declared the last Thursday in November as a national day of thanksgiving. Decades later, President Franklin Roosevelt slightly altered the date, declaring that Thanksgiving Day would be held on the fourth Thursday of November. That had the effect of often lengthening the Christmas shopping season.

In nearly every respect, Thanksgiving Day is a uniquely American holiday. If nothing else, we give thanks for what we have received with an eye on maximizing what our economy is about to receive. Over the years, even that has changed, with retailers opening earlier and earlier, until stores began opening on Thanksgiving Day itself. And now, in 2016, we find that trend reversing. Even after nearly four centuries, giving thanks remains the priority on Thanksgiving.

And while our generation is reaffirming just that by pressuring retailers to respect both their employees in having a day off, along with the tradition of gratitude, nearly everything else has changed.

There are no exact records of the food served at the first Thanksgiving. Most historians believe that the offerings likely did include some type of fowl, possibly ducks, geese, or swans, along with venison (according to History.com). But certainly not on the tables were the enormous turkeys that are a mainstay today. Despite that, it is unlikely that the colonists or the Native Americans went without over that three-day period. It is probable that the menu also included a healthy selection of seafood, particularly mussels, which were plentiful and easily harvested. The offerings likely also included everything from clams to lobster. There would have been a variety of locally grown vegetables, some of which we no longer consume. At least not like they did — and the reverse is also true. 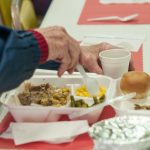 For modern Americans, Thanksgiving just wouldn’t be the same without a mound of mashed potatoes smothered in gravy. Not so for the colonists. Potatoes weren’t all that popular in Europe, and they had yet to make it to America. And while they did eat pumpkins, they didn’t have all of the ingredients to make pumpkin pie, and it would be a century or more before a local grocery store would pop up to offer them.

Fast-forward through the centuries and the United States was forecast to raise 228 million turkeys (2015 data), with 40 million raised in Minnesota alone (meaning turkeys are roughly nine times more populous than humans in that state).

American farmers will grow more than 841 million pounds of cranberries, along with 3 billion (with a “b”) pounds of sweet potatoes. All of which, including all the necessary ingredients to make pumpkin pies, will be available through more than 66,000 grocery stores along with nearly 3,000 fruit and vegetable markets.

According to the U.S. Census Bureau, there are more than 24 million Americans of English ancestry, some of whom could likely trace their lineage back to those who attended that three-day feast 395 years ago. As of 2010, there were 6,500 members of the Wampanoag Indian Tribe, almost half of whom remain in Massachusetts.

Over a three-day period, 395 years ago, the Pilgrims and Native Americans could not possibly have imagined that in the future 319 million Americans would be following in the tradition of thanks that they had set in place. They could not possibly have imagined the bounty that exists today. What they may well have imagined, however, what they would certainly have been grateful for in addition to their own good fortune, is the enduring generosity of the many generations that followed them. In Florida, a place then unimaginably far from Massachusetts, as well as across the rest of this vast nation, on this day of thanks, churches open their doors to those who would otherwise be alone or do without. Private businesses, such as Beanie’s in Ruskin, voluntarily spend their day off donating and preparing the bounty of our nation for others to enjoy. People volunteer to share in good fortune, good company and good cheer with strangers, but still fellow Americans, fellow pilgrims making a way through life. So much has changed but not everything. The most important parts have remained.

And somehow, perhaps deep down inside, they knew. Thanksgiving was not just a day of thanks for what they had received. It was also a time to be thankful for what was yet to come: A nation blessed. And no more so than on Thanksgiving Day.