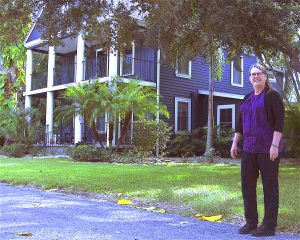 CARL MARIO NUDI PHOTOS
Cathy Slusser stands in front of the home on 29th Street Northwest in Bradenton where the three main women characters of her novels lived.

When Caroline Fogarty lost her husband, Will, in a shipwreck in 1906, she erected a marker in the family graveyard knowing that she would never recover his body.

On the monument in the cemetery on Third Avenue N.W. in Bradenton she had inscribed a verse from the 19th century English poet Felicia Dorothea Hemans’ poem, The Graves of a Household.

This tidbit of fact led local historian Cathy Slusser, to make Caroline, the main character in her final historical novel in her trilogy, From a Heavenly Land: Caroline’s Story, a well-read woman.

“When I saw that (verse on the marker) I thought Caroline must be a reader,” Slusser said.

The mixing of fact and imagination has helped make history come to life in her novels about three early pioneer women in Manatee County.

The Terra Ceia Island resident will give a presentation on her writing and sign books at a reception from 5 p.m. to 6:30 p.m., Nov. 18, at the Manatee Village Historical Park, 1404 Manatee Ave. E., Bradenton. 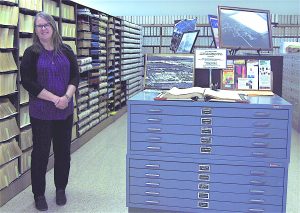 “She indeed was a reader, as was her brother, Emil,” Slusser said.

Caroline died in 1979, so there were several living relatives who remembered her when Slusser was doing the research for her books.

Slusser, director of the historical resources department in the Manatee County Clerk of Circuit Court office, used facts and storytelling to bring history alive in her novels.

And sometimes research validated assumptions of the truth of a story.

Along with the interviews of relatives, her research included reading stacks of public records and newspaper articles.

“Doing the research, I imagined her as a poet,” Slusser said. “I later found a newspaper article saying Caroline gave a talk to a community group, and she read some poems she had written.” 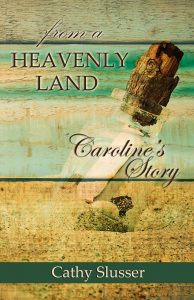 The cover of Cathy Slusser’s final historical novel of her trilogy, From a Heavenly Land: Caroline’s Story.

Bringing history to life has been a life-long desire for the professional historian.

“I believe that history is relevant to our present and our future,” Slusser said. “We can learn from past successes and failures.

“I think it is also important to recognize that the people of the past were human beings and the circumstances that they endured — both tragic and happy — shaped them into the people that they eventually became,” she said.

It was an encouraging Sunday school teacher that set Slusser on her path to make history interesting for the public.

The teacher was not happy with the young middle school student’s reading choices — trashy romance novels — so she gave her student a book by Eugenia Price to read.

Price wrote historical fiction and the novel Slusser was given as a young student was set on St. Simon Island, Ga.

To foster Slusser’s appreciation of history, her parents took the family on vacation to St. Simon Island, and that sealed the deal for her.

She said they went to the graveyard on the island and she saw the names of the people in Price’s novel.

“While standing in the cemetery of Christ Church on St. Simons Island, Ga., I made a vow to one day share the knowledge that history could be alive and exciting,” Slusser wrote on her website. 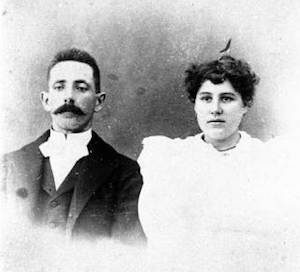 William J. and Caroline Fogarty met at a dance and were married shortly afterwards.

Slusser went on to earn a bachelor’s degree in history from Furman University in Greenville, S.C., and a master’s degree at the University of South Florida.

Having worked in the county’s clerk of the court office since 1984 and supervising five county historical sites, Slusser has sharpened her knowledge of local history.

It was the history of Terra Ceia Island’s first settler family, the Atzeroths, and their perseverance and religious faith that Slusser decided to write about in her trilogy.

In the first novel, From a Heavenly Land: Eliza’s Story, she tells the story of Eliza, a daughter of German immigrants Joseph and Julia. They moved to the island in 1843.

The second novel, From a Heavenly Land: Julia’s Story, reinforces Eliza’s life story through the eyes of her mother.

“My readers wanted to know more about Eliza,” Slusser said.

In From a Heavenly Land: Caroline’s Story, Slusser continued Eliza’s story through the life of her daughter-in-law, Caroline.

“I used Caroline’s story to tell the rest of Eliza’s story from a different perspective,” Slusser said.

Eliza married one of the three Fogarty brothers, William, who established a boatbuilding business and town just west of what is now downtown Bradenton.

Caroline married Eliza and William’s son, Will, after meeting him at a dance. 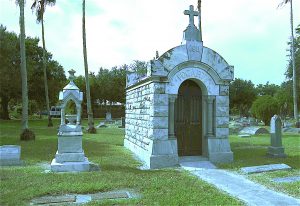 Many of the descendants of the three Fogarty brothers, who founded the town of Fogartyville, are buried in Fogartyville Cemetery on Third Avenue Northwest in Bradenton.

Coming from the metropolitan area of Hoboken, N.J., and moving to the wilderness of underdeveloped Florida was traumatic for the 16-year-old Caroline Lindemeyer, so attending a dance in Bradenton was a big event.

Caroline was 19 when she married Will, and 28 when he died in the shipwreck.

Weaving these and other known facts of Caroline’s life into a captivating and interesting novel was where Slusser used her imagination and knowledge of life in Manatee County in the late 1800s.

Now that the final novel is complete, her success with the trilogy has inspired her to embark on a new project.

“I had a lot of ideas, but what drew me in was to do a story of my great-grandmother and grandmother,” Slusser said.

Her maternal great-grandmother, Henrietta Emily Davis Tichenor, moved from the United States to an island off the coast of Cuba after her husband’s death. John Tichenor had invested in land on the island, and it was the only asset for the widow with five children.

Slusser’s grandmother, Florence Louise Tichenor Pace, had to travel to the island from Terra Haute, Ind., with her younger sister, Mildred, at the age of 12 without their mother. 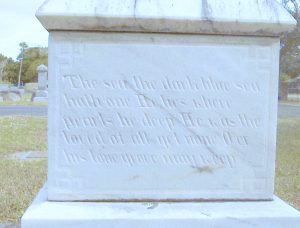 Caroline Fogarty erected a monument with a verse from Felicia Dorothea Hemans’ poem, “The Graves of a Household” in memorial to her husband, Will, after he was lost at sea.

Florence left the island to work in Washington, D.C., when she was in her 20s and eventually married Slusser’s grandfather, Woodie James Pace, who lived near Mulberry, Fla.

The story of these two strong women who managed to make the best of their circumstances was what Slusser found fascinating.

Slusser decided to use a writer’s project on the Internet, National Novel Writing Month (NaNoWriMo), to help her finish her new book.

“The discipline of having to write 1,667 words a day is good,” Slusser said.

“I tend to write slower and better,” she said, “but this forces you to write faster and not necessarily better. This will take a lot more editing.”

For more information about Slusser and her writing, go to her website, cathyslusser.com.

The Graves of a Household

THEY grew in beauty side by side,

They fill’d one home with glee; —

Their graves are sever’d far and wide,

By mount, and stream, and sea.

She had each folded flower in sight —

Where are those dreamers now?

One, ’midst the forests of the West,

By a dark stream is laid —

The Indian knows his place of rest,

The sea, the blue lone sea, hath one —

He lies where pearls lie deep;

He was the loved of all, yet none

O’er his low bed may weep.

One sleeps where Southern vines are driest

Above the noble slain:

He wrapt his colours round his breast

On a blood-red field of Spain.

And one — o’er her the myrtle showers

Its leaves, by soft winds fann’d;

The last of that bright band.

And parted thus they rest, who play’d

Beneath the same green tree;

Whose voices mingled as they pray’d

Around one parent knee;

They that with smiles lit up the hall,

And cheer’d with song the hearth! —

Alas, for love! if thou wert all.

And naught beyond, O Earth!