The public in public transit

The public in public transit 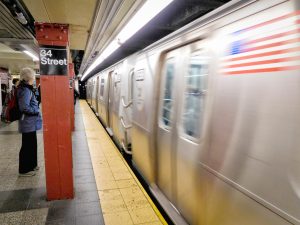 New York City could not exist without public transportation. More than 6 million people each day ride the subway system. Although the Tampa Bay area doesn’t have the population density for such a system, it certainly has the public part down. It’s the public that puts the interest in public transit. Occasionally, too interesting.

It has probably been a decade or two since anyone called her cute. But she was wearing a pink baseball hat with a ponytail out the end in the cute way that some women do. The train was crowded; I was jammed in next to her and needed to put my cell phone into the holster on my hip. I tried to squeeze over enough so that she didn’t think I was trying to secretly grope her. She did look down to make certain.

The train was delayed somewhere under Times Square in Manhattan, so there wasn’t the normal track noise and squeals from the wheels. The young man sitting on the other side of her gave up on waiting and another man, this one about her age, sat down next to her. Almost immediately, they were conversing like old friends. I’d never really noticed that before on the increasingly crowded subways under the city. But the relative quiet provided a different perspective.

The train started moving again, and the man got off at Lincoln Center. As he made his way to the sliding train doors, he turned back to look at the woman, they locked eyes and waved. Decades vanished.

His seat was then taken by a very attractive and professionally dressed young woman, listening to music through her iPhone earbuds. Something made the older woman next to me curious, and she gently tapped the young woman on the shoulder. Before long, they, too, were talking like old friends. She had apparently asked about some sort of skin cream because the young woman reached into her purse, pulled out a mostly used tube of expensive-looking stuff and offered to dab some on the older woman’s hands. They kept talking as she rubbed it into her hands, stopping occasionally to inhale the fresh fragrance.

Our stop on the Upper West Side was next. I walked off the train and turned to see the two women — one young, one older, just moments ago complete strangers — enjoying their conversation.

On the way home that night, we rode the subway all the way down to the World Trade Center and then took the train under the Hudson River and back to Jersey City.

We rode the escalators back to the street level and while Michelle ran into a drugstore for a quick purchase, I lingered outside enjoying the night air. A man in a football jersey approached me and asked for something. I’m hearing-impaired and didn’t understand him. Although he didn’t appear homeless, I assumed that he was asking for money. I reached into my pocket and pulled out all of the change I had: 22 cents.

He said, “Thanks for trying.” And then he grabbed my face and kissed me on the cheek. Now that doesn’t happen every day — not even in the New York City area.

Although taken aback, I had to laugh. I asked him, “What do you need?”

I pulled a couple of bills from my wallet, enough for bus fare.

While these things don’t happen every day, on every ride, more often than not there is some sort of personal connection made or offered with strangers on the buses and city trains. Sometimes the subway cars are so crowded there is almost no choice but to get up close and personal with a stranger.

The Tampa Bay area is unlikely to ever have such a system. The population density in New York is many times that of the Tampa Bay area. While I personally believe that light rail, such as has been implemented by areas the size of  the Tampa Bay area, would be a draw, especially among the millenial population. Light rail would have to be coordinated with significant changes in other forms of public transit. There is no point in having a train station that leaves passengers in places they do not want to be with no means of getting anywhere else. The Tampa Bay area also has a unique challenge in that a big ol’ bay sits smack dab in the middle of the metro. Overcoming the challenges of the bay, the sprawl and the enormous cost would be no small feat. Unfortunately, mass transit can never directly support itself financially, but neither can I-75. The region, however, would certainly suffer without I-75.

As such, I was happy to see the inauguration of the Cross Bay Ferry this month. The structural and infrastructure challenges remain for this form of transit as well, but perhaps it is a first step; certainly one easier to implement than laying tracks and building train stations.

I do wish the tens of thousands of people sitting in traffic on the bay area freeways could have the opportunity to actually see and hear some of the people with whom they live, as is possible on the subway. I think it makes for a tighter knit community. And, while occasionally frustrating, it can also be entertaining. I know that if there were a train from South Hillsborough to Ybor or downtown, I’d certainly go to Ybor and downtown more often.

I’ll never see the woman in the pink baseball cap again. I doubt (um…hope?) that I won’t get a kiss on the cheek from a strange guy again. But both of those people added just a bit of color to my life. Both were the result of something in which I wasn’t sitting alone in my car in an I-4 traffic jam.

On the freeways, it can be a dog-eat-dog world. On the train, everyone is pretty much all in it together. In the end, everyone really just wants to get home.