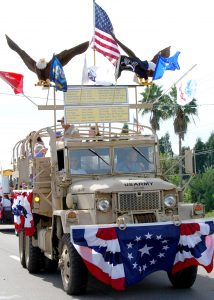 Fourteen military and JROTC groups will be among 65 organizations participating Nov. 12 in this year’s Ruskin VFW Veterans Day Parade. The procession starts at 11 a.m. at Shell Point Road and U.S. 41.
LOIS KINDLE PHOTOS

Nov. 12 will be a day of celebration in Ruskin as thousands of South Shore residents gather for the community’s annual Veterans Day Parade. Hosted by Ruskin VFW Post 6287, the procession will honor all those who served in the U. S. military.

“We participate annually and always look forward to it,” said Melanie Rimes, executive director of the SouthShore Chamber of Commerce. “Personally, it’s my favorite day of the year. And this year, for the first time, our military affairs committee took on designing our float.”

Coast Guard veteran Lou Card will lead the parade as its grand marshal. Card, 92, served during World War II aboard the USS Wakefield from 1943 to 1946. He and a group of other World War II veterans were members of a recent Honor Flight to visit the war memorials in Washington, D.C. 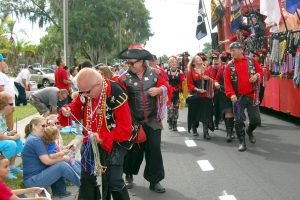 Pirates and wenches of Ye Notorious Krewe of the Peg Leg Pirate will hand out hundreds of beads in the upcoming Ruskin VFW Veteran’s Day Parade. Other krewes marching in the parade this year will include the Tampa Rough Riders, Ye Royal Krewe of Charlotte de Berry, Krewe of the South Shore Marauders, Krewe of Sea SaveYours and Krewe of the USA.

Buccaneers and wenches from the Tampa Rough Riders, Ye Royal Krewe of Charlotte de Berry, Krewe of the South Shore Marauders, Krewe of Sea SaveYours, Ye Notorious Krewe of the Peg Leg Pirate and Krewe of the USA will interact with the crowd as they walk beside their pirate ships.

Jed Lewis, Katherine Verrando, Speyer Heerdt and Mercedes Harris will ride in a convertible to honor them for writing this year’s winning essays in the post’s 2016 Buddy Poppy King and Queen Contest. Named king, queen, prince and princess, respectively, the fourth-graders will read their essays on “What Veteran’s Day Means to Me” at the post after the parade. About 80 essays were submitted by area students in grades 3 through 5, McBride said.

This year’s route has been shortened a bit due to some ongoing repair work of the Second Avenue bridge. Instead of starting at Fourth Street Southeast as it has in the past, the parade will begin sharply at 11 a.m. at Shell Point Road and end just shy of 19th Avenue Northeast at the entrance to the old Kmart parking lot.

Many in the community look forward to the annual procession.

“The post had a spaghetti dinner on Oct. 17 that was attended by 300 people, and everyone was asking about the parade,” said Lois McBride, who co-organized the event with Tony Zipperer. “We’re expecting a large crowd this year.”

Thousands of people turn out every year to cheer on the participants. Many in the crowd salute as members representing military organizations pass. 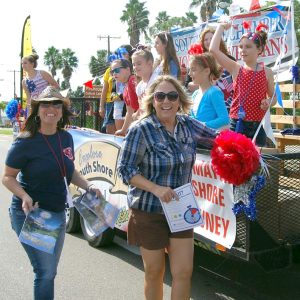 Melanie Rimes, left, and Leslie Bennett, of the SouthShore Chamber of Commerce, walk alongside the chamber’s float during the 2015 Ruskin VFW Veteran’s Day Parade.

“I think it’s important for us to pay tribute to our veterans for the sacrifices they and their families made to protect our freedom,” McBride said. “The parade is our way to do that and give something back to the community.”

“They like seeing all the pirates, who give out lots of candy and beads,” she said. “And others in the parade also throw beads and candy. The adults and seniors seem to enjoy that, too.”

Around 1 p.m., the VFW will host an after-parade barbecue event for the community at 5120 U.S. 41 N., Ruskin, where they will hand out the awards and provide free entertainment and a low-cost lunch. This year, for $5 per person, the meal will include BBQ beef or chicken, potato salad and baked beans.

In deference to families, smoking will not be allowed inside the post until after 5 p.m.