Memories of Florida in November

Memories of Florida in November 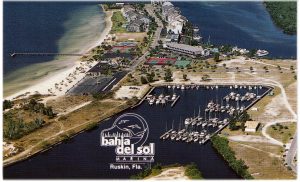 A postcard from the past: What was in 1994 known as Bahia Del Sol Marina. Things were a little different without the condos and resort.

It took some serious effort to slow and quiet my mind down to the point of remembering. But in my mind, I walked down a nebulous staircase back to 1994. Thanksgiving Day, to be precise. Things were different then. Life was different. The Gulf Coast of Florida was significantly different. Since the day of my birth on Thanksgiving Day in 1962, and a few odd years while my Dad was earning his Master’s Degree, that was Michelle’s and my first away from our families in Minnesota.

But we had a different sort of family in Florida. Michelle and I were living on our boats in a little marina in Ft. Myers Beach. We knew most everyone in the marina, but only by either their first name or by their boat name. At least a few people there likely had specific reasons for not sharing their full names.

They were a colorful group. One man, who bore a striking resemblance to a young Charles Manson, would occasionally trip on LSD and stretch out for a nap in the middle of the heavily traveled two-lane road that provided the only means for getting on or off the island. Others would drink and get into shouting matches, which, for reasons entirely unknown would invariably end with one person or another threatening to blow up the marina. 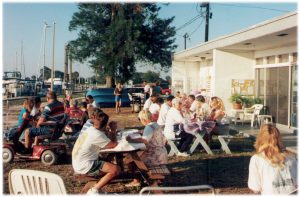 Almost anything provided reason enough for a party among those living aboard their boats in Ruskin. This building no longer exists.
MITCH TRAPHAGEN PHOTO

The marina, somehow, remained intact and unblown up. The people at their core were good and decent, and fights were always forgotten the next day. It felt as though we were living in a Carl Hiaasen novel and, to be honest, it was kind of fun. It was certainly an interesting introduction to Florida.

Having reached the desired landing of the stairs in my memory, I recalled that together, the boaters made up a Thanksgiving feast, complete with a frighteningly undercooked turkey from a retired fireman on a houseboat who had nearly caused the turkey to explode (not intentionally). But nothing blew up that day. In my mind, I can hear the voices, see the faces and even hear the music that was playing from the stereo on a nearby boat. I can’t quite name the songs, but it was the music of 1994 or earlier. All of that helps me to feel, now 22 years later, what it felt like then, when I was a much younger man on an insane adventure, giving up career and promise for a life in Florida on a sailboat. And to be certain, Thanksgiving 1994 indeed has its own landing in my mind’s stairway to the past.

Afterwards, Michelle and I prepared our boats to sail to Ruskin early the following morning. Ft. Myers Beach was no place for us to find the jobs we needed.

We sailed around Sanibel Island, a place that had meant a great deal to me personally and, later, to the both of us. Sanibel was (and still remains) within my definition of paradise. It is a beautiful and calm place, at least for the occasional visitor that I was. And then we steered north. 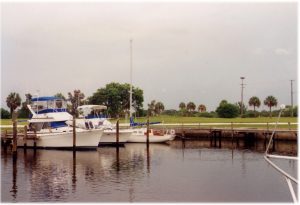 Things were a little quieter in Ruskin back in 1994. Boats, including Michelle’s sailboat, at what was then Bahia Del Sol Marina. Where the palm trees once stood are now condos. Change is inevitable and it isn’t all bad. Life would get boring without it.
MITCH TRAPHAGEN PHOTO

Since we were each single-handing our own sailboats, we decided to stop at night. We spent one in a marina at Boca Grande. We walked around the small town and were struck by the friendliness of the people. The memory of a woman we’d met remains fixed in my mind as she gushingly told us her story and how, since moving to the island town, she had become “Boca Nuts.” If I could draw, I’m certain I could still draw her precisely.

The next night, after a day of sailing and repeated calls to Michelle over the VHF radio to ask if she had decided to sail to Mexico instead, was spent uncomfortably off Egmont Key. And then the following day, we sailed into Bahia Del Sol Marina where we were told that the two slips we had reserved a few weeks prior were no longer available. It didn’t really much matter — those were quiet days —  no one had heard of Ruskin and other slips were available.

The marinas at Bahia Beach were lively places in those days. The Captain’s Quarters, at what is now Little Harbor Resort, would have been well categorized as a dive bar, unlike its much cleaner incarnation today. And while we adjusted to the fact that, unlike our marina in Ft. Myers Beach, there were many more retired people in Ruskin and the surrounding area, likely few of whom were taking LSD or plotting to blow up the marina, we quickly discovered that colorful characters come in all ages. 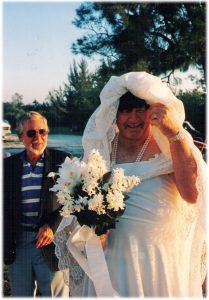 In Ruskin, we learned that colorful characters come in all ages. In the ’90s, the marina threw a mock-wedding party for Michelle and me. Not shown in the photo: Bill, the man standing behind Bob the Bride, is holding a rifle. Both were wonderful friends.

There were no condos fronting the marina in those days — just grass and scrub palms. In fact, there were few condos in Ruskin at all back then. Who needed a condo when a one-bedroom house west of U.S 41, only a block off Shell Point Road could be had for $25,000?

And then, living in a major Florida metropolitan area, I could see that Carl Hiaasen’s many whacky Florida novels were only barely fiction. In Florida, reality could be far stranger than fiction. And that wasn’t due to the natives — just look at a map and it’s easy to see where the road ends; and for many of life’s more colorful characters it ended right here. No doubt Hiaasen himself, while seeing potential fodder for stories come through at the Miami Herald, had to stop and consider that there would be no way a reader in Nebraska would ever possibly believe this or that could actually happen.

And then the Gulf Coast was discovered. Bulldozers re-shaped the neighborhoods and towns and things changed. The weird became normal and normal turned into capital gains.

But now a decade on, it is apparent that while appearances change, the names of the people and the boats in life may change, the soul tends to remain the same. Living in Florida is still an adventure, and every day brings the potential for something new; even, perhaps, something too bizarre for those in Nebraska to believe. Change isn’t always the worst thing. I sincerely hope that the Charles Manson look-alike has walked away from psychedelic drugs and is no longer stretching out in the middle of busy streets for afternoon naps. An additional 5 million people have moved to Florida since then, and not all of them may know to swerve around the guy in the road at certain times of the day. I hope the retired fireman is still around and hasn’t blown up any turkeys (or marinas), and I hope the guy living in the derelict RV in the parking lot (that is now a Publix) no longer keeps his underwear in his oven. 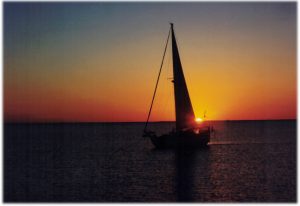 Another beautiful sunset in Florida. Except that was a friend who had run aground, as many would, attempting to get into Bahia Del Sol Marina.

Walking up a few steps in my memory, and just for the record, if you hear of someone getting arrested for animal cruelty for leaving a baby pig in the backseat of a car while running into a convenience store, it’s not all that weird. Okay, well it is weird because she was driving the pig around the neighborhood placing him on street corners hoping to lure out her boyfriend’s missing boa constrictor. But it’s really not that weird because it has already happened; and in my memory I can still hear the radio news announcer struggle to get through the story (the piglet came through okay). It happened on my first day in Ruskin, three days after Thanksgiving in 1994.