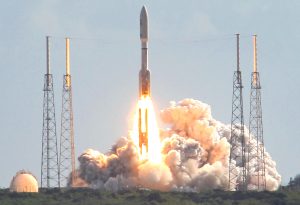 The Mars Curiosity rover launches from NASA’s Kennedy Space Center in Florida. There are many heroes in this great nation, and some of them sit in front of a computer. Others stop to help save the life of a child on I-75 in Gibsonton. This is truly a great nation and our good stories are still being written.
Mitch Traphagen Photo

Jack Garman died on Tuesday, Sept. 20, at the age of 72. In the annals of history, he will remain a young man of intelligence and firm conviction. In many ways, he was the ultimate American and the personification of America itself. He was quick thinking, confident and he made history happen.

Mr. Garman was a 24-year-old computer programmer working for NASA in 1969 during America’s first attempt to land men on the moon. It was a frontier, but like nothing humanity had ever encountered — the frontier was 240,000 miles away, and there was no ship capable of mounting a rescue should one be needed. It was people like Mr. Garman who dedicated their lives to ensuring that one would not be needed.

On July 20, 1969, the lunar module, Eagle, from the Apollo 11 mission had separated from the command ship Columbia and began its historic descent to the surface of the moon. There was no way to do a real practice run — humanity had never been this far away before. There were no certainties.

Adding to that, shortly after Eagle began its descent, an alarm went off on the control board indicating a computer problem. And then it went off again. In most respects the computers inside of an iPhone today are more powerful than the computers onboard that space ship, but they were still needed for guidance. Landing on the moon is not like backing into a parking space.

Mr. Garman, at an age when most people are still trying to figure out what to do when they grow up, had prepared himself for this contingency. He had effectively memorized every possible error and what they could mean for the mission and lives aboard Eagle.

Without the computers, the mission could well have ended in a horrific failure. The loss of lives of the brave men aboard would have been staggering. The impact of the entire world watching it may well have set space exploration back by decades, if not longer. There were only seconds to spare, and mission command had to make an instant, irrevocable decision.

In the end, that decision effectively fell to 24-year-old Jack Garman, the programmer. In looking at the data coming in from a quarter of a million miles away, he surmised that the computers were functioning; they were just overwhelmed with data that no one had ever seen before. He practiced it, he determined that the computers would process the important stuff first and handle all else later.

He had to make that determination in a fraction of a second. Life or death, even the future of the space program, in the balance — it was a decision of no return.

A few moments later, over the loudspeaker system, astronaut Neil Armstrong’s voice was heard calmly stating, “The Eagle has landed.” They had only 30 seconds of descent fuel remaining. It was an achievement that no other nation in the world has yet matched.

Seeing the news today, reading reports of how polarized the American public has become, seeing reports of shootings, anger, frustration and near madness, I have to wonder if this nation is still producing people like Jack Garman. Just imagine the responsibility on that young man’s shoulders and yet he came through. He was the very image of the very best of America. And he remained with NASA until his retirement in 2000.

Where are you Jack Garman? The world needs you — quiet, unassuming, yet confident and competent. Someone strong enough to carry the world on his or her shoulders.

As I watch television news and read national media, it seems the nation is splitting apart into a politically apocalyptic battle in which there will be no winner, nor a return to sanity and decency. We will simply all lose, because regardless of the outcome, half of all Americans will hate the result.

There were similar reports of polarization before the 2004 election, so I decided to ride a motorcycle around the country to see if that was really true. It wasn’t. I met hundreds of people on that trip, and never once did I see neighbors brawling in the streets. In fact, I don’t recall politics or the coming election ever being brought up in conversation.

But things seem different this year. I’ve found it discouraging that this great nation could be so tied up, rendered so impotent that Americans are choosing to hate Americans over ideology when the reality is that 99 percent of our ideology is shared among us.

I believe we can all agree that Jack Garman and the astronauts and the men and women like them represent the very ideal of all that is good about America. But where are they now?

And then last month I read the news of a rollover accident on I-75 near Gibsonton. A tire exploded causing a SUV to land upside down in the median. People stopped to help, rescuing the driver and one child. But there was another child — her arm was sticking out from underneath the vehicle. Those who stopped attempted to push the SUV over to get it off of the child. But it was too big. And then more people stopped. And then more. Before long, 50 people were there, all strangers, from all walks of life and all political persuasions, were working together to save the life of a child. Working together, they rolled the SUV off of her and then held it there, waiting for emergency responders to take her to safety.

Jack Garman was an unassuming American hero. Somehow I have to think that he was smiling at the 50 or so people who had, quietly, unassumingly, joined him in that rank.

I don’t necessarily believe all that I read or see on the nightly news. I have faith that we will retain our cohesive American fabric. We will always have differences; and we will work through them … just as we’ve done for 240 years.

There is still good stuff to write about. The United States of America remains a great nation. Fifty of our neighbors proved that in Gibsonton last month.