He approached me as I was leaving the laundromat in Ruskin. He apparently assumed that he had only seconds to speak before I’d ignore him and drive away, so he spoke quickly. From him I heard, “I know people don’t like homeless people, but I’m not a drunk and I don’t do drugs…” And then I heard something about his wife passing away.

Is that really true? Do Americans not like homeless people? 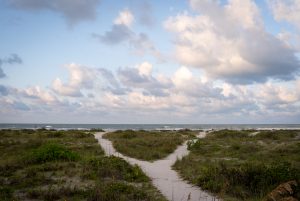 There are different paths to choose from in life, although sometimes it seems the choice is not always our own. But in the end, rich or poor, I believe the paths all lead to the same place.
MITCH TRAPHAGEN PHOTO

I told the man that I didn’t dislike him at all, but I’m hearing-impaired and couldn’t understand much of what he was saying. In retrospect, perhaps it was more than simply my hearing that caused me to not understand. I’ve never been homeless.

In the New York City area there are advertisements asking people not to give money to panhandlers; instead, the advertisements suggest giving that money to any number of charities that can then use those funds to help the people asking for help.

There is a certain logic to that, of course. There is the “give a man a fish or teach a man to fish” concept; and there certainly are swindlers out there, but my take on it is if someone has been so reduced in self-esteem to ask strangers for money (and if they appear to really need it), I’ll hand some over. Beyond those surface criteria, it’s not my job to judge them, and if a fellow human says they need help, I’ll do what little I can.

Walking through the opulent, increasingly ostentatious wealth of Manhattan, encountering the homeless in need is a daily experience. I can’t afford to give to everyone who asks, so I tend to choose one. It’s the best I can do.

Back in Ruskin, in addition to the man’s opening statement, “I know people don’t like homeless people…,” I was struck by his choice of location to ask for help. I think it’s a safe bet to say that the wealthier among us generally don’t go to laundromats — they have their own washers and dryers. But I guess it’s all a matter of degree. I had a car and an armload of clean clothes. I am wealthy in comparison.

Regardless, his words and, perhaps, his predicament, along with a truly horrific 2016 election season, all raise a broadened version of the question asked a few paragraphs above: Who are we as Americans? What kind of people are Americans?

Suddenly I’m realizing this may not be the America that Mr. Fuerst taught us about in 7th grade social studies (besides the fact that he told us to not stress out about the nuclear attack drills we had in school; the Soviets would never invade us because so many people have guns and they’d be shot at from every corner).

American sentiment about things political ebbs and flows. American politics is as diverse as we are as a nation and a populace. I believe in the collective mind and conscience of America; perhaps where we are today is a product of our times.

No man or woman is an island — we’re Americans. And, as a believer in American Exceptionalism, I also believe that, by and large, we are still the rugged individualists who innately assume responsibility for ourselves. But we are also a generous and caring nation, in that we keep an eye out for our neighbors, often even those who are on distant parts of the planet. When help is needed, as a society or even a neighborhood, we tend to turn out. In other words, we’re not entirely strict individualists because we’re not really alone. We have built communities in which people feel a sense of pride and a sense of responsibility for others.

In that sense, consider one of our neighbors: USN retired Cmdr. Ed Socha. Before he joined the U.S. Navy and dedicated his life to the service of this nation, he was on his own to survive during the Great Depression. He was never technically homeless; he did what he had to do and found work from a farmer for mere pennies a day, and that arrangement included lodging on the farmer’s outdoor porch. I would doubt that’s still possible today.

The man who approached me as I was leaving the laundromat didn’t strike me as a swindler, a drunk or a drug addict. He struck me as a man, and a middle-aged American, struggling to get by in one of the few ways that appeared available to him. From him, I did not sense laziness — quite the contrary. But I did sense defeat.

What many thought of as Columbus Day was also World Homeless Day. It is estimated that more than a half million Americans live either on the streets or in shelters on any given night. In the entire world, many tens of millions are homeless.

Florida is the world’s vacationland and, as a result, it is understandable that the state simply cannot have the same social safety net that some northern states offer. Being homeless on the beach would, on the surface, seem to be better than being homeless in Chicago or Minneapolis in January. Not that anywhere is a good place to be homeless. That said, Florida is actively working to reduce the problem, and to solve problems. According to the National Alliance to End Homelessness, homelessness in Florida decreased by nearly 14 percent between 2014 and 2015. Florida’s largest success was in reducing the population of homeless families, which fell by 33 percent during the same time period.

I pulled a couple of bills out of my wallet and handed them to the man and said, “I hope it helps.”  I tried to offer empathy over sympathy; he still had dignity. He said something in response that I could not hear, and thus could not understand. And but for the grace of God, perhaps I never really will.

For more information about the National Alliance to End Homelessness, visit endhomelessness.org.