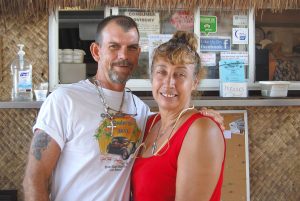 The Dog House and More owners, Scott Curtis and Lisa Csiki, work together at their mobile food truck, he as the pitmaster and she as the head cook. The couple are engaged but have not set a date. The Dog House and More is actually a mobile food truck set up at the corner of U.S. 41 and First Avenue Northwest. Its owners say they make “gourmet fast food,” prepared to order daily. Dining is outdoors under cover. LOIS KINDLE PHOTOS

Lisa Csiki had never been in the restaurant business when she opened a food truck back in Chaplin, Conn., in 1999.

“There was no place to get a hot dog or ice cream within five miles,” she said. “So I set up shop in front of my house along Route 6. That’s how I got started.”

Seven years and a divorce later, Csiki closed her business, left Connecticut and began traveling around the country. She eventually landed in the Tampa area and worked as a kitchen manager and cook for several years.

By 2011, the call of owning her own business led her to open The Dog House and More on Shell Point Road in Ruskin. Within a year, she was joined by Scott Curtis, who became her fiancé and, this year, the restaurant’s co-owner.

On Aug. 4 the couple purchased property at 106 U.S. 41 N. in Ruskin, the site that was occupied over the years by Paramount Pools, Ruskin Inlet Café and A&W Root Beer. The Dog House and More re-opened at its new home Sept. 27. 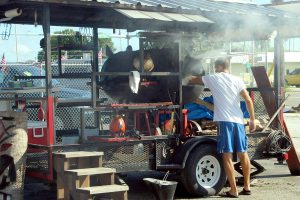 Scott Curtis, co-owner of The Dog House and More, is the pitmaster for the restaurant’s smoked ribs, chicken and pork.

“We were leasing the land on Shell Point Road and wanted more exposure,” Csiki said. “We now have more than half an acre, higher visibility and plenty of room to continue our monthly Cool Car Cruise-Ins from October through April.”

The car shows take place the first Saturday of the month from 12:30 to 3:30 p.m. They’re open to anyone with a classic, antique or custom car, hot rod or truck, and they feature giveaways, prizes and trivia. DJ Tiny plays all the oldies.

The Dog House and More has won numerous awards, including TripAdvisor’s Certificate of Excellence for the past three years. The popular eatery, with its outdoor seating and expansive menu of freshly made foods, has been fully embraced by locals. 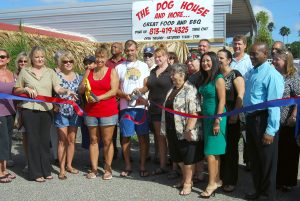 Members of the SouthShore and Sun City Center chambers of commerce gather Oct. 4 for a ribbon-cutting ceremony to celebrate The Dog House and More’s recent move from Shell Point Road to U.S. 41.

“We’ve been blessed to be supported by the community,” Curtis said. “We have customers who now feel like family. We’re on a first-name basis with all our regulars.”

“We know what they like and most of the time what they’re going to order,” Csiki said.

Customers seem to enjoy both the food and familiarity.

“Everything we’ve had there is great,” said Ron Simpson, of Apollo Beach, a frequent diner who comes with his wife Phyllis. “We’ve had all of the BBQ products, love the lobster rolls and enjoy the burgers and hot dogs. The sides are also excellent.”

“The food and service are wonderful,” she said, adding they have frequented the eatery at least once a week for the past 18 months. “We especially like the brisket and boneless rib sandwiches.” 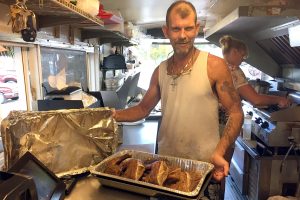 The menu features something for just about every palate. Whether you’re into chili dogs, freshly prepared burgers, BBQ sandwiches and subs or slow-smoked ribs and chicken, pulled pork and beef brisket, there are plenty of options for meat lovers.

“We make everything we serve except our National Deli, all-beef hot dogs,” Csiki said. “Our seafood is brought in fresh, two times a week, and we offer it blackened, grilled or fried. Our meat is smoked on site at the Pig Pit. We even make our homemade mango salsa and seven-cheese mac ’n’ cheese. 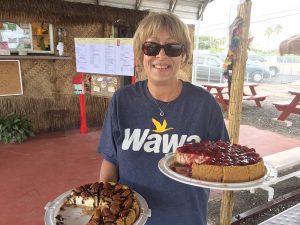 Csiki’s sister, Sheryl Juhasz, makes a mean cheesecake, several varieties in fact. And of course there’s ice cream with all kinds of toppings.

“We like to say we make gourmet fast food,” Csiki said. Everything is made to order every single day.”

The Dog House and More is open Tuesday through Saturday from 11 a.m. to 7 p.m. Most major credit cards are accepted. 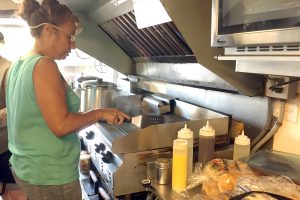 The Dog House and More’s founder, Lisa Csiki, started her first mobile eatery in front of her home on Route 6 in Connecticut. Here she heats sliced beef brisket for an early customer’s sandwich order.