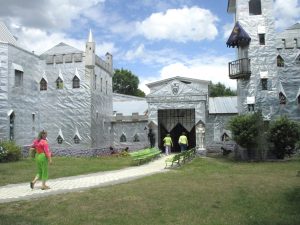 Howard Solomon said he never intended for his dream home in Ona, Fla., to become an attraction. He called the complex that includes the castle, Alamo replica, car museum, workshop and restaurant “a hobby that got out of hand.”
BILL HODGES PHOTOS

We lost a talented, creative man this summer, but Howard Solomon left a great legacy that is enjoyed by thousands every year. Solomon’s Castle in Ona, Fla., after being closed for the summer, opened for the season in October and will continue to be run by family members. If you want a day trip offering several fun-filled hours of smiles and chuckles, this amazing destination delivers.

Your senses go into overdrive touring the 16th century castle replica with its galleries filled with Solomon’s humorous art creations, upstairs living quarters, and the Blue Moon Room, a 500-square-foot efficiency apartment (available by reservation). The “Boat in the Moat” restaurant is a “don’t miss” part of the visit. It is indeed a ship built in a deep ravine where Chef Alane, Solomon’s daughter, creates scrumptious homemade dishes you can enjoy in the dining rooms or outside under the giant oak trees. By the moat is their Lily Light lighthouse complete with stained glass windows and adjacent pavilion. Walking trails and picnic tables complete the serene woodland setting. 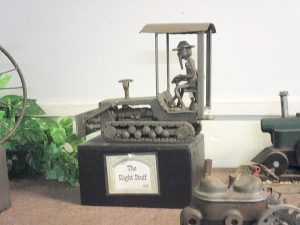 Solomon’s wit is infused in each of the countless whimsical art pieces on display. The Right Stuff represents Don Quixote going back to the windmill better prepared to fight it with a bulldozer.

Also on the property is an antique car museum that includes two cars Solomon was especially proud of — a 1915 ford Model T Speedster and a 1925 Ford Model T. The museum is not accessible on the individual tours, but groups can make prior arrangements for it to be included on their visit.

An Alamo replica is also on the castle grounds. Solomon’s story was that he built his own Alamo because he couldn’t find a parking space near the San Antonio structure so didn’t get to see it.

Some insight into the creator helps to fully appreciate the remarkable ingenuity everywhere you look. Solomon used stuff that others throw out to create art pieces and to incorporate into his buildings. Even the castle walls are still readable news printing plates with news from years gone by. He attributed his inspiration to “the junk,” saying it talked to him with an idea on how to reuse it. He was quoted as saying, “My mind goes and goes but doesn’t always come back.” The guides reflect many of Solomon’s quips, sprinkling anecdotes into their narration and preceding remarks with, “Howard said…” 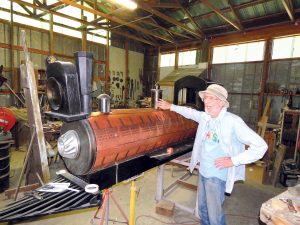 Earlier this year was his last major project. Howard Solomon quipped that this train was going on a trip — all the way across the yard. Note the jello mold and pie pan on front.

For Solomon, the castle and everything associated with it was a labor of love; 14-hour days were the norm for most of his life. As recent as this spring, at 81, he was still working several hours a day. This self-taught sculptor, painter, artist and author was originally from Rochester, N.Y. During his career, he had galleries in Freeport, Bahamas and Miami, Fla. and engaged in a multitude of trades to hone his skills.

All who knew him said he was always an artist and craftsman with a quick mind and keen sense of humor. On display in the castle is a little wood truck that was his first creation. At age 4, so the story goes, his mom gave him a razor blade and block of wood and said, “Go play.” Another childhood anecdote: When Solmon was age 7, his dad gave him a lathe, and Solomon made a bowl, calling it a “square without corners.” Solomon loved antique tools. There is one area which the guide explains is Solomon’s “plain” wall; it is covered with wood planes. 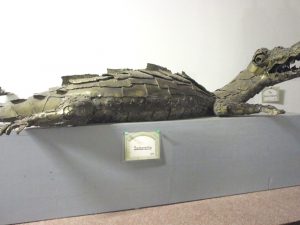 Solomon used discarded materials for his art. He always said that junk “talked to him and gave him an idea on how to reuse it.” He called this one Samsonite, saying its “mother used to be luggage.”

This all started when Solomon was 47 and found 40 acres in Ona, Fla., an area that was just woodlands, farm land, cattle and orange groves. He bought the land for $350 an acre “because it “was cheap and he was too.” With his out-of-the box thinking, he envisioned building a castle that would be his home—his dream of paradise. He purchased adjacent land as it became available, and now family members live in the five houses on the 90-acre property and run the business.

Solomon’s Castle is open October through June, 11 a.m. to 4 p.m. Closed Mondays. Cost for adults $12.50; for children 12 and under, $5. For more information, visit solomonscastle.com.