Reef and beach clean up

to hold reef and beach clean up 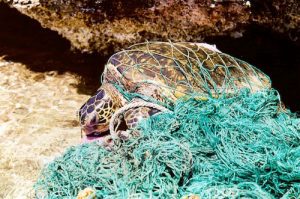 NOAA MARINE DEBRIS PROGRAM PHOTO
Marine debris can entangle and harm marine organisms. For air-breathing animals, such as the green sea turtle, entanglement in debris can prevent them from being able to swim to the surface, causing them to drown.

The National Oceanic and Atmospheric Administration has reported that marine debris in the Gulf of Mexico ranges from small pieces of litter, such as cigarette butts and plastic bottles, to large derelict vessels.

On Saturday, Oct. 8, a local group will be doing their part in cleaning up some of the mess.

Suncoast Aqua Ventures, a newly formed nonprofit, has organized the Suncoast Reef and Beach Clean Up.

To encourage others to join them, Suncoast Aqua Ventures co-chair Troy Brown said the event will have a twist.

“This is the first time a clean up will be a competition,” Brown said. “It’ll be very similar to a fishing tournament.”

Also, the participants will not only be cleaning up the shoreline, but some of the diving enthusiasts will be underwater hauling in debris and trash. 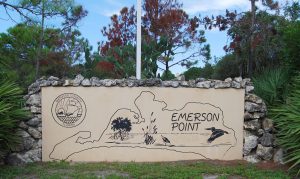 CARL MARIO NUDI PHOTO
The Suncoast Aqua Ventures nonprofit organization will sponsor the Suncoast Reef and Beach Clean Up on Oct. 8, along shorelines and offshore throughout Manatee and Sarasota counties.

And just as in fishing tournaments, there will be cash prizes. The five categories will be most anchors found, most metal recyclables, most unique item, most nonmetal recyclables, and most tackle, nets and fishing line.

After a recent dive, the idea of expanding the clean up to the waters offshore came to Brown, who has been a SCUBA diver for more than 40 years.

“I was SCUBA diving off Key Royal Bridge on Anna Maria Island and found a bicycle, mail box, fishing nets and a shopping cart,” he said.

Brown was talking with fellow SCUBA diver Cheryl Huntsinger about his dive off Key Royal Bridge and they decided to organize Suncoast Aqua Ventures.

“We came up with a competition of using a clean up to give others a challenge (similar to a fishing tournament) and do something socially responsible,” Brown said. 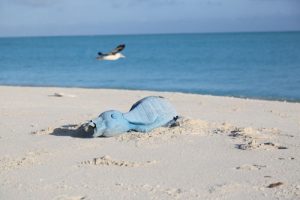 NOAA MARINE DEBRIS PROGRAM PHOTO
Participants of the Suncoast Reef and Beach Clean Up will be picking up litter on Oct. 8. Shown is a toy motorcycle that washed up on the sandy shores of North Beach on Sand Island.

Huntsinger said she started fishing in the North Atlantic with her father when she was about 8 years old and was onboard with the clean up and completion idea right away.

She is co-chair of the Suncoast Aqua Ventures and has been a certified SCUBA diver for more than 25 years.

“My passion is the saltwater environment,” Huntsinger said.

She has been involved with the local chapter of the Coastal Conservation Association, a national organization of recreational anglers, for more than 16 years.

When she first moved to Florida from New England 22 years ago, Huntsinger also got involved with several turtle watch programs.

“I’ve always been an advocate for the environment,” she said.

CCA Florida is one of the sponsors of the Suncoast Reef and Beach Clean Up.

“We can always use more sponsors,” Huntsinger said.

The Bradenton Yacht Club, Bradenton AutoNation Ford, Suncoast Metals, USA Dumpsters and the City of Palmetto are also helping out as sponsors. 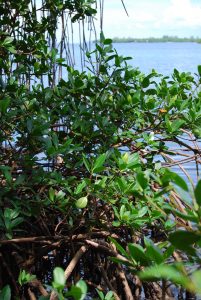 CARL MARIO NUDI PHOTO
The Suncoast Aqua Ventures, a nonprofit organization, is sponsoring the Suncoast Reef and Beach Clean Up on Oct. 8, along shorelines and offshore at places such as the mangroves in Emerson Point Preserve.

“This is a good project,” said Palmetto Mayor Shirley Groover Bryant. “This event aligns perfectly with our concerns with the environment and what we’re doing in the city. It’s a perfect fit.”

The city has completed several projects that have helped the environment, including stormwater system improvements, construction of a living reef along the rebuilt seawall at the fishing pier and the green paver parking along 5th Street West.

“Hopefully more people will realize we all have to be caretakers of our environment and make sure to clean up,” Bryant said.

George Gordon, general manager of the Bradenton Yacht Club said he was looking forward to the clean up, which will be based at the yacht club, 4307 Snead Island Road, Palmetto, during the three-day event.

“This will be good for the community,” Gordon said. “We anticipate at least 200 participants.”

At 7 p.m., Friday, Oct. 7, there will be a Captain’s Meeting, where the teams will be given instructions, score cards, gloves, trash bags and free T-shirts.

The next day, Oct. 8, the teams will head out on their boats to scour the shorelines and offshore waters for litter and trash.

The target areas include the reefs off Manatee and Sarasota counties, the waters around the Sunshine Skyway fishing pier, and the shorelines of the Manatee River, Braden River, Terra Ceia Bay, Snead Island, Rattlesnake Point, Bishop’s Harbor and Emerson Point Preserve. 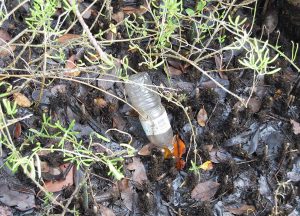 CARL MARIO NUDI PHOTO
On Oct. 8, volunteers of the Suncoast Reef and Beach Clean Up will be picking up litter, such as this plastic water bottle discarded at Emerson Point Preserve.

At 2 p.m., Sunday, Oct. 9, all the collected trash will be weighed and logged at the Bradenton Yacht Club, after which the prizes will be awarded.

As a SCUBA enthusiast since he was in the eighth grade, Brown was ardent about including the trash below the surface in the clean up event.

“There’s tons and tons of litter under water,” he said. “Around the Skyway South Fishing Pier there’s a lot of fishing lines, weights and tackle boxes.”

Brown said membership in Suncoast Aqua Ventures was open to anyone who has a concern about the shoreline and water environment.

“If you look at Emerson Point or Robinson Preserve, that’s what Florida used to look like,” he said. “And that’s what we want all of the shoreline to be.”

For more information about the Suncoast Reef and Beach Clean Up or the Suncoast Aqua Ventures, visit facebook.com and search for “Suncoast Aqua-Ventures,” call Troy Brown at 941-737-3166,  or email oceandiver1962@aol.com. To contact Cheryl Huntsinger, call 941-962-1488, or email cherylh@americasofficesource.com. To contact Steve McNutt, call 941-209-2099, or email steve@completeccs.com.